Why The School Calendar Needs The Church Calendar 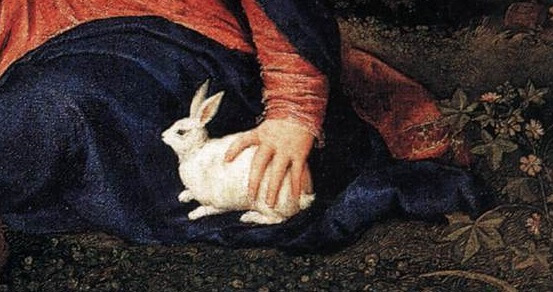 Anyone who has taught or taken an art history course has come smack up against the strange language of nature known only to painters and their disciples. Fruits, trees, flowers, and animals feature in depictions of the Annunciation, the Nativity, but also in allegories which invoke Greek and Roman mythology. The Virgin Mary is sometimes depicted closely clutching a rabbit on her lap. Lemons are similarly typical of Mary. Flora and fauna obtain their meanings in a variety of ways. Many fruits become symbolic of feast days or persons whom they appear near in Scripture. In Nature and Its Symbols, Lucia Impelluso writes:

In the sphere of iconography, the cucumber is often associated with the image of the Virgin Mary, to imply that the Mother of Christ was never touched by sin. The idea derives from a passage from the prophet Isaiah, which says: “And the daughter of Zion is like a booth in a vineyard, like a lodge in a cucumber field, like a besieged city.” The image of the besieged city was seen referring to the figure of the Madonna who, though surrounded by sin, remains apart from it…

Elsewhere, Impelluso suggests pears are symbols of fecundity because the pear itself appears like the body of a pregnant woman, smaller at the top and roundly swollen below. The cypress tree is a symbol of death because it shoots straight up in the air, like the soul of the newly dead returning to God.

At the same time, many natural objects have meanings married with the seasonal cycles. This or that flower is symbolic of the Annunciation because it tends to bloom in late March. Lemons are symbols of “amorous fecundity” (Impelluso, 137) because the lemon tree produces fruit all year. Anyone who knows anything about rabbits will not have a hard time guessing why Mary holds one of the animals tightly.

For the most part, nature becomes meaningful because man studies and knows the earth, and because of scarcity. When fewer and fewer men farm, the meaning of flowers and fruits becomes obscure. When people today hear that, in old paintings, oranges are symbolic of purity, they think, “How perfectly arbitrary.” This is because we live in cities, do not farm, and do not connect the orange with its white blossoms.

Nature no longer creates meaning, stores do. Stores have become nature. We know the changing of the seasons not by the leaves, the produce, the weather, but by the appearance of new colors of supermarket advertisements. Ads mimic the natural changes we would be seeing if we were yet farmers, however, the changing colors of ads strike us as arbitrary. Garish black and orange goods now appear in late August, already in preparation for Halloween.

When I was a child, everyone moaned that the day after Thanksgiving was yet too early to bring out the red and green goods, but now the Christmas colors are printed, stamped, and for sale before the end of October. The changes of the Consumer Year (which has become the most dominant of calendars— it has easily superseded the Church Year, the Academic Year, the Fiscal Year) depend very little on the temperature, the earth, but emerge out of board rooms and stockholder meetings. We are no longer servants of an earth which helps us determine the meaning of things. Cold storage, freezers and factories could effectively recreate an 18th century Christmas during the dog days of Summer, if we preferred. If the dangers of winter air travel ever become too much for us, I would not be surprised if we simply switched the date of the Nativity with the 4th of July. There are precious few fruits, flowers, beers or cheeses which cannot now be acquired on any and every day of the year; there is no feast for which we lack the goods to celebrate at any time we choose.

The scarcity which formerly created meaning— which helped us understand nature as the revelation of God’s personhood and goodness— has been exchanged for a permanent and dense Plenum of goods. The decision to only sell Oktoberfest beer in Oktober strikes us random, haphazard. Oktoberfest seems nothing more than a name for beer sold between the end of September and the beginning of November. A fattened Christmas goose can fairly be enjoyed during the Apostle’s Fast, if you like. A blessed feast of St. Nicholas to you— here, have a summer ale.

We are displeased that God has “made everything beautiful in its time,” and would like Him to make everything beautiful all the time. “A time for this, a time for that,” teaches Solomon, but we object: “Let us drop the times, but keep the this and that.” Our dominion over the earth has made us slaves to appetite, for outside of time and rhythm, our appetites need never change or abate. Patience, that virtue so important for finite creatures, has proven bad for business and so the need for patience has been zeroed out corporations which can get rich by doing so. Without time, ceremony becomes impossible. There can be no contemplation— no deliverance from time— when there is no time in the first place.

We must, then, become more deliberate in the way we manage time in our classrooms. The world has resisted the government of the spheres, but teachers must return to the spheres and submit. The school year must be wrestled from the Consumer Year and given back to the Church Year and back to the Natural Year. Homework on Wednesday and Fridays and lots of homework during Great Lent and the Nativity Fast, but none otherwise. Patient preparation for major feasts in the classroom, and cessations from labor when the feast day comes. This will hardly solve our problems, but it will show God we are in earnest.