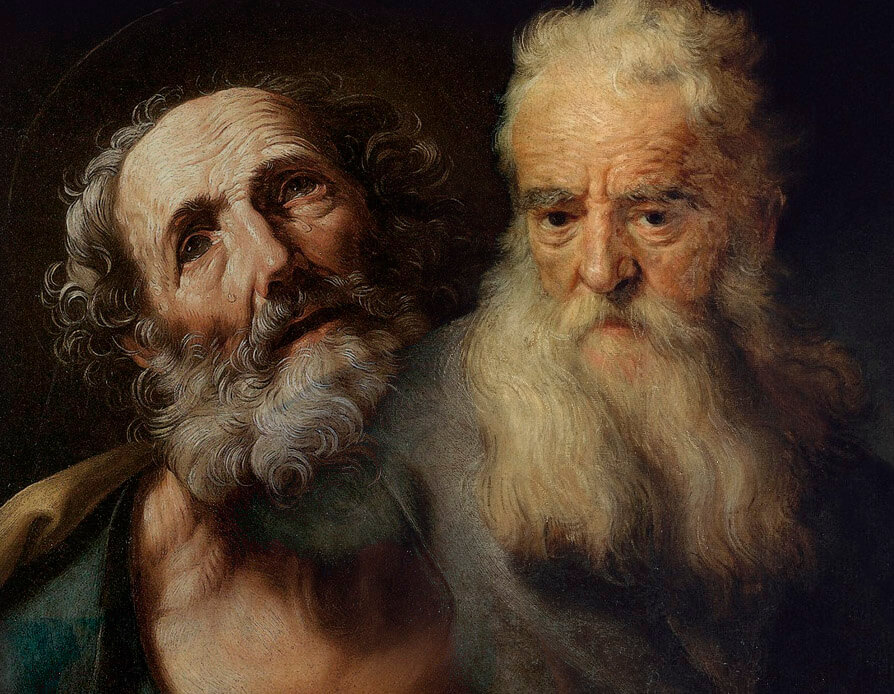 When our Lord was crucified and buried, the disciples were traumatized and frightened beyond the imagination of the suburban American writing this post.

When He ascended into heaven, however, they were not sad or frightened. We learn mostly from Luke that they returned to Jerusalem rejoicing, that they “were continually in the temple praising and blessing God,” and that they went up into the upper room where they “continued together with one accord in prayer and supplication.”

It was there that, ten days, after Christ’s ascension, that He sent His Holy Spirit to the disciples and recreated the cosmos.

In my previous post, I suggested that, “Having received the Holy Spirit and having experienced the initiation of a new Creation, Peter’s first sermon lays out the gospel in such a way that the rest of the New Testament is nothing other than a development of what Peter says applied in various contexts, both on heaven and on earth.”
I should have said, “Peter, in his first sermon,” but assuming you forgive my grammar faux pas, I will try to defend this notion.

• In Romans he begins chapter one with a fairly detailed introduction to the gospel, saying, “which He promised beforehand through His prophets in the Holy Scriptures [cf. Psalm 110/09 in my previous post], concerning His Son Jesus Christ our Lord, who was born of the seed of David according to the flesh, and declared to be the Son of God with power according to the Spirit of holiness, by the resurrection from the dead. Through Him we have received grace…” This resurrection power and our union with Christ, by which we experience it, are the theme of this letter, beginning to end – just as they were in Peter’s sermon.

• In I Corinthians, the Apostle rebukes the Corinthians for thinking and living as though Christ is not risen and has not secured all the gifts His church could ever need. Among those gifts must be included the apostles (Eph 4), but they even argue over that.

• In II Corinthians, he describes the glorious ministry of apostleship (a ministry of human weakness and divine power) that is itself a ministry of the Christ-given Holy Spirit and of the message of the new creation secured by the abundant grace dispersed abroad. This is precisely what St. Peter was proclaiming.

• In Galatians, he rebukes them for living as though they are not sons and heirs but slaves; he entreats them not to turn back from the given Holy Spirit (He who was promised by the Father through the Son and given after the Ascension) to the flesh.

• Ephesians is extraordinary. The things he could not tell the Corinthians, he tells the Ephesians, things that can only be understood spiritually and by a united church. Here he describes how high Christ ascended above every name that is named and beyond all the heavens, so that He could fill all things; how He created the Church as “the fulness of Him who fills all things”; how He made Jew and Gentile one new temple, made a new man in Himself, allowed us to offer ourselves as a new offering, and sent to His bride the gifts needed for Her to be a pure and unwrinkled, unspotted bride, and a man grown to full stature. In other words, he expands on St. Peter’s point that the Christ ascended into heaven and was made “Lord and Christ.” As St. Peter said, “Therefore, being exalted to the right hand of God, and having received from the Father the promise of the Holy Spirit, He poured out this which you now see and hear.” Nobody was taught more about this than the Ephesian church, because they could be.

• In Philippians, St. Paul describes how Christ earned His exaltation and how we can also think and act like He did, letting this mind be in us, which was also in Christ Jesus. If we suffer with Him, we can share in His resurrection and His glorification, but we must not turn back and try to establish a righteousness of our own through a law that is fulfilled.

• In Colossians he describes where Christ is, namely, “seated at the right hand of God,” reminding them that they are in Him there and must think and live like it, refusing to succumb to anything that falls short of Christ. They are raised with Christ, so they should seek the things that they can find, “where Christ is, seated at the right hand of God.”

• In I Thessalonians, he reminds the church that he came to them because the Holy Spirit had been poured out on all flesh (they were a Gentile church) and he came with the Holy Spirit and love, not with flattery. He reminds them that the Christ who ascended, “will descend from heaven with a shout, with the voice of an archangel, and with the trumpet of God.”

• In II Thessalonians he cautions the church not to lose the joyful hope of His return and reminds them that He will vindicate those who are faithful.

• In Philemon he accomplishes something of a reversal. In every epistle to this point, Paul has said that we should rejoice in sufferings, submit out of love, and, in effect, laugh at pain because of what it is achieving for us. In Philemon he addresses, not the suffering slave, but the master. It is the only letter in the New Testament by St. Paul that does not explicitly mention Christ seated in heaven and/or coming back. And yet, he says to Philemon, “I am sending [Onesimus, your runaway slave] back. You therefore receive him, that is, my own heart… For perhaps he departed for a while for this purpose, that you might receive him forever, no longer as a slave but more than a slave–a beloved brother.” The world is turned over and captives are set free.

The Apostle Paul never, ever forgets that He is writing to and building a church that has been formed by the resurrected Christ who was received by the Father and is seated at His right hand. It is from the Father that He received the gifts that He poured out ten days after His Ascension into heaven.

Before the disciples received the Holy Spirit, they waited ten days, worshipping continually in the temple with great joy and praying together in the upper room: “with one accord in prayer and supplication, with the women and Mary the mother of Jesus and with His brothers.”

I propose that we do something like that ourselves. We cannot fulfill this mission without the Holy Spirit, and while in one sense He has already been given to the church, there is another sense in which there is nothing we should do more than seek Him. Perhaps over the next few days we can pray and supplicate, worship and adore Him, looking eagerly for Pentecost, or, maybe even, His Return in Glory, which we pray for every time we obey Him by praying, “Thy Kingdom come.”