On The Incarnation: Christ The Moon, The Pelican, The Apple Tree 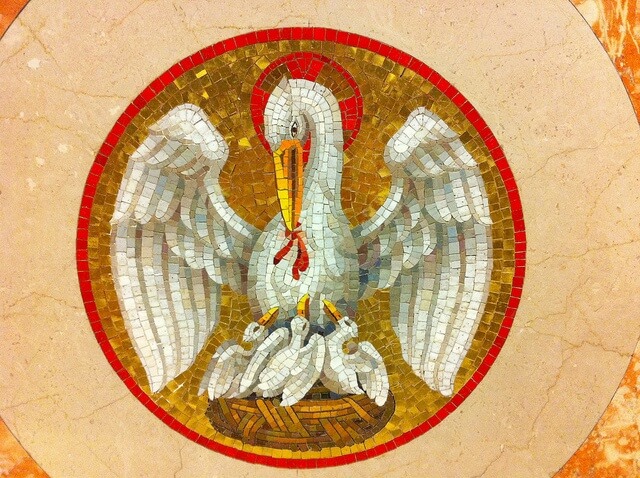 For by His own power He is united wholly with each and all, and orders all things without stint, so that no one could have called it out of place for Him to speak, and make known Himself and His Father, by means of sun, if He so willed, or moon, or heaven, or earth, or waters, or fire…

-St. Athanasius, On The Incarnation, Chapter 42

To paraphrase, the Second Person of the Trinity need not have come as a man. He could have come as a moon— a speaking, teaching, feeding moon. St. Athanasius suggests in another place that the Word became a Man because men had begun to worship men. “If they want to worship a man,” reasoned the Condescending God, “I will give them a man worthy of worship.” While God’s decision to reveal Himself finally as a man was not arbitrary, neither was it inevitable. God might have revealed Himself fully through anything, for “He is united wholly with each and all.”

Christ the Moon. Christ the Fire. Christ the Mountain. Many theologians have intuited these claims of St. Athanasius and run off to somewhat obscure corners of creation to find God. In one place in the Paradiso, Dante refers to Jesus Christ as “our Pelican,” a reference to the legend that the Pelican will peck a hole in her own body to feed blood to her starving young. In like manner, man starves for God, and Christ opens up His own side and feeds us His blood. A somewhat obscure English Christmas carol describes Christ as such:

In the Nativity story, the sign of the Christ is always familiar to the hearer. The sign for the astrologers was a star. The sign for the shepherds was a feedbox. The sign for the Righteous Joseph was a dream, and who was the most famous dreamer of the Old Testament? The Incarnation is not only God entering the life of man as a Man— the Incarnation is the revelation of an omnipresent God Whose being is poised to bloom out into creation wherever and however and in whatever He will choose. As Alexander Schmemann observes in For The Life of the World, the Christian holy is not like the pagan holy. For the pagan, a holy thing is a thing in which god dwells. For the pagan, the holy is “Here, not there.” The holy is “This, not that.” This is simply because pagans have localized gods— gods which are here, not there. For Christians, though, God is in all places, filling all things. Holy things are not set apart from common things. Holy things are not set apart to reveal their own holiness, but the holiness of all things.