Death At A Party: December 28th, Feast Of The Holy Innocents 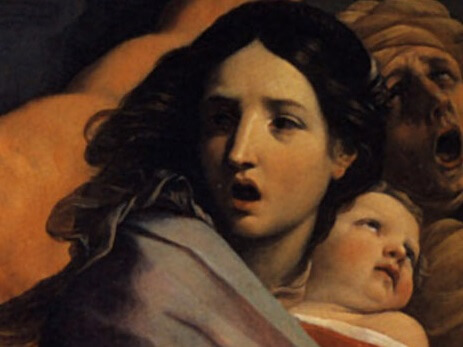 Whoever you are, I wish you had the week between Christmas and New Year’s off. This week is suspended above and beyond real time. This week is as close as we get to sacred time outside of Church. This is surplus time. Fat time. Slush hours. The excess of Cronos.

Morose time. How can we have so much plenty against the suffering of others? I will buy the gluttonous Sunday Edition of the New York Times on Sunday the 25th and crack open a bottle of Spanish red. Life is awful for most people on planet earth and the prophets on the Opinion page predict the worst for the year to come. The cult of various false gods are set to do us in and I believe it. The Devil said it. I fear it. That settles it.

The Christ comes on the darkest day of the year, and from that point forward the days grow longer. But don’t make too much of it, yet. We are not allowed to remember the dead Innocents before Christmas and get them out of the way. Their feast day comes on the fourth day of Christmas. In the middle of dinner, the dead children come to the door. The dead knock between toasts to life. We peer out the glass window, but it is fogged over, and when we pull back on the handle, they lay in piles on our front porch. The Christ has come with a price.

The Holy Innocents prepare us for the next feast day, which is devoted to Janus, the god who saw past and future and little disparity between the two. Dead infants in their time, dead infants in our time. The murder of the guiltless is an ancient human preoccupation. We get fidgety and the good die. Pay two mites for a newspaper and the fourth page has a story of a man who murdered his family. Our day and age is every day and age.

We know that Christmas is somehow solemn, but Americans are at a loss for talking about the Holy Innocents. They intrude into our triumph with their pathetic failure to live. We have tried to celebrate them during the Advent fast, but they refuse to be honored during times of leanness. We will only be known during times of gold and perfume, they say. We have borne the brunt of the war on Christmas, they say, and do not care for your cool dismissals.

In the fat time between Christmas and New Year’s, we have time to make room for the Holy Innocents. We need an hour to listen to Faure’s Requiem and imagine we are the dead, traversing each of the seven movements of music like spheres of the heavens until we are delivered into the Empyrean. We need the darkness to crowd out the light for a moment. We need these long, empty, meandering afternoons to think of nothing on behalf of those who never knew. We need the butterscotch to lemon in our mouths just a little, the sweet milk to curdle, the apples to oxidize brown and unpicturesque for the sake of those cut down before their time. The Christ did not come for free. The little children joined Abel and bought Him to us.

We do not know what to say to the Holy Innocents, so we say nothing and complain of Christmas depression. We sense amid the celebration that some who ought to be with us are not present. We know that our joy can only be complete by ceremonially acknowledging that it is incomplete. We know that, soon enough, the tree will be stripped naked and burned. We know that January is the month fitness clubs make all their money, as the fatness is taken back by a want for leanness, sleekness, nothingness. The party will soon drain from our flesh, and if it will not, so much the worse for our spirits.