Why Do We Have To Wear Uniforms? 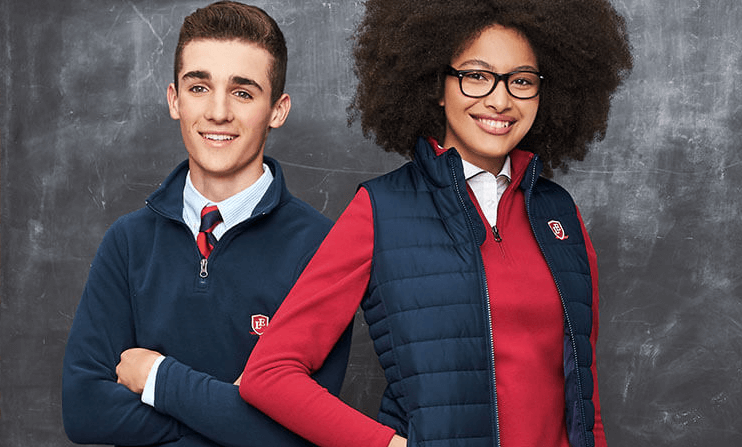 Student: Why do we have to wear these uniforms?

Gibbs: Would you like to make an argument against uniforms?

Student: God made every human being to look different. If God is comfortable with us all looking different, then why try to make us all look the same by wearing uniforms?

Gibbs: I am glad to see you begin with a theological-ish argument. What exactly do you mean that God made every human being to look different?

Gibbs: It’s true that no two human faces are exactly the same, but I cannot possibly agree that human beings all look different from one another. Human bodies follow the same form. Head on top, arms on the side, feet on the bottom. One ear on the left, one ear on the right, nose above the mouth. Thirty-two teeth. Human beings are designed according to a strictly observed pattern.

Student: But we’re all different on the inside.

Gibbs: I doubt many doctors would agree with you. If everyone was different on the inside, a surgeon would have to reinvent the wheel every time he performed an appendectomy. The fact of the matter is that a surgeon knows right where to make the incision, because your guts are quite a bit like everyone else’s guts.

Student: I meant that so far as the spirit goes, everyone is different. No two souls are the same.

Gibbs: Classical educators are not terribly interested in the ways that everyone is different. That is a mantra of public school educators. Classical education is interested in virtue, in the human things, in transcendent things, in divine things. All people need to love God, love what is good, and hate what is evil. Teenage Christians are generally prone to the same temptations. Boys are tempted one way, girls another. The spirit of our age wars against us, the days are evil, and we all must redeem our time.

Student: Is it not insulting to claim that all people are the same?

Gibbs: I didn’t say that all people are the same. I simply claimed that classical educators are far more interested in what human beings have in common than in what makes each human being distinct. Every one of my students is unique, but the uniqueness of each student has very little influence over how I govern my classroom or deliver my lectures.

Gibbs: Because a classical education is about growing in virtue, not self-fulfillment or self-discovery. “Don’t be yourself. Be good.” You’ve heard me say it a hundred times before.

Student: If you want to argue that virtue is universal, I would agree, but don’t you still have to teach that universal thing to individuals?

Student: So they should wear their uniforms after they leave class? That’s ridiculous.

Gibbs: Students desperately want to wear uniforms outside of class, they just don’t want to wear their school uniforms.

Student: I only have one uniform.

Gibbs: I don’t believe that is true. When students complain about wearing uniforms, they often argue that they want to express themselves. I always find this a strange claim given that students at this school are basically allowed to express whatever opinions they like during class. Teachers invite students to express themselves with theology and philosophy in the classroom— say what you like about Dante, free will, tattoos, animals going to heaven, and yet so many private school students complain, “But I want to express my unique individuality by wearing these jeans that were mass produced in a Chinese factory!” At this moment, there are far fewer teenagers in this city wearing the standard issue Land’s End gear you currently have on than the Hollister gear you’re so desperate to put on. You simply want to trade one uniform for another. That Hollister gear is simply dictated by a different authority.

Student: If you love uniforms so much, what’s wrong with another uniform?

Gibbs: The problem is that you don’t see the Hollister gear as a uniform. You’ve been lied to.

Student: So what uniform do you wear outside the classroom?

Gibbs: I try to look like someone who should be taken seriously, and I try to dress in a way that will please my wife. I generally dress in such a way that people will not comment on it one way or another.

Student: What if I said my Hollister gear does the same thing?

Gibbs: Perhaps. Your Hollister gear makes you invisible to your friends, who dress the same way. They think you look “normal.” In school, however, a uniform makes you look normal, and helps your teachers take you seriously. I want to treat all my students according to the dignity of their calling as students, and I want to treat them all equally.

Student: You don’t want to treat them all differently?

Gibbs: Would you prefer I play favorites?

Gibbs: What’s wrong with everybody else?

Student: Nothing. Difference doesn’t necessarily imply a hierarchy, though. You have two daughters. You treat each one differently, I suspect, but that doesn’t mean that there’s something wrong with one of them.

Gibbs: A fair point. One of my girls loves animals, the other does not, and this fact is reflected in the way I buy them Christmas presents, and so forth. One of my children is arrogant, while the other is stubborn, and I must keep this in mind when I discipline and correct them. Nonetheless, the most important and fundamental facts about my children are things they share in common. They are both made in the image of God. They are both called to love God by keeping His commandments. They are both called to store up treasure in heaven and seek virtue. They are both sinners. They are both Orthodox. They both have bad taste and need to be taught to appreciate good things. They are both hungry. They both get cold in the winter, and when either of them gets a nasty cough which won’t go away, a trip to the doctor is necessary. Are they different? Yes. One is more like Abbot, the other more like Costello. Nonetheless, so far as the most important things are concerned, they are the same.

Student: How are those “the most important things,” though? Is not one of the most fundamental human needs the need to be known?

Gibbs: I am not cold to your concern here. Yes, a human being needs friends. We need love and loving someone means knowing that person well. Each human being is an unrepeatable revelation of the infinite God, and to lose one human being forever would mean losing some knowledge of God forever, as well. For this reason, the death of any human being is a cosmic scandal. But while a human being needs friends, it is not the role of a teacher to befriend his students. There should be kindness and generosity shared between teachers and students, but the extreme differences in authority, maturity, legal standing, and station in life make friendships between teachers and students very confusing for both parties. Uniforms elevate and formalize behavior, which is no less vital for a teacher than for a police officer.

Student: But dress codes and uniforms are different.

Student: So, we’re pretty far away from talking uniforms at this point, but I have to ask what’s wrong with friendship between teachers and students?

Gibbs: I don’t actually think we’re that far away from discussing uniforms. Uniforms are a charge to students to act according to their shared purpose, which is growing in knowledge and virtue. Growing in virtue is the great reason you’re at this school, and thus your uniforms are also a charge to your teachers to treat you according to your shared purpose, which is a lofty one.

Student: They can’t remember that purpose simply because we’re wearing blue jeans? Does that not seem petty?

Gibbs: The way we dress is important. If dress were not important, you would not be so insistent on your desire to wear what you want. Americans are slaves of the god Casual, though. If we allowed students to wear what they liked, pretty much no one would dress above the current uniform. It would be jeans and trendy untucked shirts.

Student: What if we did dress higher than the uniform?

Gibbs: You don’t. That’s another reason for the uniform. Ask any teacher about non-uniform days at this school, and they will tell you they get half as much done in class. On the other hand, most schools have regular uniform days and dress uniform days. I make it a point of giving tests and quizzes on dress uniform days, because the work students turn in is always higher when I do.

Student: It’s almost three-thirty. I guess I’ll head home and put on my other uniform.

Student: Alright, Gibbs. You be normal, too.