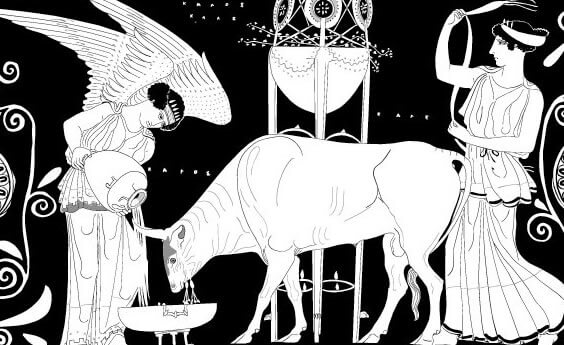 Towards the beginning of his book, Cooked: A Natural History of Transformation, Michael Pollan notes that Henry Fielding once referred to The Odyssey as “Homer’s wonderful book about eating”. As a wannabe chef I love this; as a literature enthusiast and student I’m intrigued by it. And I think we get our first glimpse of this possiblity here in book three.

All but the very beginning and the very end of this book take place around a dinner table, around a feast, and we get grand descriptions of animals being roasted on and removed from spits, of mixing bowls full of wine, and thigh bones wrapped in fat. (I Imagine that last one must be something like bacon wrapped filet mignon.) But most importantly, for the sake of the book, we are introduced to the importance of sacrifice towards the gods.

Already, in the first two books, we’ve seen clearly that the gods control the story. They control the comings and goings of our various characters, either by eliminating them altogether or by making their homecomings difficult, and they control the effectiveness of a character’s ability to communicate, as with Telemachus. They control the weather and the harvest, the cities and the wars. They control love and hate and life and death and everything in between. The lesson, of course, is that it’s best not to make a god or goddess angry. And that is where sacrifice comes into the equation.

Pollan speaks to this in Cooked when he writes that “Apparently the same perfume [the smell of meat cooking over smoke] is equally pleasing to the gods . . .”. And, as Pollan notes, animal sacrifice is by no means a purely secular practice. The story of Cain and Abel centers on sacrifice (or lack thereof), and, of course, the “sweet savour” of Noah’s “burnt offering” caused God to decide to never again destroy every living thing.

In our times animal sacrifice is, at most, a foreign thing, and it’s certainly considered pagan. But I think anyone who considers themselves religious in any way can sympathize with the desire to please a deity (of some kind). In most cases this stems from fear of retribution as it did for Nestor when he sacrifices a veritable feast to Athena following her departure from his home in the form of a vulture – which would be terrifying by the way.

This sequence is interesting, I think, because at no point does Nestor saying anything to the disguised Athena that is disrespectful or blasphemous. Indeed the old man is nothing but respectful to the gods, and to Athena in particular. Yet when she departs he immediately lifts a prayer to her requesting her graciousness. But this is a culture, and thus a book, that is obsessed with the ramifications of gods full of wrath. It’s a culture and a book made up of characters who are hyper aware of their own limitations in the face of potentially devastating power. Exhibit A is the Iiad, where the wrath of the gods – towards each other and towards the various characters – is, well, just that: devastating.

And here in book 3 of the Odyssey we are continually reminded of the power of the gods. There’s a reference to the “Earthshaker” and when Telemachus and Athena (dressed as Mentor) disembark their ship at Nestor’s place Homer makes a point to mention that the goddess “went first”. But then we get this from Athena, beginning with line 25:

“Then in turn the gray-eyed goddess Athene answered him:
‘Telemachos, some of it you yourself will see in your own heart,
and some the divinity will put in your mind. I do not
think you could have been born and reared without the gods’ will.”

Then Homer tells us, “So spoke Pallas Athene, and she led the way swiftly, and the man followed behind walking in the god’s footsteps.”

Now, this is a loaded passage, and that’s without considering the various “gender studies” stuff one could talk/write about, and which has been explored at length in other places. But I am continually struck, as I reflect on these early books of the Odyssey, how little of Telemachus’ path is paved by Telemachus himself and how often Homer reminds us that we humans are at the mercy (read: whims) of the gods and their jealousies.

As I mentioned in my previous post these first four books are commonly referred to as the Telemachy for the ways in which Telemachus changes. But, as is true with any great story, they also set the scene and introduce the key themes of the work. And it’s clear that a theme to keep an eye on is man’s smallness, if you will, in the shadow of the power of the gods.

And that’s why, I think, the Odyssey makes a big deal out of food. Because, while food does indeed taste great, it’s also the one thing, when cooked properly, that can appease the anger of an vengeful god.