Before We Judge Our Idiot Ancestors… 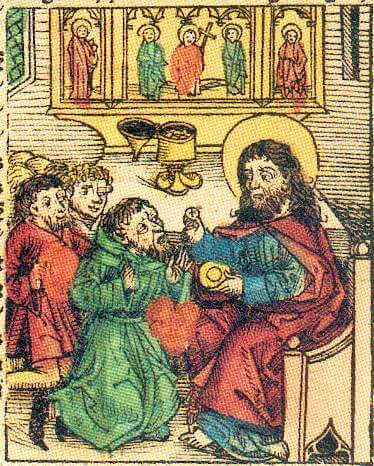 Note: the intent of this essay might be best discerned in the titles which I discarded in favor of something more direct. The post might have been titled “Forced Conversion”, or “The Medievals Drank Beer For Breakfast”, or “The Letter of Prester John”, or “The Hagia Sophia”, or “Trials By Ordeal.”

What follows is a conversation which might occur in a university classroom sometime in the middle of the 4th millennium AD.

Dr. Azarov entered the classroom a few minutes after the scheduled start time, set a stack of books on his desk and addressed the class after offering a word of prayer.

“Today, after six weeks of study, we’re finally finishing Arefyev and Hamilton’s The Late Modern Era. Reflecting on our reading, if you had to give one word to describe the Late Modern, roughly 1914 through 2118, what would it be?”

After a pause, one young man said, “Dr. Azarov, I wanted to ask about an image in the text. A photograph on page 217. The note beneath the photograph merely states it is an image of “an American personal residence, c. 1970.” What kind of a room is this in the picture?”

After turning to the appropriate page, the professor replied, “It appears to be a bathroom, Karl.”

Karl replied, “I see the bathtub. I also see two sinks. One appears to be a sink for adults, the other a sink for children. Is this right?”

“No. Both adults and children would have used the elevated sink. The other “sink” is a toilet.”

This comment elicited a murmur of surprise from the students.

Dr. Azarov smiled, perhaps a little embarrassed on behalf of the Late Moderns.

Karl replied, “I thought germ theory was well established by this point in history.”

With the same smile, the teacher said, “Yes, it was.”

Karl was circumspect a moment, thinking it over, then hesitantly returned, “Are there any other interpretations as to what the object next to the bathtub is? I find it hard to believe that any sane person would put a toilet inside their personal residence after the development of germ theory. What I mean is… Aren’t we supposed to assume that people are reasonable? You’ve said so many times. We should assume that the actions of any bygone people make some kind of sense, even if those decisions are ultimately immoral. It makes no sense to put a toilet in a home if you’re familiar with germ theory.”

When the professor heard Karl reference the maxim he had taught them all about assuming the rationality of bygone eras, he nodded.

“Of course. And we should assume that it made sense to Late Moderns to put toilets in their homes—“

Karl interrupted, “Did Christians do this, as well? I can believe that the muddled thought which attended atheism might lead someone to put a toilet in their home, but for someone whose mind was illuminated by baptism, this seems obviously and manifestly nonsensical. Downright foolish.”

Another student mused, “Was this practice common among the poor? Perhaps people with toilets in their homes couldn’t afford to install a place outside their home for a toilet.”

Dr. Azarov shook his head and said, “No, as far as I understand it, even the wealthy had toilets inside their homes. Even wealthy Christians.”

Karl masked his incredulity with a mild tone and said, “Didn’t this lead to an increase in disease?”

The question was not in earnest, but rhetorical.

“It’s hard to say for sure, though I would assume so. And people of the Late Modern knew that the toilet was… filthy. Many Late Moderns kept toxic chemicals in their homes to clean toilets and… bathrooms.”

Karl found this preposterous and threw out, “Wouldn’t children get into those chemicals and become ill? Die?”

“Yes. That happened frequently enough it had to be dealt with. And so you have a remarkable number of hospitals being built during this time to take care of the sick, and experts in poison-related sicknesses who were specifically charged with the care of children who accidentally ingested these toxic chemicals.”

Disappointed that the typically reasonable Dr. Azarov was failing to engage history in a manner in accord with principles of generosity, Karl sighed and said, “This seems like madness, though. Why not simply remove the toilet to a place outside the home so that the filth was safely contained elsewhere? Are reasonable Christians honestly defecating in their homes, exposing themselves to the stench and the germs, and then endangering their children with toxic chemicals to clean up their own filth— filth which they voluntarily bring near to themselves?”

Sensing that the class was losing confidence in his knowledge of the past, Dr. Azarov appealed to another principle he had taught them.

“I don’t imagine it struck them that way. Everyone had a toilet in their home. Having an outhouse would have seemed primitive, as odd as that sounds. There is something intuitive, unexplainable to their logic which is inaccessible to us simply because we are so far removed from the norms of Late Modern life. The rationale for installing a toilet beside the bath is bound up in a host of other oddities and particularities to the Late Modern mind. If we asked them why they had toilets in their baths— that is, near their baths— they might have pointed to a periodic table, as though the periodic table made sense of the indoor toilet. I’m shooting from the hip here. I don’t know what they would have pointed at. You won’t find any document from the Late Modern period where a common man thought to justify it.”

Feeling a need to keep particular historical sureties in place, Karl replied, “But surely the really brilliant minds of the Late Modern saw through this… That a common Christian would fall prey to such thought seems like less of a stretch… But surely not… C.S. Lewis? David Bentley Hart? Surely these men recognized how appalling it was to relieve yourself a few feet from the place where you washed your filth away, dressed wounds… brushed your teeth.”

Karl’s final observation warranted a few curled lips from young ladies who looked at one another sympathetically in comic disgust.

Dr. Azarov smirked as well and waited until the class had regained composure. He held his palms up, steadying everyone.

“Let me call your attention to something apparently unrelated. Turn to… page 615. What do you see?”

The students flipped to the appropriate spot and one student said, “The Nurek Dam.”

“The Nurek Dam. When was it built?”

Dr. Azarov said, “Yes. The same time that the indoor toilet was in fashion.”

A few students, but not Karl, nodded after a moment.

The prof continued, “Today, we lack the technology to make such a thing. We lack the mathematical know-how. Our best engineers marvel at the Nurek Dam, the Tarbela Dam, the Oroville Dam. Given the technology available to Late Moderns, we haven’t a clue how they finished any of these structures.”

Karl said skeptically, “If these dams ever existed.”

Dr. Azarov said, “Sure. But no one in the Late Modern period doubted they existed. No one. They saw pictures of these things and simply nodded their heads. They might have not even been very impressed by them.”

Karl was not convinced and countered with, “Yes, but the existence of dams— and such existence is debated, I hope you’ll concede— in no way explains complete dismissals of common sense.”

“Karl, you’ve done the reading, yes? If so, you know that dams like these are by no stretch of the imagination the only accomplishments the Late Moderns attained to which are unthinkable today. They went to the moon, as well. They had methods of preserving musical performance which seem fantastical. At the same time, not only do some of their technological successes seem the stuff of fantasy… they also achieved certain cultural equilibriums that strike us as implausible. A paper money system, for instance, upon which all men could operate. We lack the— I don’t know— we either lack the naiveté or sophistication to adopt such a system. It seems profoundly convenient to me, though I know that’s an uncommon—“

A student interrupted, “Yes, but the Late Moderns travelled so slowly.”

Dr. Azarov conceded, “Of course, though they didn’t know it. I’d wager that a Late Modern who surveyed transportation systems of our day would be shocked we can’t build a dam like they could. Perhaps we should speak of two different kinds of common sense. Sense which is common to man and sense which is common to an age. It might be that putting a toilet in your home was no less common sense to the Late Modern as the few simple equations (lost to history, that is) which could lead you to the moon. We should not read history like consumers, picking and choosing attractive aspects of this or that ancient culture to revive while discarding the unattractive aspects. When we do so, we never quite attain the beauty of the past anyway. It might be that the unattractive aspects invariably lead to the attractive aspects. Or the discreet logic of the unattractive and primitive culture grants a special knowledge of the attractive.”

I write all this as someone who unapologetically enjoys the use of a bathroom wherein shower, toilet and sink are all situated within a few feet from one another. I can’t imagine why anyone would want it any other way, but then again, I can’t really imagine the future or the past that well.