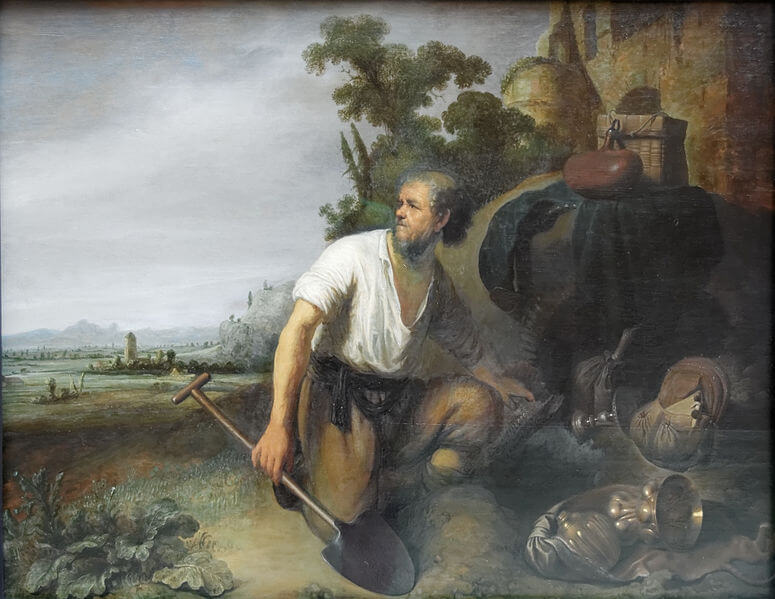 The English language is a minefield of buried metaphors. Take “buried metaphor,” for instance. Standard dictionary definitions treat the phrase as an abstract term, defining “buried metaphor” as a word or phrase that, though originally intended as a figure of speech, has been used so frequently that it now represents a specific concept without the figurative connotation.

For example, if you have ever responded to an explanation by saying, “I see!”, you have used a buried metaphor. Literally, your response made a statement about your eyesight, while what you meant, and what your listener heard, was that you understood. The original “metaphor” of vision has been “buried” beneath the concept of understanding.

This standard definition, however, ignores the plain meaning of the phrase “buried metaphor”: since a metaphor cannot literally be hidden beneath the dirt, that phrase is an example of the whole class of tropes it describes. It subtly beckons us to grasp its meaning by contemplating a related image.

What picture unearths the meaning of “buried metaphor”? A graveyard of overused verbiage haunted by the ghosts of once-vibrant ideas? An archeological dig disclosing the riches of Pompeii in the layered connotations of our diction? A minefield of explosive meanings just beneath the flat surface of words? A field of hidden treasure and pearls of great price? Any of these images communicates or “gets at” the phrase’s meaning much more fully than the aforementioned dictionary definition.

In a similar way, attending to the metaphors buried in our language leads to deeper thinking and more powerful writing. It invites contemplation, precision, analysis, synthesis—many of the very skills which we seek to train through education. Thus, attention to metaphors is a most potent pedagogical tool: through it, one could cherry-pick nearly any subject and plumb the depths of meaning beneath its linguistic surface.

Now, if you’re following along with all this, you may just have realized that that last sentence contained two buried metaphors: “cherry-pick” and “plumb the depths . . . beneath [the] surface.” And, if you’re especially astute, you may have also realized that, unless there exists some heretofore undiscovered variety of deep-sea cherry tree, these metaphors do not work together very well. This is, in fact, an example of another classification: the mixed metaphor. If, in one unit of thought (whether a sentence, a paragraph, or a whole essay), you employ two or more unrelated metaphors to describe the same idea without signaling the transition from one to the next, then you have mixed your metaphors. It’s an easy error to commit and a hard one to notice, but it’s sloppy, and it misses an opportunity for clearer thinking and stronger writing.

Imagine, for instance, that instead of mixing my metaphors, I had said either “While climbing the branches of the linguistic family tree, one could cherry-pick nearly any subject to encounter unexpected flavors of meaning” or “Plumbing the depths beneath the linguistic surface of nearly any term will yield sunken riches of significance.” Either way, keeping the metaphor consistent through a whole unit of thought gives it a coherence and strength that more fully supports the idea communicated.

In light of all of this, I have found that combing my prose for metaphors is one of the most helpful revision strategies for my writing, for it forces me to be attentive to both my words and my thoughts, and, most importantly, the connection between them. And the students with whom I’ve shared this strategy also find it both useful and delightful, as revision should be.

But is there a point to all of this besides developing one’s writing voice? Well, yes. Metaphor is not only, or even primarily, a linguistic device; it is a way of seeing the world. In Time and Narrative, philosopher Paul Ricoeur, who devoted much of his study to an exploration of metaphor, calls metaphor a “work of synthesis” in which the metaphor-maker “inaugurate[s] the similarity by bringing together terms that at first seem ‘distant,’ then suddenly ‘close.’” In other words, metaphors express our perception of the underlying unity of seemingly disparate things. And this goes beyond the level of language to the level of reality itself: Ricoeur suggests that “‘metaphorical utterance [has] power to redescribe a reality inaccessible to direct description . . . ‘[S]eeing-as,’ which sums up the power of metaphor, could be the revealer of a ‘being-as’ on the deepest ontological level.”

Thus, to make or to understand a metaphor is to glimpse a coherence in reality—a reality that today’s dominant narrative would claim is fragmented, accidental, incoherent. Metaphorical perception bolsters the Christian’s declaration to the contrary. It underlies our ability to say with the Psalmist that the heavens declare the glory of God, for it enables us to see the unity by which the Creator is represented in His creation. It allows us to spin poems and narratives, literary forms that express the unity perceived amongst particular emotions and images, characters and events. It forms the shape of our eschatological hope, that the blessings we have known now will be fulfilled in those that are not-yet.

Learning to attend to metaphors, then, is far more than a pedagogical tool, though it’s not less than that. To exercise the metaphorical imagination is to sharpen our sight of the significance of things—the connections and juxtapositions by which our experience is made meaningful, reality’s wholeness glimpsed.