Roland: Can An Army Be Martyred? 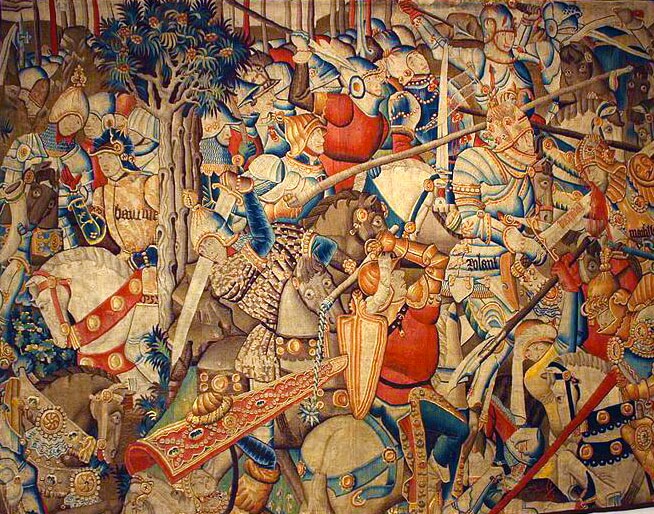 In laisse 79 of The Song, Roland lays out what, in his day, is a fairly unique approach to loss in battle. As the French are standing atop a great mountain, watching a numberless army of Saracens draw near on the planes below, Oliver is insistent they call for backup, but Roland is unphased.

Here must we stand to serve on the King’s side.

Men for their lords great hardship must abide,

Fierce heat and cold endure in every clime,

Lose for his sake, if need be, skin and hide.

Look to it now! Let each an stoutly smite!

No shameful songs be sung for our despite!

[Pagans] are wrong, Christians are in the right!

Ill tales of me shall no man tell, say I!

The Song is thought to have been written sometime in the 11th or 12th century, which makes it the earliest work in the Western canon, to my knowledge, wherein the possibility of a morally neutral loss in battle is suggested. Prior to this, the Christian attitude toward war was largely borrowed from the Old Testament, and when the Jews lost in battle, they returned to camp to begin figuring who had stolen what, or who had slept with his sister. In The Song, however, the French Christians believe they will die because they are in the right. Charles has consented to show mercy to Marsile after Marsile sued Charles for peace, claimed he would convert to Christianity in a month, and offered hostages as proof of his good faith. While the Christians believe Marsile is lying, the French counselor Naimon says the Christians must accept the deal because they are required to show clemency. As Robert Cook notes in The Sense of the Song of Roland, the French are required to treat any offer of peace as genuine if it is attended by hostages. Whether the Christians suspect a trap or not, the hostages must be treated as iron clad evidence of a genuine offer.

With the Saracen army advancing, Roland claims that a Christian must be willing to “lose…skin and hide” for his lord, but also that “Christians are in the right!” Unlike the Saracen warriors who boast that they will defeat the Christians, Roland merely claims that Charles will lose nothing which has not been defended. Roland cares little about winning, but about being in “the right.” His willingness to die while being in “the right” is what Roland believes will earn him fame. Because Roland (and the French with him, for that matter) have willingly chosen a position of strategic weakness- willingly openning themselves up to trickery- their deaths are not simply patriotic, but martyric. The French loss will not be morally neutral, then. For the author of The Song, it is possible for an entire army to die a martyr’s death.

The Christian West was, perhaps, finally able to accept the idea that the righteous do not always win at war because they came to identify entire nations with Polycarp, St. Stephen the Protomartyr, St. Paul and so forth.