Race, Wrongs, And Rejecting The Past 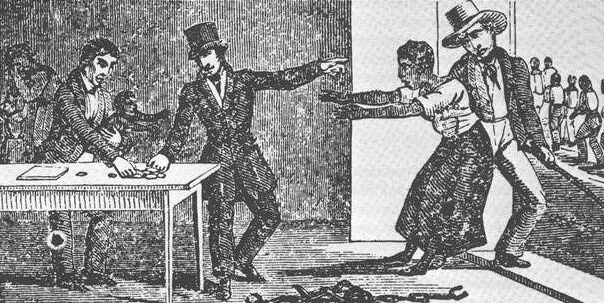 In the many debates currently raging over race in this country, one often hears the claim that the historic, centuries-old wrongs enacted by whites against African Americans still matter. We may not pretend as though slavery did not happen, or that slavery is sufficiently far in the past that we can forget about it. Time does not heal all wounds. Rather, past wrongs ferment like wine and become more potent the longer they sit in the dark.

Those who disagree do not claim that time heals all wounds, but that no white man alive today in America owns slaves, and no black man today is the property of any white man. The awful effects of slavery linger, but the awful effects of many past tragedies remain, as well, and today’s man can barely account for his own sins let alone the sins of his great grandfather.

When the man who wants to bring the past to bear on the present is rebuffed by those who are uninterested and cannot be troubled, he becomes exasperated, for the wounds of slavery still sting and the fact they happened long ago does not mean no ointment is needed today. The man who pleads the past makes a reasonable point. At the same time, the vexation of the man who wants to simply leave the past alone makes sense. However, either position makes sense for entirely different reasons.

As a classicist, I have sympathy for the idea that the past still matters, because society is “a partnership between those who are living, those who are dead, and those who are to be born,” as Edmund Burke opined. As such, we are still partnered with slaves and slave owners today and we may not break our partnership with the past simply because it has become inconvenient for us. Rules do not exist for times when there is no temptation, but for times when temptation has driven us mad, as Charlotte Bronte once wrote. Remembering is the beginning of obedience. Satan’s temptation of Eve begins with, “Did God really say…” The accuser always wants to muddy our memories.

However, I can also understand the man who becomes frustrated at the mention of slavery and the wrongs done to Africans and African Americans. I understand this man, though I do not think he is right. I understand him because he is being consistent. Sadly consistent.

Modernity is built on the soul-crushing vow we have all made to one another to not care about the past. If we have swept slavery under the rug, it is hardly alone collecting dust, for we swept conventional standards of taste and traditional expectations of morality under the rug some time ago, as well. There is no knowledge in the grave, and what the Dead do not know cannot hurt them. The Dead are like the parents who go away for the weekend and Modern men are the teenage sons left to run the house. The Dead have given us strict warnings on what we may and may not do, and so one boy may not disregard the rules unless the other boy agrees to do so, as well. But having winked and shaken hands on the matter, both boys may pilfer father’s liquor cabinet and use the incognito web browser on mother’s laptop until four in the morning.

The wholesale rejection of the past has allowed us unrestricted access to our most favorite vices— vices upon which we have become dependent— and so any modern man who, while flouting traditional moral orthodoxies, suddenly wants to call up the past is a bit like a drunk son threatening to phone his father when his brother punches him in the cheek. “I thought we agreed no parents,” says the other. “I thought we agreed no past,” says the Modern man. If we ask the genie to make men take the past seriously, we will suddenly find the lurid, spiritually slouchy Pottersville around us transformed into a chaste, dull Bedford Falls. I am all for it, but then again, I do not pride myself on being Modern.

The past is a person, and if we want him to have any power, we may not cut him up and keep the limbs and features we like best. No man is fit to be a judge in his own cause, though the past is a judge powerful to hear our cause. If we submit ourselves to the judge for justice, we must be content to accept all his rulings, not merely the rulings which we like or serve us.

But neither am I suggesting that we may not accept any of the past until we can accept the whole thing. Baby steps to the front door. I am no perfectionist, and I can only hope that caring about old, historical wrongs against African Americans is the inauguration of a new diligence in minding the past. As a classicist, I am all too happy to have my fellow Americans looking back.