In Praise of Pranks 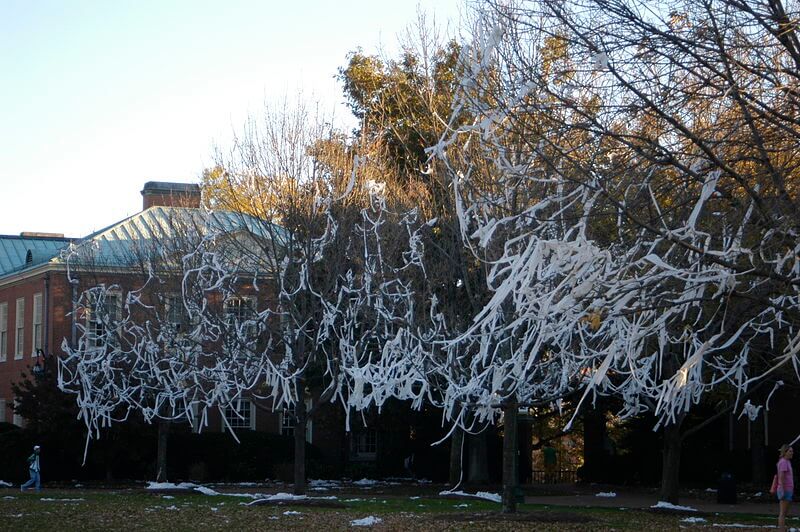 When I opened the window blinds last Saturday morning, I beheld festoons of damply fluttering white streamers draped gracefully all over the shrubbery like festival banners or flags of peace. To put it colloquially, I’d been TP’d (toilet-papered, to the uninitiated) by a crew of freshman boys. That’s the second time this year.

As I was setting up class on Tuesday morning, chatting with the senior students, the door opened and two unfamiliar faces cooly entered the room and took seats at the table. They were followed by two more. And two more. I was bewildered as Bilbo by these surprise visitors, though they seemed to feel they were in exactly the right place at the right time. Turns out the seniors from each of our school’s two campuses were joining each other for the last week of classes—Senior Prank, Part One.

On Thursday morning, I drove into the schoolyard amidst all the dewey distilled freshness of morning sunrise, surveying the sunbeams across the treetops and the students venturing from the parking lot—and all our classroom tables, chairs, and whiteboards set up on the school lawn in precisely their ordinary indoor arrangements, the streaks of sunlight making them somehow seem glorious and exalted. All classes were held outside: Senior Prank, Part Two.

So pranks are on my mind, and I would like to offer an ode in their praise. For I must admit at once that I admire a good prank: not the bad ones intended to destroy or humiliate, but the good ones that merely delight and disrupt. So here is my apologia for pranks, in three points.

First is the simple matter of consistency. If I have laughed with my students at Odysseus’ antics in Polyphemus’ cave; if we have together read with delight the ridiculous wedding story of Petruchio and his shrew, Kate; if we’ve chuckled at Robin Hood’s shenanigans, or been in stitches at Huck Finn’s escapades all along the river—then mustn’t we laugh, too, when our students prove their skills in listening and imitation through pranks as well as through the more serious business of thinking, writing, character-building?

But, second, I wonder whether good pranks are really separate from the “serious” business to which we’ve set ourselves. A seriousness which excludes jollity is not solemnity, but dourness; C.S. Lewis observed that the deepest belly-laughs often come amidst the solemnest of discussions. And pure, unaffected, genuinely joyful laughter is among the rarer treasures of our age. Heirs of two world wars and guardians of weapons whose power we grimly guess, we are disillusioned cynics by default. An exhausted irony marks our era; our chief mode of humor is sarcasm. Sarcasm retains the sharp tone, but lacks the keen wit and moral earnestness of satire; it does not seek to improve, but to commentate. Morally checked out and intellectually lazy, it comes quickly and easily, whether in the middle-school classroom or the late night news analysis.

By contrast, a good prank is morally conscious and intellectually robust. It requires divergent thinking, planning ahead, weighing of consequences (all the things we strive to inculcate through essays and assignments), and, above all, a distinct disinterestedness, as it is done for the sake of pure jolliness, pure laughter—not to make a comment or have a last word. As such, it is an antidote to the ubiquity of sarcasm, and an exercise in happier humor—a human faculty that is under assault and that teachers ought to cultivate.

Lastly, good pranks belong to high comedy. And not only is comedy an escape shaft from post-modernity’s cave of anti-romance, but, Christians affirm, it is the final shape of the story of this world, which we must understand to live here well.

The classic literary definition of comedy is a U-shaped plot in which circumstances start auspiciously, take a turn for the worse, and are gradually restored to rights. But bundled with this plot pattern are all manner of comic conventions. A comedy, for example, boasts a wide array of character types—young lovers, jesters, boasters, tyrants, bumpkins, pedants, dandies, usurpers, accomplices, heroes, fools. Comedy, like Christianity, is inclusive: it brings all manner of people into the same story with the goal of reconciling as many as possible. Comic characters all have flaws; but, unlike the tragic flaws that trigger downfall, comic flaws exist to be ridiculed and then righted. Comic actions are not inevitable, but unpredictable: fairy queens fall in love with donkey-headed humans, the shrewish woman proves the happiest wife, the disguised shepherd is revealed as the lost true love. In this element of the unlooked-for, comedy brushes up against miracle.

And don’t pranks do this, too? A prank, like a miracle, is an interruption of the predictable order of things we have come to regard as inert laws of nature, when the laws of nature are in fact the pulsing energy of the divine sustaining of creation. Why do we so easily assume that the chairs will be in their appointed places in the classroom each day? Why do we assume the sun will rise? Orderly classrooms and wondrous sunrises are the gifts of patient janitors and a faithful Creator. Pranks and miracles do us the service of reminding us to give thanks for what we expect.

Of course, this involves inconvenience. A prank will disrupt your carefully-planned lesson. But this, too, can be a gift. Like pranks, miracles may be inconvenient—the lordship of Christ may be inconvenient. The disciples seem sometimes to be almost annoyed with the Lord, to remonstrate Him for playing with children and humoring the crowds; the Pharisees certainly are annoyed at His healings. Was it not a sort of high, holy prank to save the best wine for the end? To die and rise again? We of all people ought to live with the sense that the apparent order of things is ever subject to jolly interruptions; surprise is to be welcomed. In this we learn humility.

For in the end, a comic plot will come right because of our planning or despite it. As Shakespeare reminds us, the comic world is a moral one: though the balance may be thrown off in the middle, things come right in the end. Comedy is the mischievous Puck, who despite his troublemaking remains endearing and ends up being part of the final coming-rightness. Comedy is your students, who decorate your yard with toilet paper and turn your classrooms inside-out to make you laugh and to remember the superfluity, the gift-ness, the joy of your calling. Comedy is the Lord Christ, by whom death is dead and Resurrection—the greatest, jolliest, unpredictablest prank—is ever imminent.