Poem of the Week: The Shield of Achilles 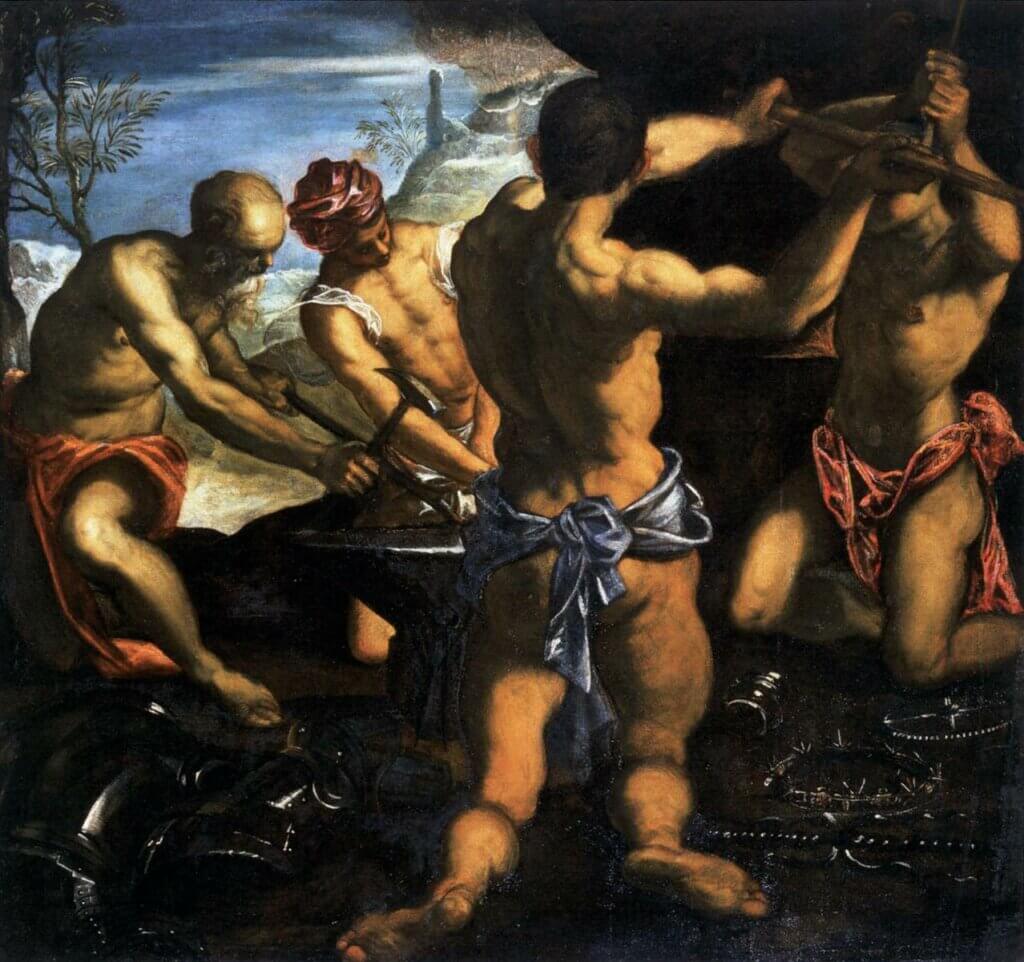 The Shield of Achilles
by WH Auden

She looked over his shoulder
For vines and olive trees,
Marble well-governed cities
And ships upon untamed seas,
But there on the shining metal
His hands had put instead
An artificial wilderness
And a sky like lead.

A plain without a feature, bare and brown,
No blade of grass, no sign of neighborhood,
Nothing to eat and nowhere to sit down,
Yet, congregated on its blankness, stood
An unintelligible multitude,
A million eyes, a million boots in line,
Without expression, waiting for a sign.

Out of the air a voice without a face
Proved by statistics that some cause was just
In tones as dry and level as the place:
No one was cheered and nothing was discussed;
Column by column in a cloud of dust
They marched away enduring a belief
Whose logic brought them, somewhere else, to grief.

She looked over his shoulder
For ritual pieties,
White flower-garlanded heifers,
Libation and sacrifice,
But there on the shining metal
Where the altar should have been,
She saw by his flickering forge-light
Quite another scene.

Barbed wire enclosed an arbitrary spot
Where bored officials lounged (one cracked a joke)
And sentries sweated for the day was hot:

A crowd of ordinary decent folk
Watched from without and neither moved nor spoke
As three pale figures were led forth and bound
To three posts driven upright in the ground.

The mass and majesty of this world, all
That carries weight and always weighs the same
Lay in the hands of others; they were small
And could not hope for help and no help came:
What their foes like to do was done, their shame
Was all the worst could wish; they lost their pride
And died as men before their bodies died.

She looked over his shoulder
For athletes at their games,
Men and women in a dance
Moving their sweet limbs
Quick, quick, to music,
But there on the shining shield
His hands had set no dancing-floor
But a weed-choked field.

A ragged urchin, aimless and alone,
Loitered about that vacancy; a bird
Flew up to safety from his well-aimed stone:
That girls are raped, that two boys knife a third,
Were axioms to him, who’d never heard
Of any world where promises were kept,
Or one could weep because another wept.

The thin-lipped armorer,
Hephaestos, hobbled away,
Thetis of the shining breasts
Cried out in dismay
At what the god had wrought
To please her son, the strong
Iron-hearted man-slaying Achilles
Who would not live long.

This is a tough poem; I must have read/experienced this poem a good 50 times before I began to really understand it. It has been generally interpreted as a commentary on the dangers of a totalitarian state–and this is a valid reading–but I think that this reading only scratches at the surface of what Auden was getting at.

In Homer’s Iliad, we are told of how Thetis goes to Hephaestos (the blacksmith of the gods) to ask him to craft glorious new armor for her son, Achilles. Hephaestos agrees, and Homer’s poem describes in detail the marvelous artistry and detail that the smith emblazons upon the glorious shield.

Auden takes this story and turns it on its head. In Auden’s poem, we see Thetis and Hephaestos (“She looked over his shoulder”) in the god’s forge after the armor has been crafted. Thetis examines the images on the shield, and the following stanzas are vivid descriptions of the pictures she finds there. These scenes are presented in a dreamlike fashion that causes us as readers to experience them something like Thetis herself would have been experiencing them. But of course the scenes that Auden imagines on the shield are nothing at all like the ones envisioned by Homer.

Thetis is repeatedly ‘dismayed’ at what she sees. She expects to see classical, traditional images of Beauty, but instead sees a vision of the Modern world, a disturbing world that Auden paints as becoming increasingly dehumanized. In essence, the poem is a description (or perhaps a warning) of the inevitable progression of a society that has adopted a philosophy of Nihilism. He is basically describing America.

“What does Nihilism mean?” wrote Friedrich Nietszche. “–That the highest values are losing their value. There is no goal…There is no Truth, no ‘thing in itself.’ There is no answer to the question: ‘why?'”

The first picture of the Modern world that we see in Auden’s poem are masses of people gathered together in a dreary suburban wilderness, “waiting for a sign”–waiting for some proof of the divine–as if proof were some prerequisite for faith. Instead, “out of the air a voice without a face proved by statistics that some cause was just.” The image here is vague and haunting: it suggests some dis-embodied voice–the ‘spirit of the age,’ perhaps, or maybe a television screen–attempting to justify its verity by reliance on facts, information, and data rather than appealing to any pre-existing absolute notion of ‘justice.’ Thetis watches this depressing image of humanity being led like sheep to the slaughter under the dry, comfortless assurance that those in control had absolute certainty in the scientific perfection of their cause. The old traditions have been destroyed; we elite few know the best way to shape humanity. Anyone who has been educated in the humanities at a secular university should understand precisely what these lines are getting at. It has many names–Materialism, Positivism, Scientism–but traced back to its root it is essentially one form of Nihilism.

For the sake of brevity, the second vision that Thetis sees on the shield is essentially humanity’s loss of hope. The three prisoners that are executed, we are told, “could not hope for help”–they did not possess the ability to look to anything higher than themselves to save them. And this inability to have hope in the face of death causes them to “die as men before their bodies died.” The humans pictured in this scene are essentially zombies–animated corpses that have long since been vacated by anything resembling a true Human. This is the fruit of the “belief” followed by humanity in the preceding scenes–the fruit of Nihilism. If there is no truth, then there can certainly be no true hope. If there is no truth, death conquers all.

The last vision that Thetis sees on the shield shows the inevitable destination of the society that has abandoned a belief in Truth. We see a lone child, throwing a rock at a bird. But what is incredible about this child, we learn, is that horror and sin are ‘axioms’ to him–they are basic, common truths. He is not bothered by the fact that “girls are raped,” or that “two boys [would] knife a third,” precisely because he has “never heard of any world where promises were kept” or that “one could weep because another wept.” The child produced by Nihilism is so thoroughly steeped in relativism that it is impossible for him to even imagine a world not ruled by lies and hatred.

Auden could see the direction the Modern world was going, and this poem articulates the vision of one who sees all too clearly the intellectual deception that was so prevalent even during his time. He saw the old traditions being abandoned for new, ‘modern’ ideas–and he foresaw to some degree the consequences that would follow. In Amusing Ourselves to Death, Postman cites a study done in the early 1900’s of the biggest problems in schools, and the top ten included things like chewing gum, tardiness, and speaking out of turn in class. The same study done in the 80’s: rape, gang violence, drugs, etc. “That girls are raped, that two boys knife a third, Were axioms to him, who’d never heard Of any world where promises were kept, Or one could weep because another wept.”

The problem with denying the existence of absolute truth, as Nihilism does, is that you are always forced to submit to some absolute truth–a substitute. You may say that there is no truth, but you cannot even help expressing a claim to truth in doing so. Those who look to science for truth are inherently relying on absolute scientific principles–without which they could have no knowledge whatsoever. This fundamental logical contradiction is precisely what we see in Auden’s poem: the masses of people walk down a path “enduring a belief whose logic brought them, somewhere else, to grief.”

Lest we walk away from this poem feeling unduly proud of ourselves, we should remember that we have all been influenced to varying degrees by the spirit of this age. If anything, this poem should cause us to grieve, and repent. There is a story that, when responding to the question “What is wrong with the world?” G.K. Chesterton responded simply, “I am.”