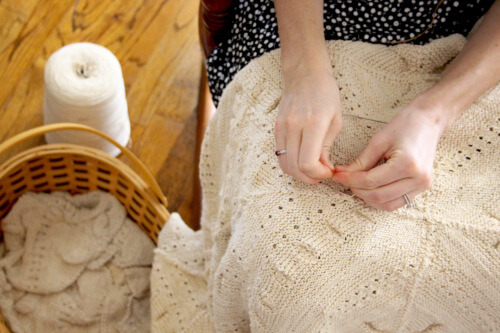 To recreate is a harder task than to create.

The weight of that theological declaration settled on me over the past few weeks, as my nine-months-pregnant frame contorted in all manner of calisthenics while refinishing the crib in which my mother laid me when I was tiny. It was part frugality, part commitment to reusing, and part whimsy to share my own history with my baby which led to the dragging of the dismembered crib down from the attic for repairing, sanding, painting, and sealing; the same motives also inspired the yellow seersucker crib set I stitched myself, and the wooden rocking stand my husband crafted for baby’s bassinet.

But in all these projects, one motive was consistently frustrated. Contrary to what they say, recycling and do-it-yourselfing are not necessarily frugal—not, at least, in the sense of saving money, nor labor nor time. Matter may be conserved, but not energy, and not most other resources either. So when my sister-in-law texted me the picture of the sweet Jenny Lind crib she got on sale for her baby for $100, I wondered: is it worth it?

The thing is, we do not really get a choice—not in life’s most important acts of making—as to whether we shall create ex nihilo, or recreate from wounded fragments.

Think, for instance, of one of the most significant acts of making: the shaping of souls through education. Classical educators are well aware that their pedagogy is something dragged down from the attic to be refurbished and reused, but so also are our students. As John Milton states in a foundational text of classical Christian education, his essay “On Education,” “the end then of Learning is to repair the ruines of our first Parents by regaining to know God aright, and out of that knowledge to love him, to imitate him, to be like him, as we may the neerest by possessing our souls of true vertue, which being united to the heavenly grace of faith makes up the highest perfection.” For Milton, all learners (including both students and teachers) are “ruined,” and the work of education is reparative. The act of making from which all other creative acts flow, the shaping of souls, is itself an act of re-creation.

But so also are friendships, marriages, conversions, all of which forge something fresh from the shards of sin-bent human souls. Indeed, the most meaning-fraught makings of our lives so often seem to recapitulate the grand Story of which our lives are subplots, the main theme played out in infinite variations, in which we’re planted in the midst of a groaning creation and propelled towards the time when it shall all be made new. Perhaps they are meaningful because they are echoes of their source, that tale of felix culpa—a “fortunate fall” in which, as the theologians say, we come to learn that “what we have gained in Christ is greater than what we had lost in Adam,” and the recreation proves more glorious than the original creation.

Of course, the greater glory comes at greater cost. Our gain in Christ is greater than our loss in Adam—but the price our Lord paid infinitely outweighs the original obedience Adam owed. Recreation is more glorious because it is more costly, more costly because it is more glorious. A beautiful image of this can be found in the Japanese art form of kintsugi, a method of mending broken pottery. Rather than tossing the fragments away, or repairing them in the cheapest way for the most basic household uses, pottery shards are refused using lacquer mixed with precious metals. The result is a lovely mosaic of plain pottery laced with shimmering gold, far lovelier and more valuable than the original dish that was shattered. The art form calls to mind a more profound picture of recreation’s simultaneous value and cost: the resurrected, wounded hands of Christ, broken flesh bearing golden scars.

When, then, I ask myself whether it is “worth it” to take on reclamation projects that end up costing more time and money and effort than buying new—whether, as Wendell Berry’s “Mad Farmer Liberation Front” has it, it is worthwhile to “practice resurrection”—I say that it is, because every small imitation of the grand narrative prepares my soul for fuller participation in it. Refurbishing a crib trains not only my hands, but also my soul, in the virtues needful for restoring broken friendships or “repairing the ruins” in the classroom or repenting from sin, all of which in turn set my sights on seeking redemption through all spheres of life.

To restore old objects rather than buying new; to reunite discarded fragments into fresh being; to repair, renew, recycle, redeem, recreate—do not be fooled into thinking this calling saves time, labor, or money. It demands far more of every commodity than do fresh starts or Ikea remodels. But, practiced in the church, the home, the school, the place of business, it offers a prize far more profound: participation in the grand narrative of felix culpa, which itself re-spins the same story of resurrection again and again.

The header photo pictures a knitted afghan which my great-grandmother began and I am finishing; the thread is actually butcher’s twine, which, my grandmother told me, housewives used to save and remake into projects such as this.