The One TV Show Your Classroom Needs 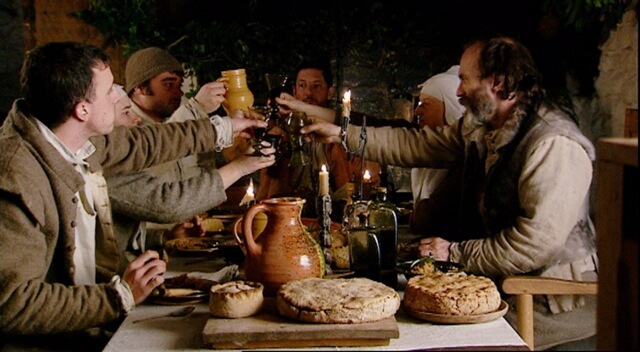 Tales From The Green Valley is a BBC2 documentary series which immerses five historians in a Stuart era farm for an entire year. All of the tools, food, and clothing of the time are used for farming, and the historians conduct their work in a house which dates back over four hundred years. The program contains twelve episodes, and each hour-long episode documents the events of an entire month of the year.

While it might seem like a reach, I can imagine the show being useful for any grade level and nearly any class. Lately, I have shown episodes to my Medieval history students and my early modern European students. The program has been useful for the following discussions.

1. Everything comes from somewhere. Why does this natural object symbolize that abstract concept? Where do last names come from? Where do nursery rhymes come from? Everything comes from somewhere, and most things come from farms. So many American last names are simply the names of farming tools or jobs: Coulter, Smith, Miller, Reeve, Woods, Thatcher… the list is endless. While a student may know the origin and etymology of their own last name, it is fascinating (after watching a few episodes) to go around the room and recognize that a good half of the students present have last names born out of agriculture. Students not only see their own family lines situated within a certain tradition, but the lion’s share of their society situated in a tradition.

2. The spell of modernity is broken, even if only for a moment. Every history teacher has fielded the following, heartbreaking question from a student at some point: What did people do 500 years ago? So much of our own lives revolve around technology which is no more than a decade old, when we begin imagining all of our newly arisen conveniences away, the world seems a bafflingly empty place. However, when a citizen of modernity bears witness to agrarian life of yesteryear, our own lives seem hopelessly impoverished by comparison. While few Medieval or early modern farmers could read, they knew how to do a hundred things which would leave us all thumbs. The agrarian life is repetitive, but endlessly various, as well. The month (and sometimes even the week) dictates the day’s activities, and all the activities involve minute, tactile orchestrations of nature.

3. Modern life is thrown into high relief. Students watch the historians thatch a roof, heat an oven to bake bread. The historians comment on what they are doing as they do it. “Right now, I am marking the wet dough of this bread with the letter R, for “Reeve,” which is my last name. All the loaves of bread went into a communal oven, and so women had to mark their bread by name so they could get their own loaves out. This is the origin of the nursery rhyme, “…roll it and pat it and mark it with a B and put it in the oven….” Another historian mends fishing nets, and we watch as he explains how to tie knots and cinch together holes. I ask studenst:

Imagine historians from the year 2400 AD making documentaries about life in the early 21st century. Imagine recreating an entire day in the life of an early 21st century man. What would the historian say about most people’s day to day lives? Would the historian sit down in a chair and say, “The typical 21st century man sat in front of a computer for many, many hours a day. Sometimes he checked his mail, which was also on the computer. Sometimes he paid his bills on the computer. He looked at pictures of celebrities who took pictures of themselves. On his way home on the train, he had a little computer in his pocket so he could keep looking at celebrities…

Students are able to think of their lives, for a moment, from a great distance. They laugh, and then look sober as everything which is normal becomes alien.