Reflecting on Dead's Poet's Society, The Picture of Dorian Gray, and Liberation 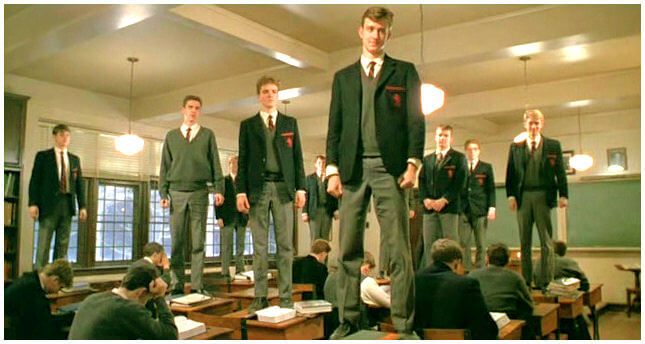 Last night I watched The Dead Poets Society, and I thought about how every teacher longs to have his John Keating moments. These abound in this story of an unorthodox English teacher’s misadventures at a stodgy 1959 boys’ school: whistling his way around (or on top of) desks and administrators, physically spinning metaphors out of the quietest students, igniting in grade-obsessed high-schoolers a love for poetry that sends them out of their beds at night, and lining them up to whack at a ball while yawping grand dictums to Beethoven’s swelling brass.

But it’s not just the theatrics; it’s the burning words he brands upon their beings: “No matter what anybody tells you, words and ideas can change the world.” “Make your lives extraordinary.” “This is a battle, a war, and the casualties could be your hearts and souls.”

Mr. Keating does not exactly teach English (“We covered the Romantics and some of the chapters on Post Civil War literature,” testifies a student near the film’s end). His career predictably ends in disgraceful expulsion. But he masterfully goads the boys towards the great goal of learning: liberation.

Liberation has been education’s chief end ever since Plato’s allegory of the cave became its enduring image. That humans are born in bondage, that we are enslaved and enslave ourselves to unreality and ignorance, is the reason we need teachers; that humans can be delivered—can be dragged, kicking and screaming, from the puppet-show of the shadows to the glorious air and light of the world above—is the reason we attempt to teach. The arts are liberal because they liberate.

And Mr. Keating gets this. He vividly impresses his students with life’s weightiness and brevity, galvanizing them to crusade against conformity, to think their own thoughts, and to “suck the marrow from life.”

However, the tragic applications that some of Mr. Keating’s students make of his words, culminating in one student’s suicide, fiercely undercut the goodness of a “liberated” life.

Indeed, as I watched the film, I was eerily reminded of another bleak portrait of liberation: Oscar Wilde’s The Picture of Dorian Gray. Early in that novel, Lord Henry Wotton proclaims, “The aim of life is self-development. To realize one’s nature perfectly—that is what each of us is here for. People are afraid of themselves, nowadays. They have forgotten the highest of all duties, the duty that one owes to oneself.”

Right along with Mr. Keating, Lord Henry warns of the danger of conventions that dull the soul, urging Dorian that “if one man were to live out his life fully and completely, were to give form to every feeling, expression to every thought, reality to every dream—I believe that the world would gain such a fresh impulse of joy” as would waken and transform it.

But, like some of Mr. Keating’s students, Lord Henry (who is in fact the novel’s tempter figure) carries this concept of liberation to its logical conclusion of libertinism: “But the bravest man among us is afraid of himself. . . . We are punished for our refusals. . . . The only way to get rid of a temptation is to yield to it.” Dorian Gray makes Lord Henry’s pronouncement his life’s practice, but in place of “a fresh impulse of joy” gains a burden of guilt, a disfigured soul, and a knife in the heart.

If anything, liberation seems to be the end, not of education, but of innocence.

Plato, if we read him more carefully, suggests not: we escape the cave, not for the sake of the escape, but in order to gaze upon the sun (and then, paradoxically, to return to the cave to drag others out.) The escape does little good until, having gotten our eyes accustomed to the light of knowledge, we may behold “the idea of the good,” “the cause of all that is right and fair in everything.” We may treasure liberation as a great good, but not good in itself—rather, good for what it brings.

What this means is that liberation is never simply “from.” Always, implicitly or explicitly, it is also “towards.” And this realization must profoundly shape our teaching.

For the truth is, “Mr. Keating moments” are actually not that difficult. There’s a glory and grandeur in declaiming the breaking of chains, the opening of eyes, the fist in the face of society. Our own society has been glutted on such talk; fed beyond tasting, we continue to chew and swallow the gristly cant of “women’s liberation,” “sexual liberation,” and liberation from any other traditional mores.

Some of these movements responded to genuine instances of bondage needing to be loosed. But all focused so exclusively on “liberation” that the actual goals of the freedoms, once attained, eluded us. Liberation awakened our longing for self-transcendence—as T.S. Eliot would put it in “Little Gidding,” “Not less of love but expanding / Of love beyond desire, and so liberation / From the future as well as the past”—but our liberators had nothing to offer.

In the absence of transcendence, we sought significance in sensual fulfillment. And with the assurance of having been liberated, but without a goal to carry us beyond ourselves, we now feel more tightly bound than ever in the narrow cave of our own self-love. Neil’s and Dorian’s suicides, along with the rising suicide rates of our own day, perfectly symbolize the last possible avenue of escape from self.

So we cannot stop at liberation.

Besides waking students from sleep, we must offer a reason to wake; besides pulling them from the cave, we must point them towards the sun.

For freedom Christ has set us free. Do not use your freedom as an opportunity for the flesh, but through love serve one another. If the Son makes you free, you shall be free indeed. Sin shall not have dominion over you. Having been set free from sin, you have become slaves of God. You have your fruit to holiness, and the end, everlasting life. For the wages of sin is death, but the gift of God is eternal life in Christ Jesus our Lord.

These are the moments we strive for, this the great truth to trumpet in all our teaching. It is a harder message to proclaim than that of simple liberation. But the high-hearted challenge is the more worth taking.