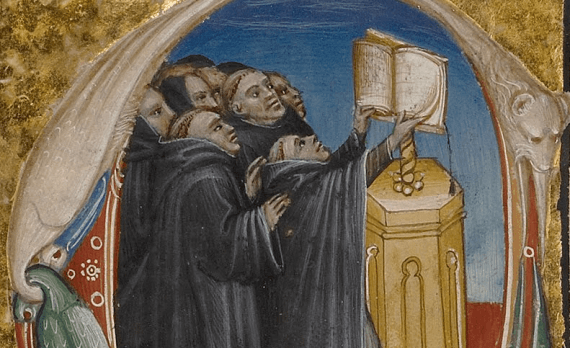 Last April, I took a class of Medieval literature students to the Cloisters in New York and watched with great chagrin as a docent asked the class for the years of the Medieval era and they all fell silent. I was (and still am) quite proud of the achievements of that class in Medieval study, though when I saw them scrambling for such an obvious fact, I began questioning whether I had really taught them properly. I expect my students to forget the dates of the Medieval era when they are ten years beyond graduation, and neither am I too concerned about this, but during the course of the year? I decided I needed to change something.

For the upcoming school year, I have implemented several changes to my Medieval literature class in order to make it more Medieval in method, not merely in principle. These are ideas that have been slowly forming in my head for years, and I suspect I have borrowed them from others who I wish I could now credit, though I don’t remember their names. I would describe my teaching style as pastoral, confessional, ministerial, classical, though I don’t know that my Medieval class has been particularly Medieval apart from content. Here are some ways I am trying to change this:

1. All written work will be saved. No Medieval man would have written something down and later thrown it away. Vellum was simply too expensive for that. Disposable ideas for disposable texts; saved ideas for saved texts. This year, all test and quiz and essay work will be finished in a notebook that will be turned in. Students will have a record of their work always at their finger tips, as well as the grades their work has warranted. It is my hope that treating the physical substance of words more preciously will help students treat the ideas behind those words more preciously, as well. The covers of these notebooks can be decorated with crosses, but that is all. Also, I will lose student work less frequently.

2. Memorize for life, or don’t bother. After ten years of teaching, I have tired of asking students to memorize facts, stats, dates, quotes, and lists which I cannot hope they will retain later. This year, I have written catechisms for my classes which will be recited in full every day at the start of class. The Medieval catechism contains a list of the virtues, the fruits of the Spirit, the spheres, the humors, the temperaments, the high feast days of the Church calendar and their dates, the apostles, the tribes of Israel. The catechism also includes the Nicene Creed and a brief chronology of sixteen key dates in Late Antiquity and the Middle Ages (Edict of Milan, papacy of Gregory, crowning of Charlemagne, and so forth). I would like to show the students how to recite the catechism for the first two weeks, then give this or that student the responsibility of leading it for a week. The entire catechism will take around four or five minutes to cycle through. The catechism will be copied out entirely by hand into the notebook. The catechism will contain the entire year in microcosm. We will slowly work through every aspect of it, but the entire catechism will be received in full at the beginning of the year. By the end of the year, students will have recited the catechism several hundred times. Not only will this repetition lead to greater retention, the information will have come in a ritualized and ceremonial manner. In the past, the piecemeal fashion in which memorized information is assigned has led to poor retention, but so has the rather arbitrary assignment dates and testing dates. The real coup here, if I can swing it, will be getting students to memorize a massive amount of information which will not ultimately be tested and graded. If the students have the entire catechism memorized by the middle of the year, I can ask them to say it during long fire drills or various downtimes which otherwise devolve into time for gossip and flirtation.

3. The classroom rule will be memorialized. I have a code of classroom decorum which I have written myself, and which I am very proud of. However, I get poor usage of it because I cover it with students during the second week of class and then they never see it again. This year, all twenty rules of decorum will be copied into the student notebooks and read aloud once a month. I would like to treat the rules of decorum as a substantial thing to be learned like unto the curriculum, the lectures and the discussions which constitute the class.

4. The class begins with order, contemplation. I have been uneven in the last several years at getting class to start properly. Students are required to enter class silently, and I have tried to put a question on the board which they are to write on for a few minutes. However, this practice often begins well, but proves unsustainable over the year because I can’t always think of a compelling question for the board, or because I’m rushing to print something between classes and never get anything scrawled on the board. However, beginning each day with the catechism seems a more sustainable (self-sustaining) practice. I have heard upper school teachers and admin bemoan (off and on) that once students hit seventh grade, so many of the classical aspects of memorization are suddenly abandoned, for high school teachers do not use chants, mnemonics and so forth. There are ways in which fifth grade Latin is the most classical of classes: the uniformity of purpose engendered by uniformity of voice and posture is an aspect of character formation I want to recapture in the high school years.

5. Homework for fasting. This year, I will assign homework on Tuesday and Thursday nights (as is appropriate for Wednesday and Friday fasts), as well as all other fasting days of the Church calendar. As a general rule, homework will not be given on evenings when fasting is not required.