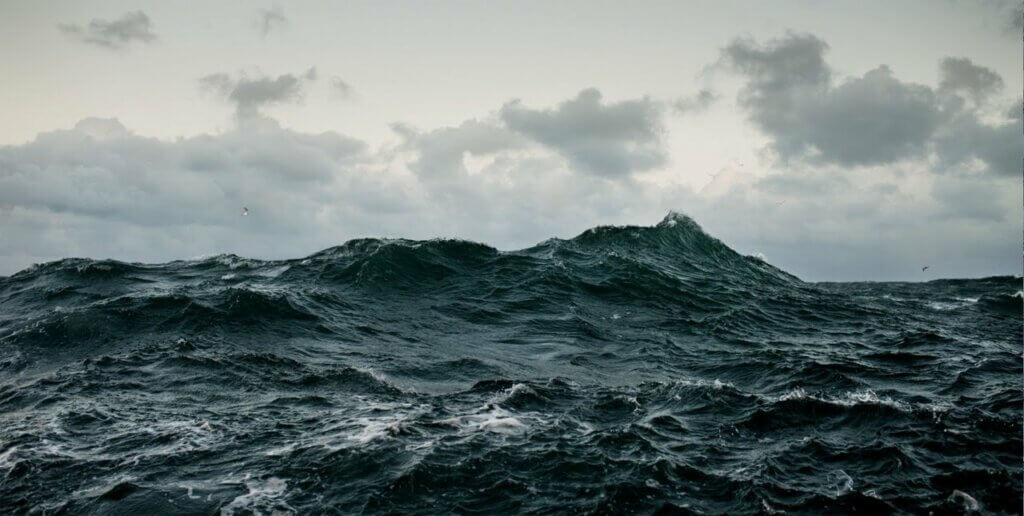 Sailing occupied a far different place in the ancient imagination than it does ours. While sailing and shipping were necessary and sometimes lucrative, sailing was as dangerous and grueling in Christ’s time as mining is in our own age. No one wanted to sail. In the Works & Days, Hesiod warns Perseus to resist the call of the sea, describing the sea-faring life as a terror. The Odyssey confirms Hesiod’s suspicions, revealing the God of the Sea, Poseidon, as the great and capricious enemy of the poem’s hero. Over a thousand years before Christ, the Jews imagined the Sea as a chaotic place, unpredictable and violent. The Old Testament commonly uses the sea as an image of pagan nations, while the mountain was the great icon of Israel. Sheol is more often described as a dark depth, a watery grave. It is no coincidence that Christ describes Hell as lake of fire and not a mountain of fire. Against the chaos of the ocean, Christians took shelter to worship God in the nave of the Church, or the ship of the Church. While the Church is in the world, she is not of the world; the Church is a place of deliverance in times of trouble, an ark floating over the watery chaos and uncertainty of the City of Man.

That the seafaring life is the Christian life, or at least so the metaphor commonly runs, ought to give us pause on how safe we expect the Christian life to be. In Mark’s Gospel, shortly after Jesus curses a fruitless fig tree, He closes down the temple. A day later, Peter sees the same fig tree withered from the root up and becomes terrified. Peter is clever enough to know the import of the sign. The temple is also withered from the root up. While the Jews had waited hundreds of years to see the temple rebuilt, it would soon be no different than tree before them. The notion is vertigo inducing to Peter who seems to shout at Christ in order to gain His attention. “Rabbi, look! The fig tree you cursed is withered from the root up.”

Jesus answers, “Have faith in God. Truly I tell you, if anyone says to this mountain, ‘Go, throw yourself into the sea,’ and does not doubt in their heart but believes that what they say will happen, it will be done for them.” The mountain Jesus refers to is likely the mountain on which the temple was built, which loomed before them as they walked from Bethany back into Jerusalem. The mountain of Jerusalem would shortly be pitched into the sea of the nations, that the temple might truly be a “house of prayer for all nations,” as Isaiah prophesied, a passage which Jesus invoked only a day earlier while closing down the temple. While the cursing of the fig tree is described in Matthew and Mark, only Mark’s Gospel contains Peter’s concern and question of the Lord. However, Mark omits the story of Peter’s walk on the water to meet Christ, though Matthew includes it.

It seems that Mark’s inclusion of Peter’s concern for the fig tree and Christ’s comment on casting mountains into the sea are allusions to the missing water-walking story in his Gospel. Not only will the mountain be cast into the sea, but everyone on the mountain, and in so doing, the sea will be saved and tamed, just as Christ prophesied in His calming of the storm. In some sense, I suppose, it is actually the sea which is sinking into St. Peter.

While the western world is arguably Christianized (I use the term loosely), yet we all live in the midst of the same chaotic sea which threatened the Israelites, Peter, and Paul— a world characterized by a love of the inane, the violent, the sensual, the mindless, the frenzied and berserk. Christians have a paradoxical relationship with the world. While we have always understood the things of God to be a “hiding place” and “refuge” from the terror of the world (our Christ the one who wants to gather us under His wing to shelter us), at the same time, St John teaches in Revelation 21 that the gates of the New Jerusalem shall never be shut. When Habakuk prophesies that ”the earth will be filled with the knowledge of the glory of the LORD, as the waters cover the sea,” he speaks of a time when the love of God will supplant the sea.

The trial is not yet over, though, and the ship of the Church has not yet come to rest on the crest of the mountain, and the water is not finally drained away. The dove which Noah finally sent forth from the ark never returned, and so the Holy Ghost moves men about the earth where He pleases, and we cannot tell where we are coming from or where we are going. The seafaring life is uncertain in human terms, carnal terms, and yet we do not ultimately rely on the certainty of knowledge, but on faith and hope and love.