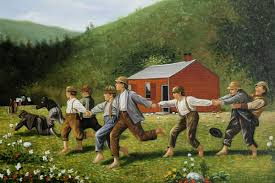 Witty and perceptive she may be, but clearly, Scout Finch is not strong on compassion. Within the first three chapters of To Kill A Mockingbird, she shames Dill, slanders Boo Radley, mortifies Miss Caroline, beats up and then dresses down Walter Cunningham, and sprinkles in some rather harsh commentary on a cast of other Maycomb characters: Calpurnia “was all angles and bones; she was nearsighted; she squinted; her hand was wide as a bed slat and twice as hard”; Miss Stephanie Crawford was “a neighborhood scold”; Mrs. Henry Lafayette Dubose “was plain hell.”

Readers, including myself and my ninth-grade students, may be so swept up in enjoyment of this beautifully-told story that they do not notice—or, if they do, excuse—Scout’s lack of compassion. Yet compassion, or its lack, will prove the driving force of the story’s plot: each choice of every character reveals a crisis of compassion, from the squabbles in Scout’s backyard to the culminating clash in the courtroom. Ever-so-subtly, Harper Lee sprinkles into the story’s opening chapters and into Scout’s lovable persona the plot’s propelling conflict.

But the conflicts of the early chapters will be magnified in the later, the flaws of the child become the vices of the adult. It is one thing to mock Walter for his lack of lunch; it is the same thing, grown-up-style, to accuse Tom Robinson of vile crime.

While the seeds of conflict are sown in these opening chapters, Lee also plants the beginnings of resolution right alongside, softly spoken into a child’s instruction by the same voice that will declare it forensically in the courtroom. At the end of Scout’s ill-fated first day of school, as she and Atticus talk through all its events, her father tells her:

“If you can learn a simple trick, Scout, you’ll get along a lot better with all kinds of folks. You never really understand a person until you consider things from his point of view—”
“Sir?”
“—until you climb into his skin and walk around in it.”

“Climb into his skin and walk around in it”: so Atticus defines compassion, the ability to understand and feel along with people, and as a result to “get along better” with them by treating them with justice, kindness, generosity. It is Miss Maudie baking poundcake for Scout, Jem, and Dill; Atticus respecting Mrs. Henry Lafayette Dubose; Tom Robinson chopping wood for Mayella Ewell. And this climbing into someone else’s skin, this foundation of compassion, is an act of imagination.

It’s also an act that Scout does all the time. Ironically, though she lacks compassion, Scout climbs into other people’s skin with ease—during her play. She and Jem and Dill while away their whole summers together by acting out their “list of dramas based on the works of Oliver Optic, Victor Appleton, and Edgar Rice Burroughs”; and when they tire of these, of course, there’s the drama of Boo Radley to dream up. Like any child, games of pretend and make-believe are the heartbeat of their play. Indeed, when I asked my ninth-graders whether they played make-believe as children, their eyes lit up, and you should’ve heard the delight with which they each described their own versions of playing house or Robin Hood or superheroes or Little House on the Prairie.

Of course, by the advanced age of ninth grade, playing pretend in this way is no longer possible. My students and I remembered and lamented together the moment when “playing house” suddenly felt fake (and many could remember a distinct moment at which this occurred). Something changes, all of a sudden, as we grow up; we might feel as though we’ve outgrown our imaginations.

But, truly, maturity does not mean leaving the imagination behind, but carrying it forward from the world of play into the world of neighbors. From imagining ourselves into Little John’s or Laura Ingalls’s shoes, we learn to imagine ourselves into Tom Robinson’s and Mayella Ewell’s. To Kill A Mockingbird, Scout’s growing-up story, charts her maturation as the growth in her ability to imaginatively understand those around her—and therefore, to act towards them compassionately.

We can see her progress at the novel’s end, which chiastically echoes its beginning. Jem, Scout, and Dill are together again, but using their imaginations not in the yard but in the courthouse, listening to Atticus’s defense of Tom Robinson. Atticus is still trying to get people to step into one another’s shoes, as Scout observes: “Slowly but surely I began to see the pattern of Atticus’s questions: from questions that Mr. Gilmer did not deem sufficiently irrelevant or immaterial to object to, Atticus was quietly building up before the jury a picture of the Ewells’ home life.” Later, Atticus asks Tom himself some similarly seemingly irrelevant questions, at which “Dill leaned across me and asked Jem what Atticus was doing. Jem said Atticus was showing the jury that Tom had nothing to hide.”

In the test of imagination and compassion that the case presents, the jury, and Maycomb, fail. But Jem, Scout, and Dill, by their attentive following of the case and interpretation of its results, prove that their youthful imaginations have matured. They, unlike most of Maycomb’s residents, are able to step inside the shoes of prosecutors and defendant, and to judge both with compassion.

Reading the story along these lines can reveal a significance in its many episodes that’s easy to miss; the double theme of imagination and compassion uncovers a layer of literary craftsmanship running through the whole novel. It also has stirred up other connections and applications as I’ve read. For starters, connecting compassion with imagination, as nurtured through childhood pretending, builds a powerful argument for play-as-learning (a topic beloved of many classical and Charlotte Mason educators).

It’s also a potent demonstration of a danger inherent to pragmatic, efficiency-driven societies such as ours. Where efficiency rules, the narrative imagination is often dismissed as unproductive. Math and science, torn from their metanarrative and presented as “subjects,” dominate school programs and standardized tests, while the adult world of careers and responsibilities neglects the making of and participation in stories. But if compassion needs imagination, then would we not expect to see compassion suffering in such a setting? And is that not what we do see?

If we desire to see more compassion in the world—and in ourselves—then perhaps imagination is the place to start. End school early so the kids can play pretend. Read aloud together at night. Ask your neighbors, next door and otherwise, where they’ve come from and who they hope to be. Get to know them. Step into their shoes.