Harkness Cautions: You Need A Sage On A Stage 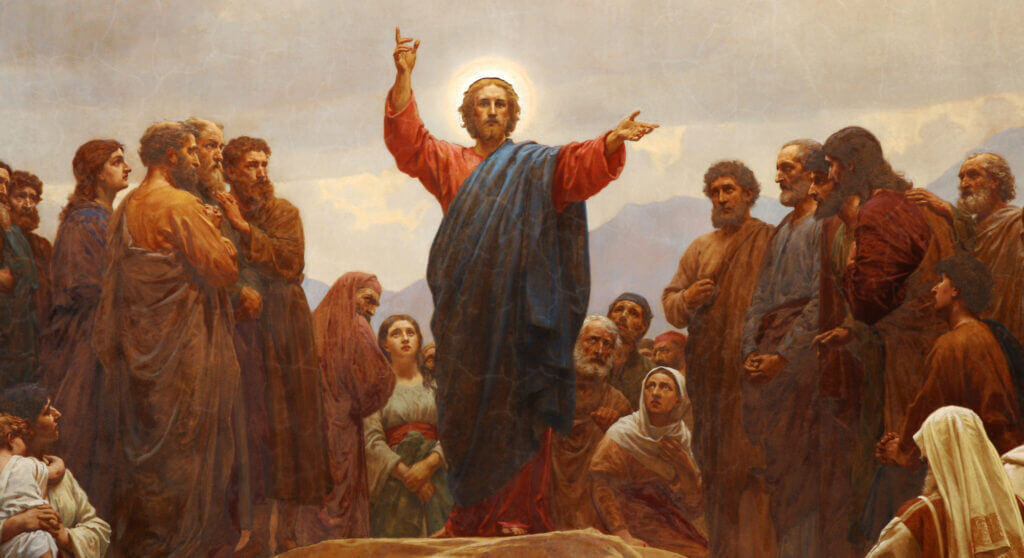 For three years, I used a Harkness table to teach great books, but when I was lately given the option of returning to the use of conventional desks, I took it. The Harkness table I used previously was beautiful, stately, the kind of furniture you might see in the White House. More than a little awe possesses the heart of man entering a room filled with a table that seats twenty, and I would readily admit such awe is absent when approaching a one-seat desk with unsteady legs and a plastic gloss. Obviously, I do not dislike Harkness tables and my preference for conventional desks might simply be a matter of taste and ability. I simply never had much luck with a Harkness table.

This might have something to do with the fact that I teach high school students, not adults. Adults are far better suited to deal with the myriad distractions which come from being oriented toward ten other people, as opposed to one. For my money, though, the Harkness table brought a host of disturbances and interruptions which are far less common when all the students are oriented toward a single figure at the front of the classroom. Students made eyes at one another, mouthed little conversations to one another, flirted with each other, and studied the six dozen pencil pouches and other gear (why everyone must have a water bottle these days is beyond my reckoning— were children of my generation dying of dehydration in math class and I simply never heard about it?) which filled the table. I found myself constantly working around the additional distractions the table created, and neither did I find conversation richer around the table than inside a classroom wherein all were oriented to the front.

Speaking of “the sage on the stage” in dismissive tones has become de rigueur, even, strangely enough, among classical educators. A great many of us now expect the teacher to be more of a guide, a midwife, a docent, or someone who “gets out of the way to let learning take place.” Socratic discussion is a method of inquiry wherein students learn how to question, how to investigate, how to probe and scrutinize, and the teacher is one who instructs and inspires a lifelong spirit of inquiry. The attention of the class does not fall on the teacher, but on the wonders of an inquisitive spirit, and the good class does not end with any determination being made or credo being pronounced, but on the students reaching an even more difficult and precise question than yesterday, and the teacher closing the hour off with, “Well, these are tough questions everyone, but we’ll be back again tomorrow to keep sorting them out.”

To be quite frank, though, everything that I just described is— if left alone— quite banal and cannot fail to ultimately frustrate students and inspire cynicism and skepticism.

A good teacher is not trying to inspire a lifelong spirit of inquiry. A good teacher is revealing Truth, and helping students to settle finally on the Truth. If a teacher is opening minds, he ought to be closing them on the life of God and morality and virtue, not leaving them endlessly dangling like broken jaws. The good teacher does not merely help students investigate the meaning of virtue, he commands them to be virtuous, explains virtue with clarity, and models virtue for them in his texts and his own life. As a friend recently pointed out to me (in reference to John Senior’s The Restoration of Christian Culture), Dante’s Limbo is filled with pagan philosophers who spend eternity in endless conversation, endless dialogue, but never satisfied or filled with the Truth. The Paradise, on the other hand, is a place of praise, not idle prattle.

The good teacher lays out a model for students, and he cannot do this if he is physically postured like a student. A teacher should stand to teach so he is easily visible, and he should pace around the room like a sheepdog so he can corral the hearts of his students. The difficulty with a Harkness table is that the teacher does not stand in a place of prominence, does not occupy a seat of authority, and so he is more difficult to see and more difficult to respect. Students do not want a teacher who is like them, rather, students want to become like their teacher— if their teacher is a lovely and charismatic person. Such charisma commands love. No one loves method. Method does not quicken the heart. We have had all the uneasy feeling, perhaps during a sales pitch or presentation, that someone was applying a method they learned to us, and we have all felt a little queasy over it. Method does not model anything. There is nothing to model in method but method itself, and methods are dull. Human beings who are on fire, swept away by the grandeur of God’s beauty, rhapsodizing and sermonizing on the desperate need for virtue— such human beings inspire love and devotion. The teacher who consistently employs an effective method, day in and day out, should not expect anyone to weep during class, least of all himself. How do you want your students to love Beauty? Show it to them. There is no method for showing it. There is only modeling it. No one ever asks a teacher, “So, when you were younger, what method made you want to become a teacher?” We say, “What teacher made you want to be a teacher?” and then hear a story of some lively weirdo from whose mouth fireworks and gold poured forth.

What is more, there is something a little embarrassing about explaining the method which you are using on another person to that person. For the teacher who models a love of the truth, though, explaining the game plan to students is no cause for shame. “I love Burke. I want you to love Burke. Read Burke the way I read Burke,” and I don’t read Burke so I can endlessly inquire into the nature of government. I believe Burke so I can live my life with wisdom and common sense. Burke is right. He can help you. Let us attend to Burke. The teacher should model himself after Christ, Who had a habit of entering the interesting and endless debates of His day and shutting them down. During Holy Week, when Christ is accosted by the great intellectuals of His day in Jerusalem, one gets the sense that the Pharisees and Sadducees are bringing to the Rabbi all the great and interminable discussions of their day in an attempt to “draw Him into the conversation.” Christ refuses to play the Limbo game, though. When Christ speaks, “the crowds were amazed at His teaching, because he taught as one who had authority, and not as their teachers of the law,” who preferred endless, circular inquiry which perpetually justified their own presence as hapless moderators. Every teacher— every teacher— should aim to dismiss his classes at the end of the hour “amazed” over this same spirit of authority, not inquiry. When your students come to you and say, “I have been wondering lately about the music I listen to. I listen to some really lurid music, there’s lots of profanity, lots of vulgarity and sex in it, but I think I can handle it. Do you think it’s okay to listen to it?” what they do not want to hear is, “Well, that’s a very interesting question. We all have certain—” They want to hear, “No, of course it’s not okay,” because there are very few human beings left in the world who are willing to give a straight answer to such a question. Adults are always driveling on and on about “wisdom issues” and “tough calls.” If a teacher finds a student humble enough to ask what the truth is, he should answer the question forthrightly, by God. Don’t give them method. Don’t give them tools of inquiry. The good shepherd leads the sheep. He does not give them the tools they need to lead themselves.

No one follows a method across a battlefield. They follow a man, if that man inspires love and commands respect. I am not suggesting that the teacher is a purely dogmatic creature who speaks in nothing but credos. The teacher does ask terrifying, loaded, provocative questions— as did Christ. However, the idea that the teacher should not be a sage is simply an attempt to enshrine as necessity what is sadly true by misfortune. We do not have enough sages. If you are lucky enough to find a sage, put him on a stage. Why would you put him anywhere else? If you found a sage, would you not be vexed if he kept saying to you, “But I want to hear what you think.” What I think does not matter! Our time is limited! A sage belongs on a stage. It will be easiest to see him there. Be silent and listen to him. The students are quiet for the teacher, and the teacher is quiet for the Canon. Having a Socratic dialogue will only be of value after the students have imbibed much wisdom for a long time. Socratic dialogue presumes a great moral and intellectual formulation has already been established. Socratic dialogue is insufficient, by itself, to create a stable place to leap off. You would not lead a kindergarten in a Socratic dialogue about chastity. What exactly has taken place by seventh grade that makes us think such a thing appropriate?

The surest model for the good classroom is the nave of a church. A powerful preacher does not lead discussion. He proclaims the Truth. He upbraids, cajoles, pleads, weeps, yells, whispers, begs, implores, praises, condemns, illuminates. These are the tools of the teaching trade. The congregation faces the minister, for he is the convener. Proper authority sets people at ease. There is nothing worse than a meeting where no one is obviously in charge, and thus even the chatty, senseless attendees believe a great many stories and questions are necessary before a theme for the Christmas party can be chosen. I enjoy obeying people who are in charge, and when it is my place to be in charge, I use my authority as a service and comfort to the people in my charge. “Relax. You have finally come to a place where your opinion is not required. Enjoy the serenity of your own silence, and the silence of the people who don’t know what they are talking about. They will resume talking the second class is over, but for now, the Canon is king, and I am going to show you how to serve with exuberance.” I enjoy obeying Homer and Burke. I enjoy obeying the principal at my school and the headmaster of the school. I enjoy appealing to my bishop as the one who determines what I am and am not allowed to confess, to believe.

My hero is the centurion who had greater faith than all Israel— the man who knew his place, who took orders from some and gave orders to others. This man was a breath of fresh air to Christ. There may be something encouraging about the student who approaches the teacher and says, “So, I want to push back against something you said in class…” but the relief and peace of the teacher comes when the student says, “What must I do to be saved?”