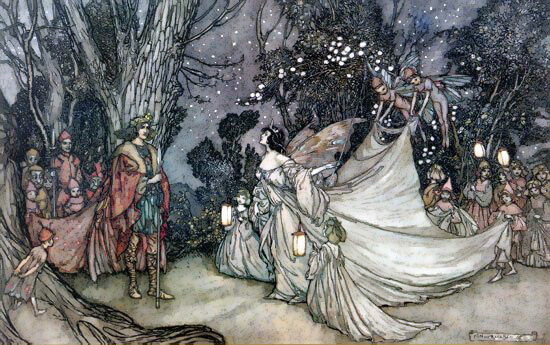 Probably, when your little child catches the flu and lies in bed, shivering and miserable, and asks you why she hurts so, you tell her that she caught a playmate’s germs, and they made her sick. Probably, this answer does not do much to console or to satisfy either of you, though you both accept it as truth.

Probably, it does not cross your mind to tell your little child that bad, mean fairies made her sick. Probably, if that answer did escape your lips, she would be intrigued. You, on the other hand, would feel the discomfort of telling an untruth. But would you be?

The most ridiculous questions can contain the weightiest truths; permit me to theorize why this might be among them.

Shakespeare introduces us, in A Midsummer Night’s Dream, to one of the more impish figures of English literature: Robin Goodfellow, better called Puck. At first meeting Puck, a fellow fairy exclaims, “Are not you he / That frights the maidens of the villagery, / Skim milk, and sometimes labor in the quern, / And bootless make the breathless housewife churn, / And sometimes make the drink to bear no barm, / Mislead night wanderers, laughing at their harm?” To which Puck replies, “Thou speakest aright; / I am that merry wanderer of the night”—and proceeds to lengthen the list of his mischievous misdoings. More than an invention of Shakespeare’s imagination, Puck’s antics illustrate the way that folklore (and folks in general) once sought to explain the world. When faced with extraordinary or unforeseen happenings, they posited some kind of agency—a personality back of the predicament.

To a modern person, of course, this habit seems quaint, charming, superstitious, and stupid: we think bemusedly of any people who seriously proposed a fairy crouched behind their daily mishaps. And to a Christian, this habit seems pagan; that it was a commonplace in medieval Christendom testifies to the intermingling of pagan and Christian belief and custom that plagued the faith until . . . well, until we came along.

Like much of modernity, the change in our default thinking traces its seeds to the Renaissance, its flowering to the Enlightenment; and the fruition of these movements was the scientific method. Far more than a process for investigating the natural world—as which it has, indeed, enabled astonishing and admirable discoveries—the scientific method was embraced as a standard of truth, and its criteria of observation, repeatability, and explicability became our default means of evaluating all of reality.

It has often already been pointed out that transcendence was the casualty of this transaction. If observation, repeatability, and explicability are the marks of truth, then truth is always and only material—for nothing spiritual can be observed, repeated, or explained on demand. The only religions that fit comfortably in such a system are atheism, which denies all transcendence, or deism, the belief in a clockmaker god who wound up the universe and left it to run, which affirms transcendence from a comfortable irrelevant distance.

Every phrase of the Christian creed contradicts these Enlightenment assumptions. God as Father Almighty, Maker of heaven earth; Jesus Christ conceived by the Holy Spirit and born of the Virgin Mary; the Holy Spirit speaking by the prophets; the communion of saints, the forgiveness of sins, the resurrection of the body, and the life of the world to come utterly, joyously, and even a bit pertly defy any notion of a closed universe, insistently declaring the constant convergence of material and spiritual.

Thus, in belief, Christians deny the philosophies of naturalism and materialism, teaching their children that the Creator God daily sustains them, that they through prayer can speak to Him, that God’s Son wrought miracles for such as them. He is the image of the invisible God, the firstborn of all creation; by Him all things were created that are on heaven and on earth; by Him all things were made, and in Him all things consist; of Him, and from Him, and to Him are all things!

But our language undermines our beliefs. For, though we teach that all creation is actively sustained by a loving God, we talk as though it goes on its merry way quite well without Him.

Think of it: how often do you explain a natural occurrence to your children—to yourself—as the action of God? Or how often to you punt to cells and electricity and gravity and photosynthesis and yes, germs, to explain the ordinary and extraordinary wonders in which you swim each day? The language that you speak, more often than the beliefs you affirm, express and shape the world as you know it.

I do not mean to be extreme; I have no wish to argue the existence of cells and electricity and gravity and germs, or to debate their role in my daily life. But I do think that to speak only in this way is to affirm a naturalistic world in speech. For it does this: it explains the natural world by cause-and-effect, rather than by agency, and the substitution is profound. Cause-and-effect is impersonal and automatic, while agency is personal and volitional. It is the difference between active and passive voice: the language of agency says “God made the world,” while the language of cause-and-effect says “The world was made.” And though the two do not contradict, to speak always in terms of cause-and-effect is to always leave God out.

This is why, when I am feeling rebellious, I contemplate telling my children-to-be that fairies and not germs make them sick. I want them to see the world as a personal place, a theatre of agency, in which we play a part beside angels and demons and principalities and powers, as the trinitarian Playwright weaves a plot from all our misread scripts and impious improvisations. I want them to hear His voice in the thunder, over the racket of expanding air-atoms, and to see His hand in the hurricane, albeit gloved by a swirling of waters.

To say “A fairy made you sick,” though it hardly says all this, at least affirms a world of agency. Indeed, I think this is what fairy-stories really meant to affirm all along—not necessarily that fairies are the culprits for mischief; there is already a tone of playfulness in Shakespeare’s blaming of Puck for butter that won’t churn and beer that won’t foam—but that a happening points towards a person, though a chain of cause-and-effect lies between. Theologians call it a distinction of primary and secondary causes. Both are true, good, beautiful, and real. And if fairy-stories could at least train my children’s minds to seek a Person back of a cause, I’d be content. But there is a better way, I think, a better pattern for our speech.

“He lays the beams of His chambers on the waters; He makes the clouds His chariot. . . . You make springs gush forth in the valleys . . . You cause the grass to grow. . . . You make the darkness, and it is night.”

We would, finally, not inhabit a clockmaker-universe, but a whole world in God’s hands.