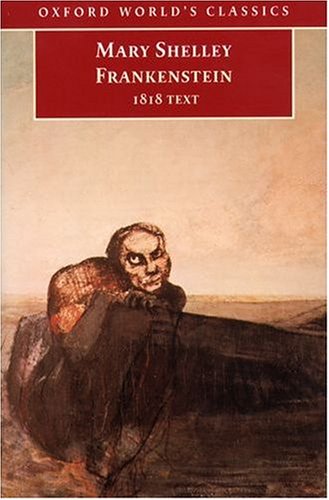 Mary Shelley’s mother and father, Mary Wollstonecraft and William Godwin, were both in the business of making and selling educational books for children. For many years, William Godwin ran a book store and publishing house which sold pamphlets and textbooks and storybooks of his own composition. Mary received no formal education, but had ready access to a library which she put to good use.

Where does a man go wrong? Despite the Romantic trappings of Frankenstein, Shelley eschews the perfection of children and suggests the young can be corrupted by their parents from a startlingly young age. Discerning the origins of Victor Frankenstein’s perverse use of nature and other people is no easy task, not because the origins are so obscure, but because they are so plenteous.

Victor’s father marries the young orphaned daughter of a friend and he “strove to shelter her, as a fair exotic [flower] is sheltered by the gardener.” After Victor is born, his parents coddle and shelter him, as well, treating him as “their plaything and their idol.” Recalling his youth, Victor repeats a mantra likely taught to him by his parents, namely, that “every hour of my infant life I received a lesson of patience, of charity, and of self-control, I was so guided by a silken cord that all seemed but one train of enjoyment to me.”

The only way such a perfect life may be passed, though, is without the fear or threat of others. While the Frankensteins own a house in Geneva, they live in a separate residence three miles away. Victor claims his parents passed their lives in “considerable seclusion,” and that his only playmates while younger were an adopted sister, Elizabeth, and Henry Clerval, to whom Victor is romantically attracted.

Some may object that reading homosexual inclinations into Victor’s relationship with Henry depends on an overly postmodern hermeneutic anxious to find contemporary prejudices and neuroses in the past. However, it is the same fear of otherness, not only in Victor but in his entire family, which prompts his mother to— on her deathbed— make Victor swear he will marry Elizabeth. Repulsed by the thought of an incestuous relationship, but equally ashamed to name his love for Henry, Victor goes off to college and creates a human being all by himself. Sexual union with a woman means surrender to a human radically different from himself, however, Victor has been raised in seclusion and he is terrified of otherness.

While young, Victor’s parents present him with Elizabeth as “a present” and “a possession of [his] own,” and finally his mother requests that he sexually unify himself with that which is already his. Victor has learned that love is concerned with ownership, control, certainty, safety, and inevitability— not liberty and surprise— so it makes sense that the unpredictability of a child which results from a union of Other and Other would intimidate him. The child which Victor creates is monstrous because it does not issue from a selfless love, thus the child can only be treated as a threat to the autonomy of the lone parent. Victor’s child is not the paradoxical, mysterious fruit of the union of autonomous flesh with autonomous flesh, but a pure and lonely extension of a single man’s singular interest in protecting himself from the unknown. The child leaves no room for Victor’s wonder. The child is not a sign of submission, not a sacrament of mutual yielding. It is an ouroboros, a dragon, a monster.