Fixing Your Dress Code Problems: An Homage To Sisyphus 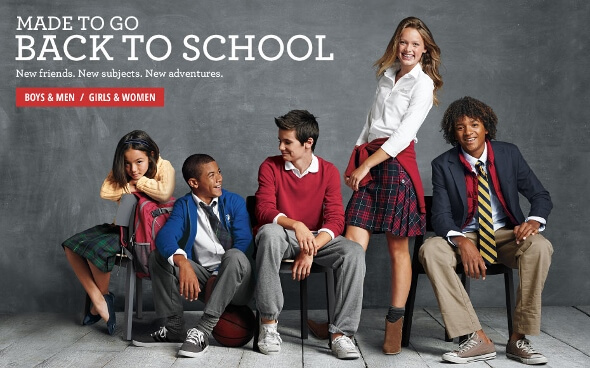 Let me go out on a limb: your school has some dress code issues. It might be too strict, or it might be too loose, or it might be that only two teachers in the whole school actually enforce it and they’re tired of playing bad cop. Maybe the dress code is worded in such a way as to create an endless possibility for loopholes, and students regularly appeal to the letter of the law. Maybe the dress code is so specific you need doctorates in fashion, costume history, and mathematics to determine if a student is actually violating it. Is that sweater Majorelle or Iris? Hang on, let me find my Pantone catalogue …

Every summer, in homage to Sisyphus, the dress code is changed to be more easily enforced. Teachers are resolute about policing the changes for the first quarter, but then the weather gets cold, jackets come out, teachers fall behind in curriculum, and no one can be troubled to enforce the proper length or color of socks when they’re three hundred pages behind in Jane Eyre.

From the moment our first parents decided to begin clothing themselves, dress codes have been a problem. The Almighty regarded Adam and Eve’s initial choice of outerwear and essentially said, “No way. You’re going to put on something a little more appropriate.” This was the first instance of an argument that has carried on ever since, the argument over what kids can get away with wearing. Kids want to look ridiculous, and old people want them to look dowdy. I’m only being a little facetious.

No one cares about clothes as much as teenagers do. No one. Coco Chanel, Miuccia Prada, Cristóbal Balenciaga… none of them cared as much about clothes as this fifteen year old boy I know who wears his uniform like a hair shirt and can’t wait to get on an eight dollar H&M tank top the second school gets out. He’s most teenagers, though. Clothes are a matter of salvation. Clothing is the earliest and most significant manifestation of the self, the truncated image of our person which we endlessly try to refine and perfect. Chanel might have thought the right outfit was heavenly, but she did not think hell awaited the woman who failed to find it.

Prior to the entrance of sin into human history, Adam and Eve were naked and they were not ashamed. Adam was not ashamed to be naked because he did not know he was naked. He was created to contemplate God and God’s gifts. Adam did not know himself as a self. Rather, his knowledge of his person consisted entirely in knowing God, in whom Adam’s person was hidden and then diffusely revealed in creation. Adam did not know Eve was naked because he had no one to compare her with. He could only compare her with himself once he turned from a complete person into a self, and this is precisely what happened when Adam rejected God and turned inward.

It is not surprising that most people begin adopting and consuming self-images (punk, goth, nerd, jock, preppy, ROTC recruit) about the time they pass through what many Christians refer to as “the age of accountability,” the age of early adolescence. As with Adam and Eve, our earliest expressions of self are in clothing. When we come to understand the shame of our sin, we want to cover it. The clothes our mothers have dressed us in for years are no help, because those clothes no longer inform us. Those clothes are what we are— those clothes are our nakedness— and we want to be something other than what we are. We want to look like something other than our exposed, helpless bodies. So, to the mall. To Hot Topic. And when Hot Topic has become our skin, on to Hollister and then to The Gap and then to the stores for adult selves, like auto dealerships and real estate agencies.

We come to understand ourselves as selves in a moment of weakness, in a moment of corruption, in a moment of turning aside from God. “I’m not your stupid little kid anymore,” we say. We feel shame and fear, and we know that God is proven true in his promise that “On the day you eat of it, you shall surely die.” The search for a self is the search for something permanent, something powerful enough to resist the grave. We cloak ourselves in an endless series of new identities, disguises, masks. This is simply the search for some place sufficiently covert where we can hide, just as Adam sought refuge in the trees of the garden.

All this to say, the dress code is one of the most ancient problems of the human race. There is precious little chance that your school will ever be in such a place that someone will say, while sipping a martini at a faculty meeting, “Remember when we used to have dress code violations? Glad that’s over.” Dress code problems are human problems. Eternal problems. The dress code violator you will always have with you…

I say this because I talk with teachers, from time to time, who seem genuinely baffled that the dress code is so hard to enforce, or so hard to obey. “Wear the right socks. What’s so difficult about that to understand? Black socks. Black socks. Your socks aren’t black.” It is good for teachers to fight the unwinnable battle against dress code violations. It is good for teachers to struggle to achieve an order that will never come. We battle petty violations of the dress code not because some Utopia will be ushered in at the end, but because it is good for our own souls to commend order and decency to those for whom we are responsible.

I don’t remember it perfectly, but I once heard a story about a minister who fielded a complaint from a parishioner about how reading his Bible didn’t actually help him quit his sin. The minister said, “Try this. Get a big old wicker basket, maybe something from the attic, and next week, I want you to pour five gallons of water in the basket every day.” The main complained, “All the water will drain out.” The minister said, “Still.” So the man did as he was told and came back the following Sunday, saying, “No matter how many times I poured the water in, the basket couldn’t hold it.” And the minister responded, “No, although I bet the basket was a whole lot cleaner by the end of the week.”

Enforce the dress code every day of your life. Clean those baskets. Don’t be discouraged when they don’t fill.