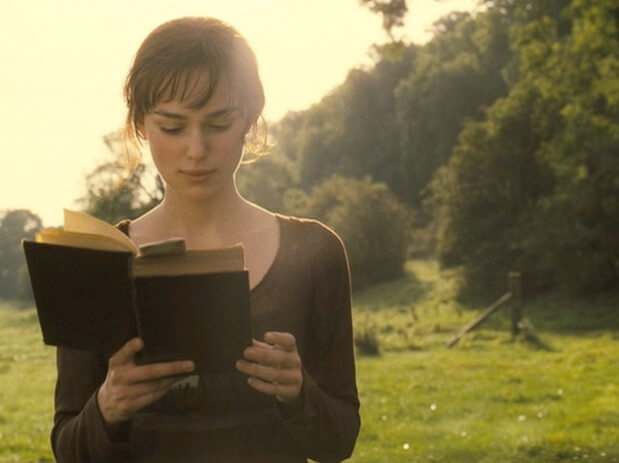 When Darcy appears, girls swoon; and when Jane Austen speaks, they listen. Countless TV adaptations and spin-offs have helped establish her as an authority on all things love and romance, even (or especially) amongst teenage females—an astonishing feat for an eighteenth-century spinster in the age of Gilmore Girls.

But, while many count Austen an authority on relationships, few view her as an apologist for classical education. Yet this she indeed is—albeit with her quintessential subtlety and wit.

“Why do we only read old books? Don’t modern people have good thoughts too?” “Will this help me get into college?” “I just can’t get into these classics.” “This class doesn’t have any connection to my career goals.” “How is studying all this stuff helping me spread the gospel?”

Classical education is not merely a classroom enterprise; it’s also an apologetic endeavor, as shown by teachers’ frequent need to address questions such as these. But, while many students are sincere in their concern for modern thought, college or career preparation, and evangelistic fervor, I’d wager another concern proves more captivating to their attention in the school hallways and city streets outside the classroom. This concern underlies much apathy towards serious learning; its allure is stronger, and its distance from the world of the library seems greater. For teenagers, as for us all, the urgent longing to be found lovable sounds a most compelling call, and overshadows the more circumspect invitation of Lady Wisdom.

Students would hardly dare include in their battery of classical education counterarguments the proposition that “Relationships and crushes and dating and finding someone to love are more important than school”; put that way, it does sound petty. But the underlying desire—to be proven worthy of love—is not only fundamentally human, but divinely oriented: human beings are made for the love of God, expressed analogically in love for one another.

And the theme of love’s worthiness lies at the heart of Austen’s plot lines. Darcy and Mr. Collins both assume themselves to be worthy of Elizabeth’s love; after being duly disabused of the assumption, Mr. Collins departs in a huff, while Mr. Darcy embarks on a journey to become worthy. Later, Elizabeth endures a period of doubting her own worthiness of the man she realizes she has come to love (though not for the class objections that weigh so strongly with Lady Catherine). Emma Woodhouse experiences this as well. Meanwhile, Mr. Knightley vents his frustration that Frank Churchill does not deserve the love of Jane Fairfax, and Colonel Brandon endures the pain of being thought unworthy by Marianne Dashwood, who compares him with Willoughby, whom he knows to be a scoundrel. Anne Elliot resigns herself to having forfeited her worthiness of Captain Wentworth’s love by being once persuaded to reject him.

This concept of being worthy of love, expressed so clearly in Austen’s world, finds scant expression in modern chick-flicks or conversations about relationships. For Austen, the road of romance is an exploration of character, correlating with worthiness (a quality open to growth through discipline), while in modern chick-flicks, it’s an exploration of emotion, correlating with attractiveness (a fixed quality beyond the reach of will). Elizabeth and Darcy must come to recognize and refine their own and own another’s moral, intellectual, and social, as well as emotional, allegiances, while typical Nicholas Sparks characters seem mainly preoccupied with sorting through feelings.

Of course, in Austen’s novels, plot carries much of the burden of character exploration. The revelation of past secrets and the making of present choices are the kiln through which character is exposed, refined, or found wanting. But with delicate artistry, Austen extends the refining process to another level through the recurring motif of reading.

Throughout her canon of six novels, Austen teases out her theme of love’s worthiness through commentary on characters’ reading habits. Peter Leithart notes in Miniatures and Morals that “Over the course of Pride and Prejudice, nearly every character’s relation to books is noted, and this provides an important clue to character. Mr. Bennet uses books as a means of escaping from his silly wife; quick and sociable Bingley does not read much; Darcy not only reads widely but has a library that has taken several generations to assemble; Miss Bingley picks up a book only so that Darcy will notice and appreciate her desire to learn; Elizabeth reads, but has many other interests as well.” To that list could be added Emma’s continual making up and subsequent neglecting of reading lists (to Mr. Knightley’s frustration), Harriet Smith’s delight in light fiction, and Jane Fairfax’s model education in Emma; Edward Ferrars’ “spiritless” reading contrasted with Marianne and Willoughby’s shared passion for Cowper and coolness towards Pope in Sense and Sensibility; Catherine Moreland’s fascination with Gothic novels in Northanger Abbey—the list continues.

Tucked subtly into the sparkling dialogue, the comments on characters’ reading habits do not draw attention to themselves, yet they shape readers’ evaluation of the characters. In Austen, men and women’s relationships with books are a litmus of their capacity for curiosity, discipline, wit, empathy, conversation, discernment, judgment, depth, even joy. And in Austen, these traits are what draw men and women to one another. For, beyond a vivacious personality or even a set of fine eyes, these traits signify a person’s capacity to give and receive love. They are the measure of love’s worthiness.

But, as Austen and her characters both acknowledge, relationships with books do not only passively reveal character; they also are shown to actively shape it. “Oh! certainly,” Miss Caroline Bingley famously declares, “no one can be really esteemed accomplished, who does not greatly surpass what is usually met with”—which she lists as “music, singing, drawing, dancing, and the modern languages . . . something in her air and manner of walking, the tone of her voice, her address and expressions.” To which Mr. Darcy as famously responds, “[A]nd to all this she must yet add something more substantial, in the improvement of her mind by extensive reading.” “Improvement of mind” encompasses the traits of discernment, wit, conviction, conversation, depth, curiosity, independence, and teachability that eventually draw Darcy to Elizabeth, and she to him; in a later reverie, she considers how, “by her ease and liveliness, his mind might have been softened, his manners improved, and from his judgment, information, and knowledge of the world, she must have received benefit of greater importance.”

By contrast, lack of education, or education abused, undermine the traits that make one worthy of love. Both Lydia Bennet’s and Lucy Steele’s lack of education is commented upon and regarded as a cause of their fickle conviction and ill-founded judgment; Elizabeth explicitly traces her sister’s demise to the fact that “she has never been taught to think on serious subjects.” Mary Bennet and Mr. Collins seem different in that both give the appearance of studiousness, but neither proves able to bring life to their learning or their learning to life. Poor judgment, shallow empathy, and dull humor are revealed in the ways they abuse the fruits of education by citing clichés as insights or by reading sermons when stories are called for.

But even for the Lucys or Marys or Mr. Collinses whose education has been deficient, Austen offers challenge and hope in the story of romance blossoming amidst a kind of re-education. In the early chapters of Emma, Mr. Knightley converses with Emma’s governess about her charge’s haphazard education, and by the end of the book, sums up the course of their love in the words, “I have blamed you, and lectured you, and you have borne it as no other woman in England would have borne it”; he has been her teacher, and through that has come to love her. Similarly, in Northanger Abbey, the poor instincts Catherine Moreland has developed from Gothic novels and bad friends must be gently and patiently re-educated through the conversation and friendship of her eventual love, Henry Tilney.

In sum, running through the same Jane Austen romances that induce the squeals and captivate the daydreams of today’s teenagers is the conviction that an eager mind and faithful reading are integral to developing the qualities that make man or woman not only alluring, but also worthy of love. Not that love can ever be truly deserved; another of Austen’s themes is the sense of love as gift, as grace. But even as the way of grace must be prepared by repentance—a paradoxical kind of “worthiness” to receive it—so the way of love must be prepared by the development of a character able to recognize, receive, and return it, and in that sense, worthy of it.

And in that insight, Austen makes perhaps the most compelling and concise apologia for classical education that could be offered to a teenager.

Why classical education? To deserve a Mr. Darcy.