The Classicist in the Suburbs 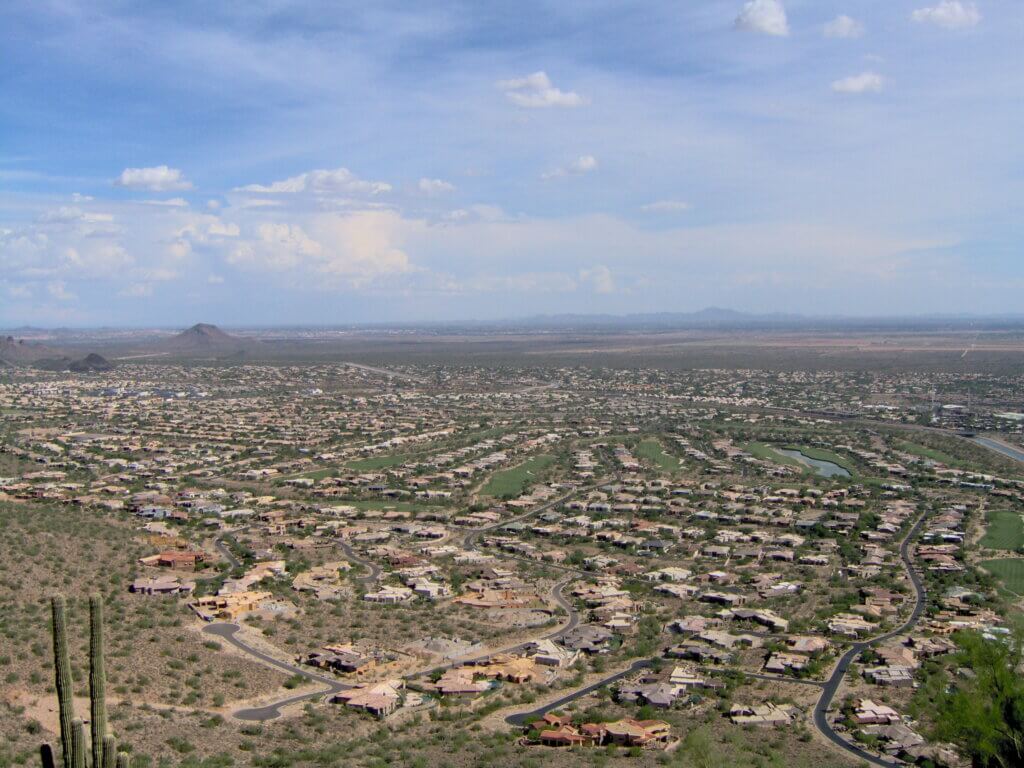 Classicism fits comfortably in the city, with its suggestions of the polis, arts, architecture, academia, and culture; and it fits comfortably in the country, with its evocations of quietude, contemplation, tradition, and permanence. But in the suburbs—the place, increasingly, that most of us call home—isn’t classicism rather an ill fit? Can it be taught, practiced, and lived out, with integrity, in the landscape of strip malls and subdivisions?

Since childhood, I’ve lived in the same sunny city on North Florida’s eastern coast—“an hour from Georgia, half an hour from the beach,” as I learned to describe it early on. Neither urban nor rural, it is a large city of small neighborhoods, each with its own history and personality, and all connected by a broad river, whose flashes of diamond-sparkle and undulating blue meet the eye wherever you find yourself. It is a pleasant place to have grown up, and to live.

But, over the past five or so years, pressure for expansion has squeezed my city more and more into the shape of suburban sprawl. Tracts of both native woods and towering slash pines, grown for lumber, have been clear-cut to make way for subdivisions crammed full of quarter-acre lots and cookie-cutter houses, boasting incongruous names like “River Meadows” or “Piney Cove.” Strip mall developers have ensured that their chain stores repeat every five miles along the main roads, and—since it’s Florida, after all!—have naively landscaped their asphalt acres using a variety of palm tree that would blend better with Miami’s flora than it does with our moss-draped live oaks. New highways are being constructed, with their requisite overpasses and retention ponds, and old ones expanded into six-lane speedways edged by concrete barriers. And finally, filling every leftover nook and cranny, apartment complexes and gas stations seem to spontaneously generate overnight.

Few places remain in my city where the landscape that confronts my eyes does not contradict the convictions on which I’ve staked my life. It is a landscape which aims to be functional, but not beautiful. The method in which it is being built up maximizes efficiency, but gives little care to endurance. And, because of its design—sprawling malls and roads contrasted with highly compressed living spaces—it encourages a lifestyle in which the main action of life is the flurried pursuit of material stuff, while home becomes the place to hastily consume the stuff gained abroad, which, because it proves cheap and dissatisfying, generates a need to go get better stuff. Public spaces which could balance this tendency—parks, nature preserves, museums, galleries, wherein the human spirit rather than the human wallet is addressed—are noticeable mostly by their absence. It is, overall, a place structured for the pursuit of profit, not virtue; a place wherein consumption happens more naturally than contemplation; and a place in which one’s associations with other people are more collectivist (“people” are the excess cars causing annoying traffic, the blank-faced shoppers creating long lines, etc.) than communal.

Because this landscape perpetually fills my vision, it weighs heavy on my mind. It is sorrowful to watch a place I have loved irreversibly stripped of its beauty and vitality. It is disillusioning to feel that no one—at least, not the developers—recognizes or cares about the ideals which I would like to believe are intrinsic to human nature. It is difficult to shape a life around those ideals when so many of them flourish in community, and yet the circle of my nearby acquaintance who share them is small. And, some days, it is tempting to think that neither classicism, nor a life embodying it, can thrive in the suburbs.

But—is this even a classical way to think?

Plato philosophized during the Golden Age of classical Greece; Virgil wrote his epic to apotheosize a civilization still at its peak, Michelangelo’s art received the affirmation of a culture enthusiastic in its own revival; and Shakespeare’s dramas delighted an audience bright with the confidence and accomplishment of Elizabethan England’s zenith. But the great works of classicism have not grown only in fertile soil, like persnickety plants requiring a hothouse environment. Augustine wrote City of God against the crumbling of the Roman Empire; Boethius composed Consolation of Philosophy from the prison where he had been placed by the barbarian Ostrogoth emperor whom he’d served; Dante produced his Divine Comedy during his exile; and Milton dictated Paradise Lost after the English Commonwealth he had helped to found had been deposed in favor of the old, corrupted monarchy. Not only the spirit and lifestyle of classicism, but even its greatest achievements, have sprung from rich and poor soil alike.

So I must conclude that the landscape in which I find myself, though it may help or hinder, can actually neither ensure nor preclude the life I hope to pursue. And rather than lamenting the hindrances, I would do well to study and imitate those who labored in far more discouraging situations than my own.

Here, then, are a few of the admonitions I’ve lately been giving myself.

First—be humble enough to acknowledge the ways that the suburban landscape actually facilitates my pursuit of classical ideals. The comfort and convenience afforded by grocery stores every few miles and labor-saving devices throughout my home provide me with a leisure that none but the very privileged of former eras could employ in classical learning. And even today, a rural setting—though more in keeping with classical ideals—would be hard-pressed to provide the leisure requisite for classical contemplation and creativity.

Second—claim the gifts of clarity and determination that can be wrested from suburbia’s disadvantages. As with any situation in which a minority pursues a separate lifestyle than the majority, the disadvantages that the suburban classicist will face can be accepted as challenges to be overcome, motivation to live differently, parables illustrating why other choices are ultimately less worthy.

Third—while acknowledging the gifts of suburbia, cultivate the disciplines to use them wisely. I think this especially means learning to discern the difference between a comfort or convenience and a necessity. Guard against “conveniences” that actually devour the leisure they promise (for instance, the convenience of highways and cars that lead us to commit to long commutes for work or extracurriculars) and “comforts” that flatten the human experience we expect them to enrich (as do so many of the gadgets around the home and yard that keep us from practicing the crafts and skills which have woven a rich fabric of life for the generations before us). Use comforts and conveniences judiciously to preserve leisure rather than disperse it.

Fourth—take joy and energy from “practicing resurrection,” as the last line of Wendell Berry’s “Mad Farmer Liberation Front” would have it. The best (the only) place to look for resurrection is among the dead; hope is only possible when circumstances do not already assure a good outcome. Though perhaps a more classically-disposed landscape and culture could help one to travel further, faster along the path of contemplating goodness, truth, and beauty, the traveler whose path is rockier might find more joy, more sense of satisfaction and significance, in each hard-won step forward. And he will be more eager to share with others the depth and richness of the tradition they have not yet encountered.

I don’t have much hope that suburbia’s landscape and lifestyle can be harmonized with classicism’s ideals. But I do believe that the classicist who lives in suburbia can pursue those ideals with a dedication, fervency, and joy that, paradoxically, may be energized by the very disadvantages he confronts—if only he chooses that path, rather than the mire of cynicism across which it leads.