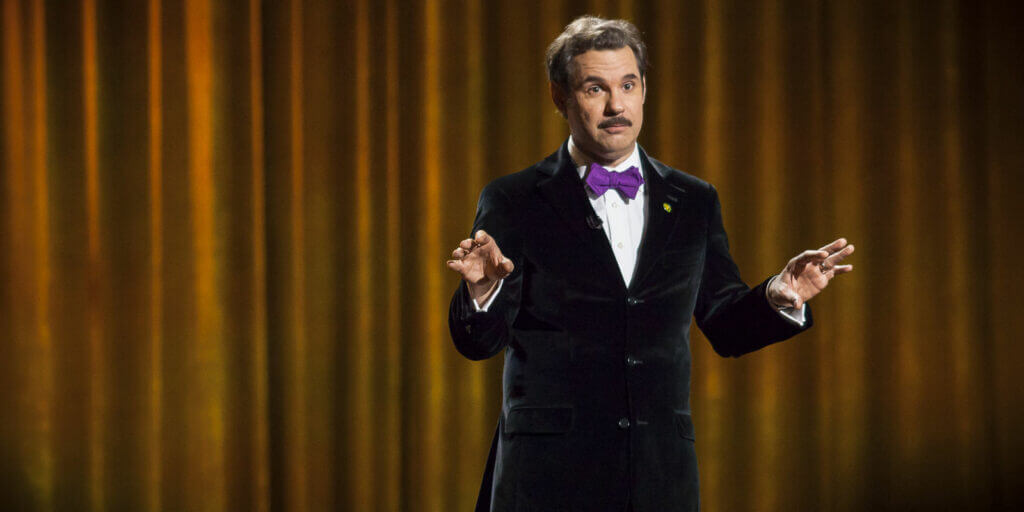 One. The teacher of virtue and the stand-up comedian very nearly have the same job: both stand before a room full of people and tell stories and make observations which highlight the absurdities and idiosyncrasies of the human condition. The comedian gauges the audience by observing slight alterations in human faces. He must clock the mood of the audience, measure the volume of responses to certain stories and wager how far the audience is willing to go on dicier subjects, and determine if they are clued in to subtle cues which set up jokes later in the set. So, too, a good teacher is a student of human faces. The good teacher must learn the art of interpreting a darting glance, a vacant stare, fidgeting fingers and all the thousands of ways in which guilt, shame, hope, and intrigue are microscopically communicated through nearly invisible changes in the mouth and eyes. Like the comedian, the teacher must be able to measure and remeasure the mood of a room on a minute-by-minute basis. He must know when he is losing the class, and what kinds of gestures are apt to win them back. The good stand-up comedian knows when a funny voice, a long pause, or a sudden yelp is necessary, and he determines on the fly when a punchline needs to come sooner than later because the audience is losing patience with a story. A good teacher can glean techniques for speeding up, slowing down, and raising a mood or lowering the mood by watching an old stand-up pro work a crowd for an hour. Anyone who has ever been to a staff meeting knows teachers need help reading a room. Most meetings are over more than ten minutes before they adjourn and I am regularly amazed at how few people know that, “Does anyone have any other questions?” is code for, “If everyone can hold their tongues for the next three seconds, we can all go home.”

Two. Good stand-up comedy depends on profound self-knowledge. The stand-up comedian develops the ability to judge which of his idiosyncrasies are unique to himself, and which are common to all men. On a walk to the store, a stand-up comic nearly trips over a crack in the pavement, but to avoid embarrassment, he plays it off cool and breaks into a jog so it appears the sudden stutter in his step was intentional. Moments later, he realizes that other people likely do the same thing, even though he has never seen anyone do so. Or else he intuits that pretending to break into a jog after nearly tripping is so egotistical and pathetically self-serving, it will prove analogous to a thousand other egotistical gestures your average egomaniac performs in a day. Sometime later, he begins a joke with, “You ever see a guy almost trip over a crack in the pavement and then pretend that at that exact moment, he decided to start jogging… while dressed for his job at a bank?” The audience laughs, but only a few members laugh because they have actually seen or done such a thing. Everyone else laughs because they think, “That sounds pathetic, and I also am pathetic, and though I have never seen anyone break into a jog after almost tripping, that is the kind of thing a pathetic person like myself would do.”

In similar fashion, the teacher of virtue must observe (from a third person distance) his own tendency to suddenly drift off into speculation about, say, the Wu-Tang Clan while silently talking to God in bed before falling asleep. He must note that, mere moments ago, he was praying that God would be merciful re: his niece’s throat surgery tomorrow, and that he is now wondering how many albums Method Man did with the Clan before going solo. The teacher must contemplate this raw, embarrassing fact about his own attention span and determine if all people are like this, some people are like this, or if he alone does this. If he intuits that he alone does this, it will serve no purpose to him in a lecture. If he intuits others do this, as well, it will prove a fitting illustration in a lecture about self-control when teaching Augustine’s City of God. In watching stand-up comedy, the teacher of virtue can gain a greater ability to intuit what personal experiences have universal value, and what experiences do not.

Three. When I bring up stand-up comedy, someone invariably says to me, “I love stand-up comedy. Have you seen Brian Regan? He’s good, and his stuff is clean, too.” I do not find Brian Regan funny. I am skeptical of anyone who thinks a comedian worthy of acclaim simply because his routine is not vulgar. While I have no special fondness for dirty jokes, I do believe that comedy is simply a kind of offense— a very controlled offense shared between friends. Brian Regan’s material might be clean, but it is also too friendly, too safe, and accordingly banal. Good comedy is an insult which a man longs to hear. There is an anarchy to good comedy which suggests the poor are being given bowling pin-sized turkey legs to eat and the rich are being sent away with fistfuls of Cheerios. Comedy marvels at the dual nature of man— immortal spirit, farting body— for comedy always involves the juxtaposition of high and low, friendship and shame, dignity and embarrassment. The punchline to the oldest joke in the book is a mockery of man’s desire to overthink and over-intellectualize everything. To get to the other side. Comedy employs laughter to fill the chasm between high and low. Laughter is a bridge.

For this reason, there is usually an element of danger in good comedy, for every joke the comedian tells has three potential victims: himself, his audience, and all mankind. The best comedians are metaphysicians, for in minutely observing their own words and deeds, they can determine which of their sins are universal. We laugh (in fear) at the audacity of a man who confesses the finest nuances of his selfishness, his ignorance, and his laziness, for, in laughing, we are admitting we have done the same, and that we have no defense for our actions. Good comedy is “high-wire truth-telling,” as Pitchfork’s Ian Cohen once put it. The laughter of the audience is a veil which both conceals and reveals they are complicit in everything the comedian confesses.

Clean comedians (at least the ones who market themselves that way) are rarely willing to genuinely insult anyone, and their audiences laugh as though they are being skewered when they are actually getting off scot-free. In the first several months The Babylon Bee was up and running, the satirical news site ran a dozen stories with headlines like, “Local Calvinist Drinks Dark Beer and Has Beard,” as though this was really sticking it to those bearded, dark beer-loving Calvinists out there. It did not take a rocket scientist to figure out the writers were Calvinists themselves, and somewhat squeamish at that. If The Bee had opened with stories about Presbyterians trading exclusive rights to the Epistle of St. James to Roman Catholics in exchange for Matt Walsh and half a dozen of the more savage Flannery O’Connor stories, it would have been a different story— but that’s someone else’s joke to make. To their credit, over the last year The Babylon Bee has proven willing to test the thickness of readers’ skin. Comedy proves human community is built on something other than flattery, but this means comedy is necessarily confrontational. When I am finished watching a stand-up special, I want the same feeling of self-awareness which attends an anxiety-inducing, no holds barred sermon. Brian Regan joking about the phonetic pronunciation of “phonics” just doesn’t cut it.

Four. A good stand-up comedian is a master of the five to ten-minute story, which is also an art every good teacher should hone over the course of a career. Every philosophy teacher should have an absolute bare minimum of fifty stories he can tell at the drop of a hat. If I was conducting interviews for a position teaching great books, the first question I’d ask any applicant would be something like, “Can you tell me a sad story that takes place in a library? It has to be true,” or, “Tell me an autobiographical story about honesty which is set in a restaurant. Don’t change any of the names.” A pro could provide both of these stories, a rookie could not, but a rookie worth hiring would not balk at the demand to produce such stories— he would understand how the demand was connected with lecturing on virtue to a room full of teenagers. Most great books make scores of claims about the good life, and the good teacher knows these claims need to be filled in and fleshed out by a teacher capable of offering many, many illustrations and examples. Given the average running time of most classes, human attention spans, and otherwise busy schedules, a plethora of punchy narratives will enable a teacher to transition in and out of various moods, themes, and modes of discussion.