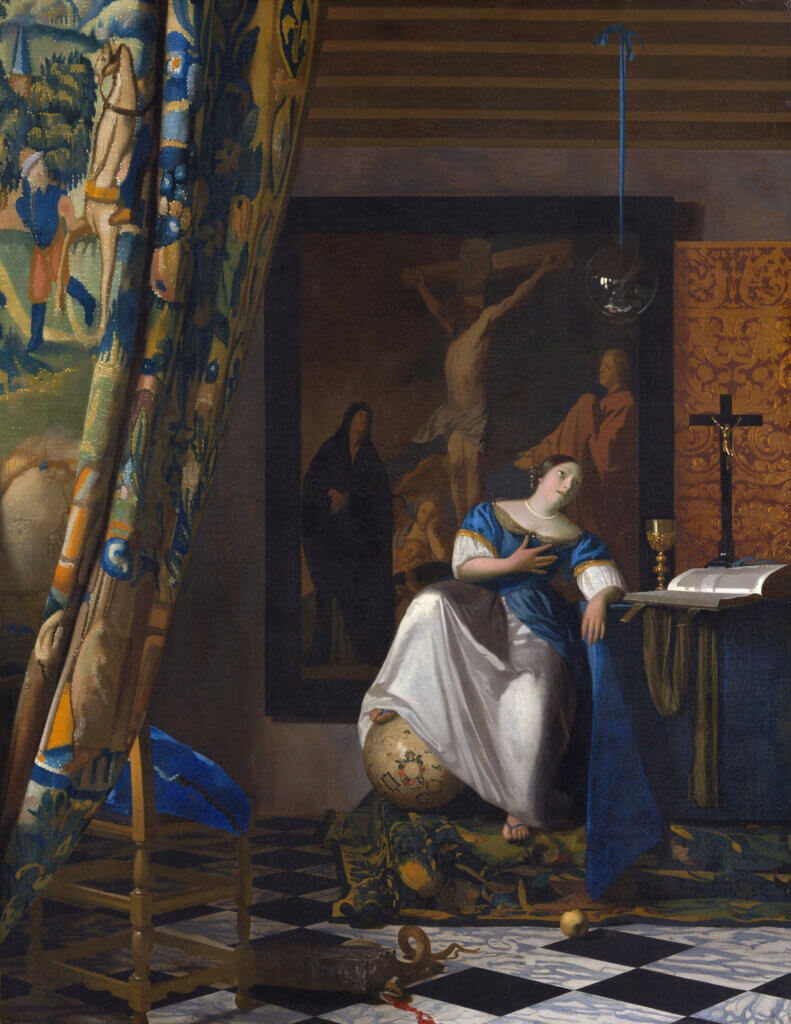 From time to time, I ask my students what words and expressions I use too often. I am not so much asking for their opinions as I am having them point out my own blindness. Yesterday, I asked and one student said, “You always say, ‘I’m going to,’ but you say it fast, so it comes out, ‘Ommina.’ And you say ‘go ahead’ all the time. Sometimes you say them together. You say ‘Ommina go ahead and cancel that quiz.’ You do that a lot.” I had no idea. Or rather, I knew there were things about myself I didn’t know, especially about the way I talk. In previous inquiries, students have pointed out terms I use with too much ease. I say sublime a little too easily, and refer to a person’s prejudices too often. Over the years, I’ve tried to drop a few. I used to lean a little hard on metaphysically impossible. The problem with using a word too often is that it ceases to be a word and becomes more of a sound effect, a noise made not in reference to an idea, but in reference to yourself. If I say metaphysically impossible too often, the term no longer refers to a concept or argument which violates the doctrine of God’s infinitude; metaphysically impossible ceases to describe an illogical intersection between the sacred and profane; rather, the expression means nothing more than, “I am being Joshua Gibbs, and sounding like myself.”

As people who talk a lot, individual teachers are prone to rendering this or that word meaningless through overuse and laziness and imprecision, but teachers as a whole can become guilty of this, as well. By which I mean, this or that teacher may use a term too loosely and too frequently, but entire institutions might come to do the same.

Midway through the composition of this article, I posted the following message on Facebook: I am writing an article for CiRCE at the moment about the most overused words within Christian academic circles. Thus far, I have: biblical, godly, Christian… Other suggestions? Even from those not involved in Christian academics? Words that your Christian academic friends use ad nausuem on Facebook that you want them not to use for awhile? I only have around a hundred Facebook friends, but the comments box filled up rapidly. Not since I last asked my apologetics students to pretend to be agnostics have I seen such windfalls of honesty and righteous frustration.

Here is a short list of words (please, fill the comments box with your own suggestions) which classical Christian educators are guilty of using too often, too uncritically and too casually. A very fine rhetoric teacher, formerly a colleague, once broke students of saying “um” and “uh” during debates by dinging a little desk bell whenever such verbal filler was used. To have the bell rung on you was obnoxious and startling, like getting a stinging snap on your bare calve with a wet hand towel, but it made students aware of their overdependence on “um” and so they slowly were able to leave behind that bad habit. If I could ding such a bell over the use of the following words, I would. Different words should be used in their place; the overused words could take a rest and come back later, refreshed.

Biblical: The most overused word in contemporary Christian education, I often hear the word “Biblical” stand in for “ethical,” “moral,” “true,” “factual,” “logical.” It is also used as a stand-in for any of the virtues, by which I mean I sometimes hear “Biblical” refer to kindness, gentleness, courage, wisdom. “We need to approach giving tests Biblically” often means nothing more than “We need to not overburden the students” or “We need to not frustrate the students by the length and frequency of our tests,” but either of those latter statements is clearer, more precise and less self-satisfied than the former statement. Not overburdening students with a test does not mean that the test has been given “Biblically.” To say that a test needs to be administered or written “Biblically” is also to treat the Bible as though its requirements for test-giving were obvious, lucid, and undebated, which is not the case.

Furthermore, nowhere in Scripture are we commended to do something “Biblically.” We might be told to do something in a manner commended elsewhere in Scripture, but the manner commended elsewhere is not generically “Biblical,” but calls for a particular spiritual posture or virtue or fruit of the Spirit. “Do all things without grumbling or arguing,” teaches Paul, and not, “Do all things Biblically,” even though, presumably, to do all things without grumbling or arguing is also to do them Biblically.

I recognize that the term “Biblical” is a controversial term, and that two persons who disagree on the authority and self-sufficiency and origin of the Bible will probably not agree on a similar definition, but we might all agree that haphazard use of the word “Biblical” will not make the applicability of Scripture more universally appreciated, but rather, stands to render Scripture mundane and profane, polite and circumscribable. Blurring the boundaries between “Biblical” and “true” and “ethical” also stands to limit the potential of the Bible within the imagination of students. Earlier this year, I described the end of Steven Spielberg’s AI as “Biblical,” explaining how the narrative of AI finishes on a distanced, mysterious coda which opens up in a series of esoteric symbols and claims. And, granted, while John the Theologian is not the first dreamer in Scripture, the last book of Scripture is easily the most abstract, the most densely significant. However, all my students thought I meant the end was good, or that it was expressly moral, like one of Aesop’s fables. In moments like this, I find Harold Bloom’s critique of Christianity in The American Religion quite apt; the Bible has become little more than a Kubrickian monolith which requires generic ascent.

Worldview: In the last several months, in articles published here, I’ve made a host of oblique cynicisms about the over-dependence on“worldview.” It would be tedious for me to here make another, although Christian academicians have been complaining of an overdependence on “worldview” for quite some time now.

Ten years ago, Peter Leithart published my favorite critique of worldview, and today, little imagination is required to see how the questions Leithart asks of “worldview” might function equally well of its overuse. The term seems to have been appropriated from Enlightened philosophers and Christianized a little too quickly, too easily, and with too much satisfaction. Leithart writes:

“…“worldview” tends to be highly intellectualist. Ideas, it is often assumed, have consequences, and cultural practices, institutions, and artifacts are secondary embodiments of prior ideas. In reality, ideas are formed within the context of and in response to practices, institutions, and artifacts that are always already there. No one forms ideas in an empty landscape… ”

The rest of that article can be found here.

Christian: The word “Christian” is used three times in Scripture, and never as an adjective, but always as a noun referring to human beings. The status of “Christian” is far more easily applied to persons than to objects; a Christian is one who has been baptized (and chrismated, perhaps) and confesses one or more creeds, at very least the Nicene. Most objects are not baptized, though, and no object can say the Creed, so on what grounds do we call this store “a Christian store,” or that painting “a Christian painting”?

I ask these question not to nullify the term, because in historical epochs wherein Christians live side-by-side with non-Christians, the application of the term “Christian” to this or that thing has always been of profound significance. However, Christians today toss off the term “Christian” with little or no awareness of the acrimony which has beset use of the term over the long haul of history. I would commend The End of Ancient Christianity by RA Markus to you as an introduction to the debate. Markus’s book deals with the emergence of Christian culture in the two centuries following the Edict of Milan, and describes the difficulty of reevaluating everything Roman in the light of the Church. The heat which fired arguments over the issue of Christianizing holidays dedicated to the genius of Rome are illuminating.

Although perhaps even more alarming than overuse of the term “Christian” is overuse of the expression “actually Christian,” as a friend suggested. I don’t know that any slapdash manner of using a word can destroy its meaning faster than by putting the word “actually” in front of it. “Actually Christian,” “actually Reformed,” “actually Platonic” often implies a hidden definition, a secret creed within a public creed, a silent dogma within a spoken dogma, and often enough that secret creed refuses to speak its name. It simply applies superlatives and hopes no epistemological detectives are within earshot.

Godly: Much like “Biblical” and “Christian,” “godly” has more or less come to mean “moral” or “ethical.” Any kid who says “Yes, sir” and keeps a regular haircut is “a godly young man.” When we hear or say “godly,” we make the word into “Godly,” or “after the manner of Christ,” and sadly, at times I am not sure if Christ is much more to our imaginations than an ethical or moral man.

The term “godly” should not immediately have a purely or primarily moral connotation, though, and using “godly” to speak of moral or ethical behavior has the effect of further reducing Christ to a rule-keeper. “Godly” might also be “god-like” or “like a god,” and you’ll note how uncomfortable many people become when you describe a talented high school sophomore who can sing “like a god.” Tell your students “Be godly” in the morning, and they’ll have forgotten before second bell. Tell your students “Be like gods” in the morning, and they’ll be pondering it into the afternoon.

In “Man or Rabbit?” Lewis bemoans the mediocrity of an imagination which understands the divine purely in terms of ethical behavior. Lewis writes, “Morality is indispensable: but the Divine Life, which gives itself to us and which calls us to be gods, intends for us something in which morality will be swallowed up. We are to be re-made. All the rabbit in us is to disappear—the worried, conscientious, ethical rabbit as well as the cowardly and sensual rabbit. We shall bleed and squeal as the handfuls of fur come out; and then, surprisingly, we shall find underneath it all a thing we have never yet imagined: a real Man, an ageless god, a son of God, strong, radiant, wise, beautiful, and drenched in joy.” Not exactly the kid who says, “Yes, sir” and keeps his hair cut. Overuse of the word “godly” has anesthetized our understanding of theosis, our ability to value or even understand spiritual progress, and stands to cheapen the Beatific Vision.