A Case for Pounds (and Feet and Slugs) 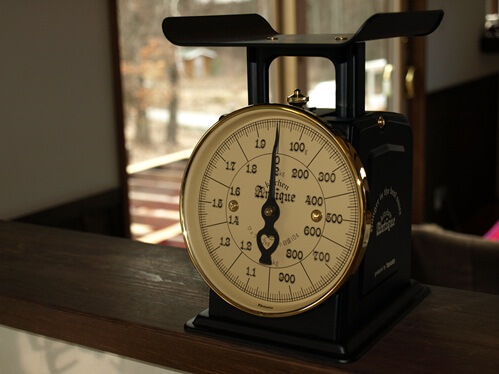 I overheard someone the other day lamenting Americans’ obstinate resistance to the metric system, and I wished that G.K. Chesterton had written an ode to English measuring units. Anyone who could begin an essay with such a line as “At about twenty-one minutes past two today I suddenly saw that asparagus is the secret of aristocracy” could certainly have done justice to a system so marvelously, poetically, truthfully hodgepodge as our units of measurement.

It makes sense, of course, that some of the units are derived from the human body, for humans in general have an incurable tendency to measure all other things—including one another—by themselves. Thus an “inch” is defined as the width of a thumb; a “foot” is, of course, the length of that piece of anatomy, and the fantastic variation in human foot-lengths is witnessed by frequent historical changes in the standard length of the measurement; and the yard, though the word derives from the Saxon gyrd, or stick, recalls one man who actually did proclaim himself the measure of all others, for its length remains equal to the distance between King Henry I’s nose and finger, as he decreed in the eleventh century.

Other units paint scenes from our forbears’ lives, such as those cooks who would scoop out flour with the nearest “cup,” use thumb and forefinger to toss in a “pinch” of salt, and finish is off with just a “dash” of pepper—a dash being, of course, half a pinch. The “barrels” we use to measure petroleum recall the wooden vessels that stored British wine; and, speaking of wood, you owe the quantity of firewood in your “cord” to whomever began the custom of measuring stacked wood with a length of string. If you’ve been irritated by the symbolizing of “pound” with two initials to be found nowhere in that word, thank the Romans who devised the libra pondo, or pound of weight. And whether or not the term “field” describes your suburban backyard, that is what an Old English speaker would hear when you use his word “acre.”

Then there are the units for which Lewis Carroll would undoubtedly have found a place in his unwritten sequel to “Jabberwocky.” A mass accelerated by a one-pound force over one foot per second squared is a “slug”; change the foot to an inch, and you’ll have a “slinch,” which you could also call a “mug” or “blob” or “snail.” In case you were wondering, as you probably ought to be, these units were developed by the United States National Aeronautics and Space Administration; perhaps NASA prefers monosyllabic measurements to reduce complications when sending projectiles into space.

It would doubtless be simpler and tidier and more precise to measure out our lives in meters and grams and liters. But then what would have become of Eliot’s Prufrock, who measured out his life in coffee spoons? Would his poor love song ever have been immortalized, had he used grams of coffee grinds instead?

But in our age, rulers have become tyrants, and all human practices are subjected to the tyranny of measurement, percentage, and assessment, with the metric mindset subtly aiding and abetting. “Meter” is simply Latin and Greek for “measure,” and the lack of story in that etymology leaves impression that its measurement is absolute. Its neat decimal divisions, its ahistorical prefixes—it is the perfect abstract system, and its rhetorical appeal is therefore compelling.

By contrast, the old foot-pound-second system seems haphazardly concrete and historical—as indeed it is. Yet in an age infatuated with both abstraction and assessment, this might be the healthiest possible rhetoric of measurement. We who place implicit faith in “data,” presented in charts and graphs and statistics with great capacity for deception, might benefit from the reminder that all measurement is contingent.

In another age, Americans resisted the metric system because they considered it godless, coming (like so much vintage atheism) from the enlightened French revolutionaries. Well, the old system is not of God, but it is blessedly human, and reminds us that our wisest calculations are only human, too. Feet and pounds and slugs are not, by any means, a major front in the war for truth—but they are good, delightful, and thus, defensible.