3 Things You Must Do Before The End Of The School Year. 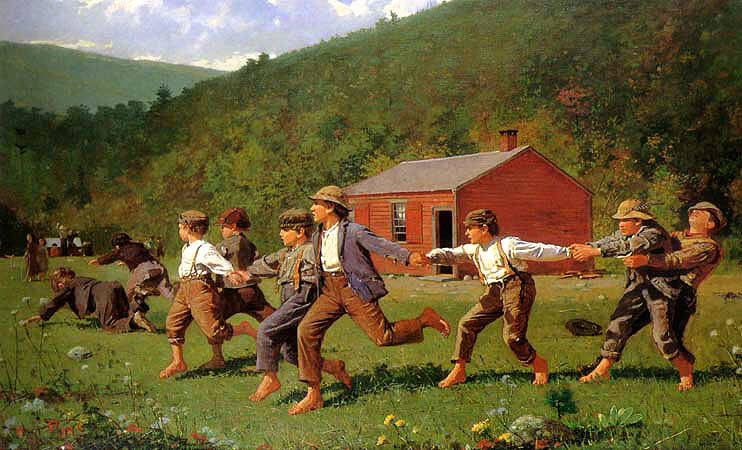 The Church calendar no longer sets the rhythm of our lives, sadly. I suspect my life revolves around the school calendar. The Church calendar commends two long periods of introspection to Christians, Lent and Nativity, as well as a handful of self-reflective, ascetic fasts in between. Festal periods immediately follow. The Church year is dappled, pied, shimmering. The school calendar, not so much. Nine and a half months of the Apollonian are followed by ten weeks of the Dionysian. Granted, those Apollonian months are speckled with Thanksgiving break, Spring break and Christmas break, although I’ve often found those breaks are possessed by an unusual, forced feeling. As a teacher, only the most careful of planning can keep those breaks from coming in media res.

The school calendar is not a total wash, though, and presents time in a bifurcated way. The intellectual, laborious part of the year is an extended whole, and then, so is the reprieve from that labor. In this way, the school year is a little like life itself, and summer like the life to come. For those who work diligently during the school year, the summer is restful, and for many who fail to work diligently throughout the year, the summer is disappointing and fraught with aggravating repayments.

1. Just as the end of a man’s life is more significant than the beginning, so the end of the year is more significant than the beginning. “The end of a matter is better than its beginning, and patience is better than pride,” Solomon teaches in Ecclesiastes, and several patristic commentators suggest the claim owes to the idea that the telos of a thing is revealed in its “end.” While the manner in which a teacher introduces the year is of profound importance to the way students interpret all that they will undergo, an overly lenient conclusion to the year suggests that, after all the façade-like formality of the school year has been stripped away, what lies beneath is Trivial Pursuit, four-on-a-couch, hangman and “study periods,” the latter of which are often nothing more than thinly veiled mutual intrigues wherein students flirt and chat, and the teacher catches up on grading. Regardless of the importance of beginning the year right, do a survey of your students, and you will find they remember the end of the year far more acutely than the beginning. Why? Most teachers begin their school years with sad, senseless formality. The syllabus, the honor code, the locker assignments. The year begins with red tape. Nothing to really capture the imagination. The end of the year tends to be different, though. The teacher is exhausted. The bureaucratic demands of the administration are heaviest at the close of the year, and teachers are more tempted to cave in to terrible requests to waste time.

I have found that “study periods” are of limited value, and that for all the talk of community and charity, a room full of teenagers giddy for the awful freedom which will soon be theirs, precious little intellection takes place. Limiting “study periods” to no more than an hour a week in class is essential, and for all else, grant the students a genuine reprieve from their labors with creative encouragement. When the last two weeks of the school year role around, I break out the Jorge Borges stories (particularly his collection The Maker), the Italo Calvino stories (Cosmicomics or Invisible Cities), the Umberto Eco essays (“A Dream” comes to mind), favorites from The Devil and Pierre Gernet (like “The House of Apollo” or “The Other,” both of which reduce me to tears) that don’t have an easy place in the curriculum, or J.S. Foer’s “The Sixth Borough.”

2. I like to take these stories, and their wildness, as an opportunity to talk about the nature of summer break. There is a reason that the most intellectual movies of the year are released in November, and that the least intellectual movies are released in June and July. In the hot summer months in America, the brain shuts off. The Dionysian takes over. I willingly condescend to this. I don’t like to bust out my Led Zepplin records until it’s in the high 80s.

Summer is a time for the body. It’s hot. You wear less. You walk the mall, and it’s a carnivale (a “lifting up of flesh”). In the Winter, everyone covers up, but in the Summer, the tattoos and tank tops come out, and the beach and it’s libertine temptations. Those final moments of blasting St. Matthew’s Passion on the way home from school before Good Friday are overwhelmed by the need for a secular-mystical, and it’s really only when you’re hot and sweaty and tempted that “If it keeps on raining/ the levee’s going to break” really makes any sense whatsoever. In November, you get 12 Years a Slave and Gravity. In June, you get slinky models helping alien robots destroy Chicago. In 3-D. In the Winter, you stay inside and cook savory pies. In the Summer, you are far more the pagan priest, cutting apart the flesh of animals and slapping that flesh on sizzling coals as the sun deluges the world in sweat. Man has never been at his best in the summer. Do a side by side comparison of books and movies with the word “winter” in the title as opposed to the word “summer.” When I think of all the times my life has begun to fall apart, they are never in cold weather, which encourages contemplation and isolation. The winter makes monks of aesthetes. The summer, on the other hand, is a dangerous liberty.

I find it valuable to describe for students the particular difficulties of summer living. Students respond best to particular recommendations for reading and viewing; telling an entire class that this or that movie or book is “a good one for the summer” is often meaningless. This means you need to bring in your own personal collection and pass it out. Students also respond strongly to personal advice, by which I mean the teacher directly handing a book to the student and saying, “I think this book is right for you this summer.” Nobody ever did this for me in high school. I find 9 of 10 books I personally select for students, then personally deliver my own copy, get read and returned and excitedly so. The end of the year must be personal, not vapidly general and non-particular.

I also suggest playing into the sensuality of the Summer. For Summer viewing, I encourage the most mythic, the most bizarre, though certainly nothing of Transformers 3 levels of sensual bombardment. I have historically commended Vertigo, Night of the Hunter, La Jetee, For All Mankind, Strangers on a Train, Shadow of a Doubt, The Birds, The Seven Year Itch, Ace in the Hole… For Summer reading, the aforementioned Borges and Calvino, but students are also more open to the mild mysticism of, say, Thomas Merton. For the summer, the more outré, the better. Augustine’s Confessions won’t do. Try Ovid, instead. Put a copy of David Bowie’s “Heroes” into someone’s hand and say, “This is way better than that rap you listen to year in and year out. This record is madness. Perfect for summer.”

But what is key is that information alone has not been traded. A book has been loaned. A tape has been loaned. It is expected back in the fall, with an explanation. It is personal. The student will watch it, will read it.

3. To properly speak to the eschatological convictions of Christianity, the end of the year really ought be fraught with a kind of liberality and generosity of spirit on the part of the teacher which is barely touched on earlier. The end of the year is the time during which to lavish your best on your students. I mean gifts, but I also mean a kind of frankness and camaraderie which, earlier in the year, might endanger the appropriate and austere distance in the teacher-student relationship. During the last two weeks of the year, I become far more lax about the kind of personal information and personal opinions I feel comfortable offering.

If the end of the year is suggestive of the eschaton, there ought to be something a little surprising about how personally the year culminates. Having your classes into your home is a fine way of accomplishing this, feeding them yourself, dishing up the food yourself. Avoid presenting this as “a class party,” which you’ve certainly attended before. It is not this, but an invitation to dinner at your house.

If you have some surplus of money with which to benefit your students, the final days of the year are that time. Whatever happens at the end is rarely seen as a betrayal of what has come before, but the true essence of what has come before. What happens at the end has been always on the verge of breaking through during the long haul, and when the long haul is closing out, layers are pealed back and something essential is understood.

I once invited students to my room “after the final bell has rung for the year” and nearly the whole secondary came to hear me perform “Pioneers! O Pioneers!” while playing Aaron Copland’s “Fanfare for the Common Man.” I was six verses in and everyone was yelling back “O Pioneers!” at every verse. When that was done, I said, “You are now fit to receive the summer.” If Matthew 25 is to be trusted, our entrance into the Final Things is dramatized, ritualized. If your ending to the school year is not, something of the eschaton will fail to register in the imagination of students.

The end of the year can be a time when students are uniquely open to learn, and in sensual and mysterious ways which don’t open up earlier in the year. Make the most of it.