Becoming A Good Father In A Sentimental Age 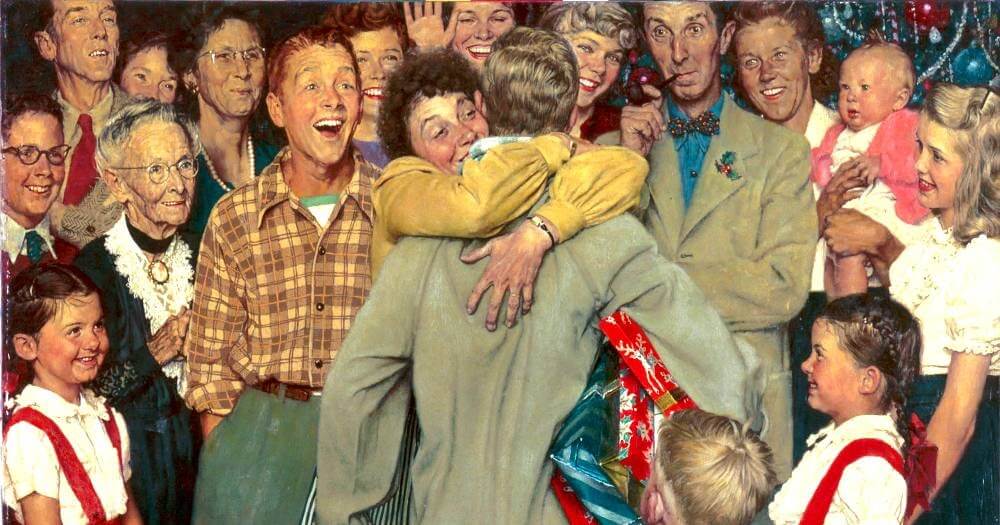 I turn 40 today. I have prepared for this event over the last week by driving three thousand miles across the country and listening to Pride & Prejudice (alas, real psychological insights into human personhood were genuinely possible before the invention of psychoanalysis). Of all the noteworthy, insightful characters in the book which might capture the reader’s imagination, this time through the book it is the wretched rector Mr. Collins who has me on hooks. A man on the verge of 40 has a lot to learn from Mr. Collins.

For those unacquainted with the story, Mr. Collins is a provincial priest whose salary is paid by a rich old bat whom Collins flatters and adores. Collins is aptly diagnosed by the novel’s heroine as “a conceited, pompous, narrow-minded, silly man,” and to this, I would add that Collins lacks any sense of self-awareness whatsoever. He thinks himself a blessing to others, though he is a burden. He regards himself humble, though he is politely arrogant. Simply put, he doesn’t know how he comes off.

What fascinates and worries me about the character is the simple fact that no one tells Collins he is conceited, pompous, narrow-minded, and silly. Rather, everyone simply thinks it, knows it, and feels it deeply.

In mulling Collins over for the last several days, I have come (once again) to a rather sobering thesis: I might be a lousy father. It is a thesis which follows inevitably from two rather simple facts, both easily proved by an honest, unsentimental assessment of the world. First, lousy fathers exist. Second, lousy fathers are unlikely to be told, “You’re a lousy father.” If you are a lousy father, you have to figure it out on your own.

Of course, if a man abuses his children, the cops who arrest him might say, “You are a lousy father,” but I don’t believe that anything less than criminal abuse makes a father good. That would be an horrifically low standard. Likewise, what makes Mr. Collins a lousy priest is not that he abuses his parishioners, but that he is pompous, conceited, and so forth. A lousy father is one who sets his children up for unhappy, unproductive, impious, or wildly discontented lives—and he sets them up for such lives in ten thousand ways, from not offering them effective discipline (the unpleasant sort which teaches genuine self-awareness) to being indifferent toward their tastes, hobbies, and loves.

If you consider all the fathers that you presently know or have ever known, you must judge some better than others. The “examined life” must involve regularly considering what goodness means for someone in your station. A baker should know who the greatest baker is, and who is the most overrated baker, and who is the worst. Every teacher should determine who the greatest teacher he’s ever had is, and who is the worst. Likewise, a father should not uncritically reproduce everything about his own father’s character. He should imitate only that which is worthy of imitation. In the same way a good baker pays attention to better bakers and learns, a good father should pay attention to all the fathers he knows and pattern his own life after the fathers he deems excellent—whose children are contented, productive, pious, and virtuous. Of course, in determining which fathers are worthy of imitation, a man cannot help concluding that certain fathers are not worthy of imitation at all.

We have to wonder about these sub-par fathers, though. We must wonder whether the sub-par fathers of the world know they are sub-par. How would they, though? I mean, I’m not going to tell them. As you can see, I have my own sins to look after.

If a certain man is a terrible baker, his bakery will fail. If another man is a terrible lawyer, his practice will fail. And if still another is a terrible dentist, his patients will go elsewhere. However, if a father is setting his children up for unhappy, impious lives, there is no economic catastrophe that will intervene (at the age of 11, say) and prove to him he is doing his job badly. Think of all the times you have watched other parents make miserable decisions for their children and reluctantly said nothing because, “They know their children better than I do,” or, “It is not my place,” or, “Other people have different standards,” or some other specious excuse when, in fact, you see a rather clear line from the scene unfolding before you and adult misery for their children twenty years down the line. Consider, then, the sheer volume of cautions and rebukes that others have barely refrained from saying to you, as well. They are too embarrassed. They are counting on you figuring it out for yourself.

We like to think our friends would tell us (and so we comfort ourselves with their silence), but of all the delusions American Christians maintain about friendship, the most notable is our confidence that our friends are honest with us and will keep us in line. My students repeat these cliches with regularity when the subject of friendship comes up, and yet they also admit they are too ashamed to accuse or confront their friends over their sins. In fact, the people who despise me or stress me out are far more likely to inspire me to introspection. When it comes to friendship, it is one thing to quote Augustine or Cicero on the subject, and to treat friendship in the abstract as a kind of ideal, but it is another thing to admit that modern beliefs about privacy and autonomy—not to mention our overwhelming sentimentality, which forbids us from asking anything or saying anything that would cause anyone pain or embarrassment—has dramatically affected our friendships. In truth, a father must be willing to critique himself regularly and severely. He cannot even trust his best friends for a bracing critique.

He can hardly trust strangers for bracing critiques either, given the American appetite for clickbait flattery. We love an article about how hard it is to be a father. We love assurances from complete strangers that we are doing very well. However, a good father must acknowledge that the world offers many enticing excuses for being a mediocre father. American Christians have created an endless supply of banal platitudes about grace which prevent a man from robustly evaluating his own performance as a father. A good father must ask himself where all the unhappy adults in the world come from and not let himself off the hook with, “God will make up for all the places I fail as a father.” I see. That must be why everyone in the whole world is equally happy. But this is not faith, but moral nihilism. A man can talk about trusting God all he wants—if he doesn’t discipline his children and spend enough time with them, everybody knows what will become of them. A good father must set the standard for being a good father very high, even though his pride will suffer to do so. If he sets the standard low, it is his children that will suffer.

I should add that it is entirely unfair (and really quite pointless) for anyone to read this article and begin polling his friends, “Do you think I’m a good father?” Neither is it a fitting question to ask one’s wife or one’s children. It is not their place to suddenly enumerate all your sins, contrast your sins with your relative merits, and objectively pronounce you “good.” Rather, this is a journey you must make alone. It is an invitation for God Himself to enter your heart, mind, and soul and help you judge yourself rightly and “not think more highly of yourself than you ought.”

It is right that Father’s Day is a holiday. It is right to honor our earthly fathers and our spiritual fathers. And yet, a good father should remind himself from time to time that no one tells the Mr. Collinses of the world they are conceited and pompous. The Mr. Collinses of the world must discern this truth all on their own. The most fitting thing a father can do when Father’s Day rolls around is to humbly accept whatever praise he is offered from his children, even if he thinks himself unworthy, for “A refusal of praise is a demand to be praised twice.” A father should also resist the siren’s song of inspirational blog articles and podcasts about how hard dads have it, and spend enough time taking stock of his own soul that genuine repentance is possible. The happiness of any family depends on a father who is willing and able to repent deeply.