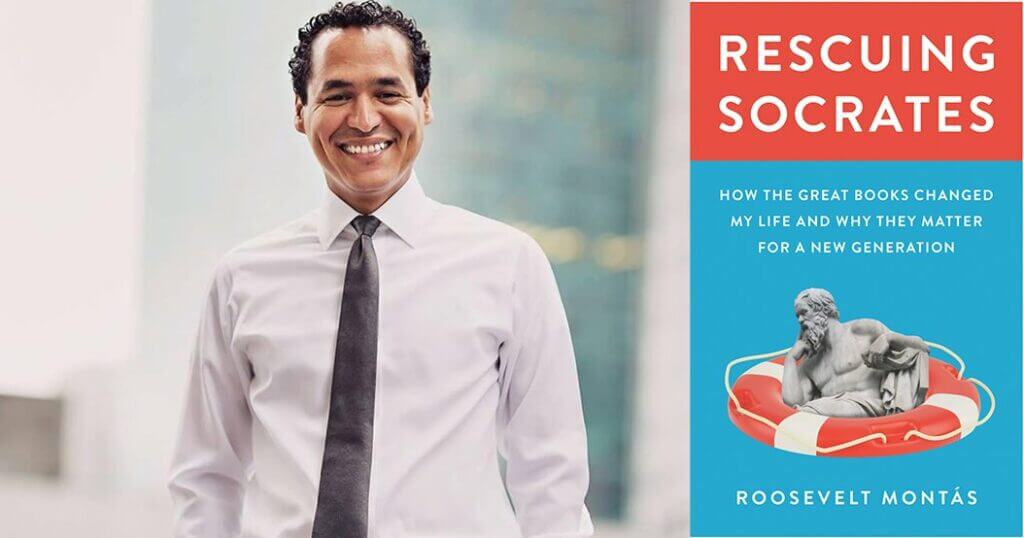 This is the premise of Roosevelt Montás’ new book, Rescuing Socrates: How the Great Books Changed My Life and Why They Matter for a New Generation. As he puts it, Liberal education is “the common education for all—not instead of a more practical education but as its prerequisite” (224). What intrigues me about the book is emphasis on rescuing. The book is titled such that it evokes the image that it is attempting to save Socrates, et al from being discarded as too white, too western, too old, too antiquated, too male, too unrefined, or too one-sided. However, as it is often expressed by pet lovers, “My rescue pet rescued me,” so too is the book offering the same reverse emphasis. Inasmuch as Montás’ book is attempting to rescue Socrates, it is rescuing Socrates that he might rescue us. And here is where the argument is especially poignant, beginning with how it orders the argument.

The book itself is a memoir, a narrative sharing depictions of Montás’ life as it has been formed and informed by his readings, his family and friends, his surroundings—and changes in them. He presents these stories alongside the readings and authors that helped him to make sense of them. Thus, it begins with readings from St. Augustine as Montás seeks to know himself. Then, it moves to readings from Socrates (Plato) and Aristotle as he seeks to examine life. It proceeds to readings from Freud as he seeks to know his inner self, his unconscious. Finally, he ends with readings from Ghandi (and Nietzche) as he seeks to understand Truth and God. It is an ending with respect to the readings and his narrative, though the book continues with an epilogue describing the program at Columbia, where he teaches, and how it works there. As his story unfolds, illuminated by his readings in these different and varied authors, he shows, rather than tells, why the great books and their authors need to be saved—because they, in some way or to some extent, saved him—if for no other reason than that they helped him make sense out of life in this world. Again, this is where the argument becomes poignant, and one particular paragraph in the book really brings this to light.

At Columbia, students are conscious of being in the top echelon of a vicious ladder of competition and prestige, but many of them seem to be grappling with the realization that such achievements don’t satisfy their longing for meaning. Rather than the entitled and fragile “snowflakes” some observers have described, I find my classroom populated with young people of real depth and earnestness who, like me at their age, are racked with existential anxiety and are struggling with the threat of meaninglessness. They are obsessed with moral questions and wonder whether the frantic pursuit of success, wealth, and status will actually satisfy their deepest thirst. Socrates’s words speak directly to students who go to college looking for a way to ground not just their careers, but their lives. (87)

Boomers mock snowflakes; snowflakes mock boomers. Everybody else is wrong; me and my generation got it right. What Montás realizes, that so many have forgotten, is that we either are going through the struggle of existential anxiety and potential meaninglessness (as those who came before us did), or we went through the very same struggle that young people are going through today. The world is a large, ever-changing, threatening place, especially when it is strange and doesn’t “make sense.” When we can make sense of it all, understand its “rules” and how to succeed in it, when we can have some sense of how to pursue “the Good,” it becomes less large, less change oriented, less threatening. This is the kind of existential understanding and meaning that every generation has sought, including the current. The biggest difference, if there is one, is that the further one goes back, generationally, the more accepted the great books and their authors were as a means to provide some of that understanding and meaning. Older generations had the same anxiety and struggle, but they also had—in large part—the means to answer the questions. The current generation lives through the same existential anxiety and struggle with meaninglessness, but it does not have access to the same answers—in some cases because they have abandoned them as archaic and prejudiced, and in other cases because they have been taken away from them.

Herein lies another particularly poignant point by Montás. A liberal education doesn’t give answers by way of giving “answers.” Any one particular author might provide an “answer” to the meaning of life, or to the pursuit of “the Good life” or happiness, or to existential understanding, but the whole of the tradition gives an “answer” by giving us the means to pursue understanding for ourselves. Montás describes it this way: “It is an integrated tradition, it is by no means a monolithic tradition—in fact, one of its hallmarks is its internal contentiousness” (212). So while Socrates or Aristotle, Dante or Boethius, Freud or Jung, Nietzche or Ghandi, might provide a particular answer that they found to be helpful, it is the questions themselves that they pursue, the ways that they pursued them, and the varied contributions that they have each offered—and how they all work or don’t work together—that give the reader today the means by which, the answers by which, they might find existential understanding and meaning in the world they live in.

Roosevelt Montás’ Rescuing Socrates is an important book because it reveals, through a touching and honest narrative—in the vein of St. Augustine’s Confessions, the need to not forego Socrates and the great books lest by failing to rescue them we fail to find the means to rescue ourselves.