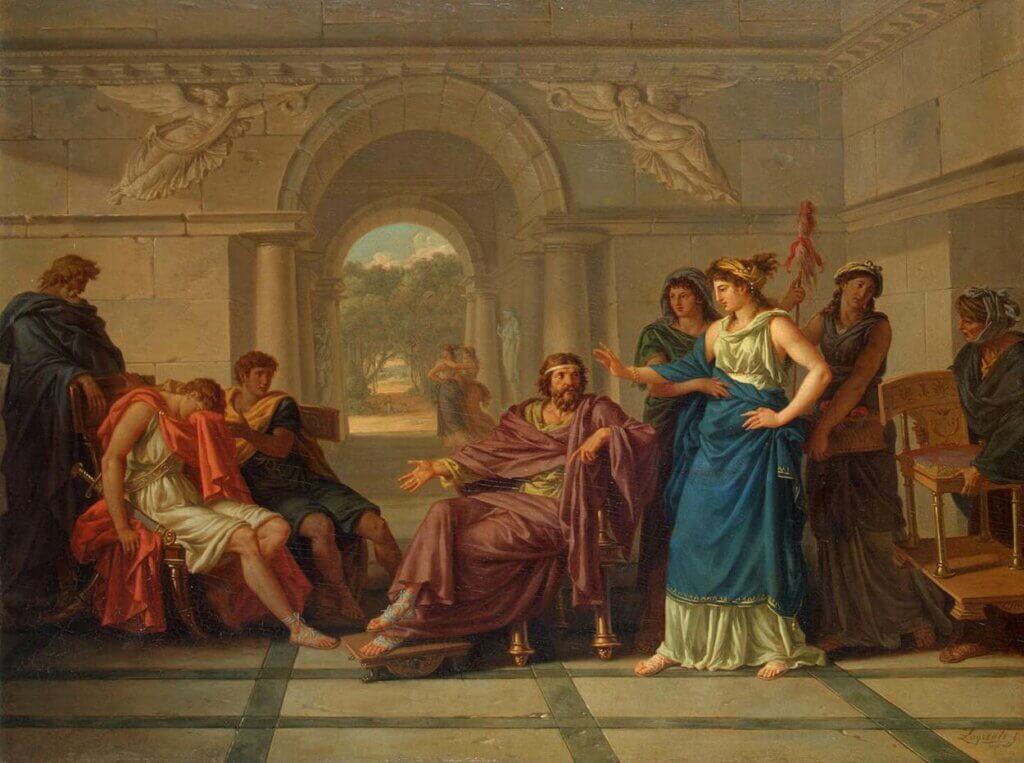 Many of our most beloved books and stories reveal what Dr. Eva Brann aptly calls “a trip towards . . . identity.”

Consider: The Adventures of Huckleberry Finn, David Copperfield, Treasure Island, Candide, Jane Eyre, Great Expectations, To Kill a Mockingbird, The Catcher in the Rye, and The Voyage of the Dawn Treader, to name just a few, are all prime examples. And these don’t count the myriad unwritten tales that were passed down through oral tradition and local legend.

Sometimes this kind of story is referred to as a “bildungsroman”, a German word which refers to a novel of formation. It focuses on the growth (especially psychological) and transformation of an individual character who is forced to overcome some series of trials, thereby emerging a more “adult” and “individual” human being. A more complete person, if you will.

Here in book two of The Odyssey we have the beginnings of such a process. These first four books are often referred to as the “Telemachy” because they detail Telemachus’s own journey away from – and back – home. The Odyssey is a story of home-coming, but it is also tale of the coming of age of our hero’s son.

In any tale of this sort there’s an instigating moment. Some event, or sequence of events, that force a young character into action and demand that he re-think the way he has viewed the world. Consider, for example, Eustace Clarence Scrubb in CS Lewis’s great Voyage of the Dawn Treader, my favorite book in the Narnia series. His instigating moment, if there is only one, is when he becomes a dragon. For Telemachus that instigating moment comes in book when Athena visits him and generates within him the courage to act on his frustrations and overcome his fear. When book one ends, Telemachus falls asleep pondering the counsel of the goddess.

Now in book two we see him begin to act. He takes her advice and plots out a journey for information about his long lost father. Then he finally speaks up, boldly demanding that his mother’s suitors depart while declaring that their activities are “beyond all decency”. This is great, of course. Good for him. He’s finally becoming a man, it seems, and taking hold of his property and house.

This is progress for Telemachus, it’s a first step. But it’s interesting how little the suitors take him seriously. Despite his bold words they talk to him like a child. And it’s not until Mentor and Halitherses speak on his behalf that the suitors agree to Telemachus plan and to head home while Telemachus seeks news of his father’s welfare.

Contrast this with Odysseus, who is known, of course, for his mesmerizing and cunning way with words and not just his physical prowess and courageous temperament. We don’t think of him so much for the number of Trojan warriors he took down so much as for his guile and creativity.

It’s probably unfair, but throughout book two young Telemachus is compared to his brilliant father. I counted at least three times that he’s referred to as “dear son of Odysseus”, including in the book’s second line, and we are persistently reminded whose house Telemachus – and the suitors – are living in and fighting for. Poor Telemachus has a lot to live up to, as Athena tells him when he challenges him:

“Telemachus you are to be no thoughtless man, no coward, if truly the strong force of your father is instilled in you; such a man he was for accomplishing word and action.”

She then says this to him, since she was hoping to encourage him and all: “. . . few are the children who turn out the equals of their fathers, and the greater numbers are worse; few are better than their father is.”

You’re not there yet, kid, but you got some good blood in you so you have a shot. If you weren’t his son you’d be in big trouble.

I’m sure Telemachus was rip roaring and ready to go after that speech. But, fact is, she’s telling the truth and that’s why the Telemachy is so important. If Odysseus is going to make it home and successfully fend off the suitors then Telemachus must be ready to help him. And before he can be ready he must endure the kind of trials that transform a boy into a man. So the restoration of their home depends not just on the homecoming – the nostos – of our hero, but also on the internal and personal growth of his son.

This seems to be the story of history. A home, a name, a country, a culture, a way of life, can last only as long as the children are prepared to defend it.

As a relatively new parent of young boys this is both challenging and terrifying. I suppose I can only hope that I am as worth imitating as Odysseus.