What I’m Reading: The Odyssey, Book One 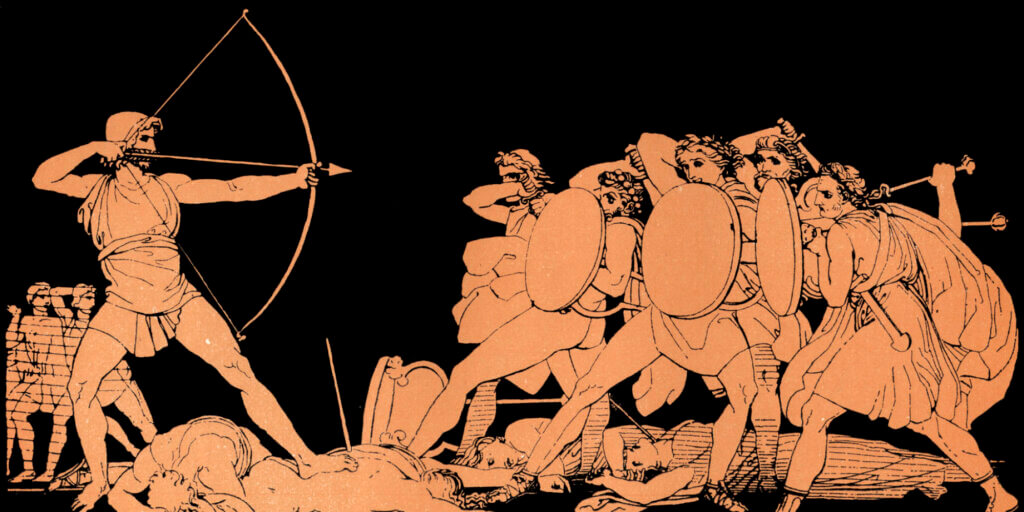 In the forward to her book, Homeric Moments: Clues to Delight in Reading the Odyssey, Eva Brann wrote that “reading Homer’s poems is one of the purest, most inexhaustible pleasures life has to offer – a secret somewhat too well kept in our time.” If this is true, and I suspect that it is, then I’m going to be one of the happiest people on earth this fall.

It’s been too long since last I read any of Homer’s epic poems and so I aim to remedy that in the coming months. As the weather turns cool here in NC and the vapid humidity gives way to the crispness of autumn I’ll be journeying with “the man of many ways” – and writing about the experience along the way.

My plan is to read and write about one book of The Odyssey per week (I’ll be reading primarily Lattimore’s translation). I don’t intend to analyze as I go. I don’t plan to bring any kind of scientific approach to the story. I simply hope to attend to what the book is – and has to say – as best as I can and then to reflect on my experience reading it. I suppose I might delve into the world of literary analysis from time to time, mostly because I likely won’t be able to avoid it. But I primarily want to discover some of that “inexhaustible pleasure” our friend Dr. Brann talks about. As she writes in a later chapter to Homeric Moments, “The Odyssey more reliably rewards the noticing attention, and noticing is the working mode of trustful reading.”

I’d be honored to have you along for the ride, if you’re up for it. I suspect a few of you are teaching The Odyssey this fall and I would love to hear from you; to learn what you’re discovering as you read and teach. To find out what joy you’re finding in it.

I discovered when I read and re-read book one this week that the invocation to The Odyssey makes for one of the greatest paragraphs in all of literature. In just 10 lines it lays out all of the themes of the book, as any good invocation does; but what is fascinating to me is how it does it. In those 10 lines are 8 adjectives. Here they are:

So seven of the eight adjectives refer to the difficult and lengthy nature of Odysseus’s journey. And the one adjective that doesn’t – sacred – implicitly speaks to the tragic origin of that journey, calling to mind the bloodshed of the Trojan War, the lives lost at the gates of that great city, and perhaps even cunning Odysseus’s own involvement in it’s fall. But, this invocation suggests, whatever happened to the rest of his comrades after the war, Odysseus story was just getting started on the night they wheeled the trojan horse into the streets of the city. He was doomed to see many cities, to suffer greatly, both in body and spirit “on the wide sea”, and to watch his “wild” comrades fall by their own recklessness, which even he, wise though he was, couldn’t minimize enough to save them.

Truth is, there’s a deep sense of hopelessness that pervades much of book one. From the invocation to Telemachus’ despair, the tone is sorrowful. But it doesn’t end that way. In Telemachus we find the seeds of a hero, perhaps even a shadowy imitation of his father. He’s hospitable and humble, cunning in the way he speaks, and remarkably receptive “in his heart” to a disguised Athena, who brings him counsel and prophecy. There’s a sensitivity in him, if you will, that mirrors the character found in his father. What remains to be seen, however, is whether Odysseus’s boldness and courage will show itself in his son.

This is the first time I’ve read The Odyssey since my kids have been born and I’m finding that changes everything about the experience. It’s less abstract, somehow, to read about Odysseus time away from home – and desire to return – when I think of my own wife and children waiting for me when I’m away on a somewhat lengthy trip. I think of the FaceTime calls we’re able to have and the pictures my wife sends me of the boys playing together or making faces at the camera and the way I anticipate my homecoming. I think of the way I anticipate sleeping in my own bed and cooking in my own kitchen and sitting on the edge of my son’s bed as he goes to sleep. And I imagine saying goodbye to two boys under three only to discover that by the time I finally return they’ve become men. I wonder if the greatest tragedy in The Odyssey is not what happens to Odysseus while he’s on his journey but in what that journey caused him to miss at home.

After all, the English word “nostalgia” is actually a Homeric word that refers to the ache – or longing – for home. We may not all fight a cyclops or get kidnapped by a lascivious goddess, but we can all identify with the ache to be with those we love.

What do you love about Book One?