The Transcendent Art of Language: A Tale

Wright has constructed this tale as an example of classical rhetoric—the tools, their use in context, and their definitions. These definitions are a brief reminder or a quick introduction to some of the main devices of Homer, Aristotle, and Cicero. 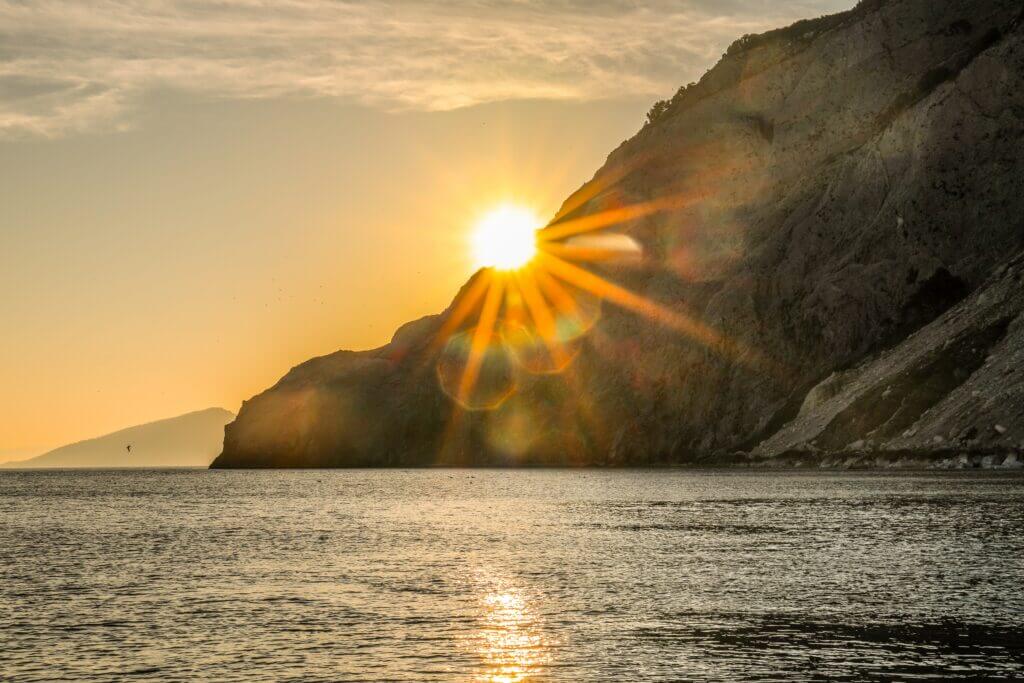 “How can I more precisely express truth and beauty in my writing?” asked the young traveler, sitting by the rocky entrance of a cave, high on the east side of Mount Athos (prosopopoeia).

Prosopopoeia – A figure of speech in which a deceased, imaginary, or absent person is represented as speaking.

“It is most helpful to consider the wordplay and uses of language in the Psalms, the Greco-Roman epics, the tragedies, dramas, and the great classics of literature and poetry through the ages,” replied the winsome, wise sage (alliteration). “Literary and rhetorical devices help convey the rhythm of Homer, the transcendence of Shakespeare, the language of paradise,” (auxesis; hyperbole; parallelism) he added with a warm, gentle smile that seemed to summon the warm, gentle beam (repetition) of sunlight that floated and danced and gamboled (polysyndeton) contentedly (personification) over the craggy, granite precipice—a beam resplendent in its own photonic purpose: an empyrean emissary, a genius loci (metaphor; asyndeton).

Alliteration – The repetition of similar consonant sounds in words close to each other.
Auxesis – A figure that advances from less to greater by arranging words, phrases, or clauses in a sequence of increasing force or intensity (a kind of climax, incrementum, or amplification).
Hyperbole – Deliberate exaggeration used for effect and to make a point.
Parallelism – Similarity of structure or grammatical form in a pair or series of words, phrases, or clauses.
Repetition – The repetition of words, phrases, or ideas to add emphasis.
Polysyndeton – The use of several conjunctions (and, but, or, etc.) repeated in close proximity.
Personification – A figure of speech that gives human qualities to animals, inanimate objects, or ideas.
Metaphor – A direct, implicit comparison between two unlike things (does not use like, as, or than). The metaphor helps something less known be better understood through a comparison to something known.
Asyndeton – the omitting of one or several conjunctions in a series of words, phrases, or clauses to create a hurried rhythm or to add emphasis.

With a rising awareness (epiphany) of the arts of language, the fecundity of style and sense, the young Protagonist (epithet) glimpsed the adumbration of his own rising action (antanaclasis), the internal conflict in the plot of his unfolding story, a bildungsroman that began with the simple facts of his exposition, and developed into the complexities of his dramatic situation. What will be the highest moment (climax) in the novel of his life? What crises must he endure on his journey from innocence to experience? What choices will he make in the paradox of desire for experience, and freedom from experience? (anaphora; epistrophe; suspense)

Epiphany – A moment of insight, discovery, or revelation.
Epithet – An adjective or brief phrase used to characterize a person, place, or thing, summarizing its most essential quality.
Antanaclasis – A figure in which a repeating a word shifts from one of its meanings to another.
Bildungsroman – German for “novel of formation”; the subject of this novel is the development of the protagonist’s mind and character in the passage from adulthood through varied experiences, often including a spiritual crisis, into maturity.
Exposition – The opening portion of a narrative where the author introduces the setting, characters, tone, and other important facts for understanding the story.
Dramatic situation – When a character or characters are involved in a conflict.
Climax – The moment of highest and greatest tension in the story.
Paradox – From the Greek para, “past, contrary to,” and doxa, “opinion”; a statement that is self-contradictory on the surface, yet seems to evoke a truth nonetheless.
Anaphora – The repetition of a word or words at the beginning of two or more successive lines, phrases, or clauses.
Epistrophe – The repetition of a word or group of words at the end of two or more phrases, clauses, or lines.
Suspense – Anxiety created by the writer to make the reader wonder what will happen next.

With these questions in mind, the young traveler, seeking the surfeit of being, the abundance of love, the consistency of pure reason, struggled within and toward his new understanding like an amaryllis bulb bursting forth in a spectrum of color (simile; imagery). After all, he was here, high on a jagged mountain in Greece, dizzy from days of fasting and hiking, feeling the whirling gusts of wind (anemographia) while breathing the pure air of enlightenment, pursuing something above and beyond himself, leaving culture, technology, “progress,” and fear behind in a Homeric and Socratic quest to discover the meaning of existence, to penetrate the veil of Isis (allusion)—to live the examined life.

Simile – The comparison of two unlike things with the use of like, as, or than; shows that something unknown can be understood because it is similar to something known.
Imagery – The collection of images in a literary work or poem.
Anemographia – A realistic, vivid description of the wind.
Allusion – A brief (and sometimes indirect) reference in a text to a person, place, or thing—fictitious or actual.

Early the next morning, realizing that the mysteries of being and truth exist, in part, in the abnegation of comfort, the young traveler arose at 5 am, awakened by the sonorous chanting of monks in the recurring motif of daily matins, and by the sounds of other monks at work, digging and planting, seeding the garden for the morning sun’s radiant élan vital (mood; tone).

“O wide, vast, and varied world,” (apostrophe; alliteration) he thought, gazing over the expansive valley below, bursting with splashes of violet and thrumming with cicadas (onomatopoeia; imagery). Though he could not foresee the dénouement of his life, or its final resolution, the ascetic struggles of the young traveler over many hours and days culminated in a kind of peripeteia, illuminated by anagnorisis—a vision of rare clarity: The literary and rhetorical arts remain so variable, so aesthetic, and so generative (mesodiplosis), they imbue the numinous fabric of reality with meaning, initiating the glorious union of time, being, language, and creation. As the sun rose with a flush of orange over the azure Mediterranean (enargia), a few lines from As You Like It passed through his mind:

And this our life, exempt from public haunt,

Finds tongues in trees, books in the running brooks,

Sermons in stones, and good in everything.

Apostrophe – A figure of speech in which a speaker directly addresses a person, thing, or idea who is absent or dead. The apostrophe often begins with the exclamation “O” or “Oh.”
Onomatopoeia – The use of words whose sound suggests their meaning (e.g., zip, bang, buzz, hiss).
Dénouement (dey-noo-mahn) – Another word for the “falling action” of a story. It literally means “the untying of a knot” and refers to the section of the plot after the climax when the problems faced by the characters begin to be resolved.
Resolution (also called conclusion) – The end of a unified plot.
Peripeteia – In Aristotle’s Poetics, the reversal from one state of affairs to the opposite. Some event or events in the plot effect a reversal and the hero’s fortune suddenly changes. The reversal is often accompanied by anagnorisis, the change from ignorance to understanding. This discovery or recognition delivers love and joy to a character who learns of his good fortune, or hatred and pain to a character who learns about his misfortune.
Anagnorisis – In Aristotle’s Poetics, when a character undergoes a change from ignorance to understanding after the peripeteia, a reversal from one state of affairs to the opposite.
Mesodiplosis – The repetition of the same word or words in the middle of successive sentences or clauses.
Enargia – From the Greek for “visible, palpable, manifest”: a lively, vivid description of something or someone.
Synaesthesia – A description of two or more sensory experiences (like sight and sound) through one of the five senses. For example, describing a sound with a color (sight): “the blue lapping of the waves”; “the green warble of the finch.” Or, describing a color with a temperature (touch): “cool blue.”

Feeling the silent mountain in the nexus of perception (synaesthesia), the young traveler thanked the weathered sage for all he had taught him—and descended the mountain a wiser man, grateful for the gift of grace, the gift of words, the transcendent art of language.