If we first approach Passion Week with eyes to see, and if we consequently approach the Oresteia with those same eyes, we will be made wise 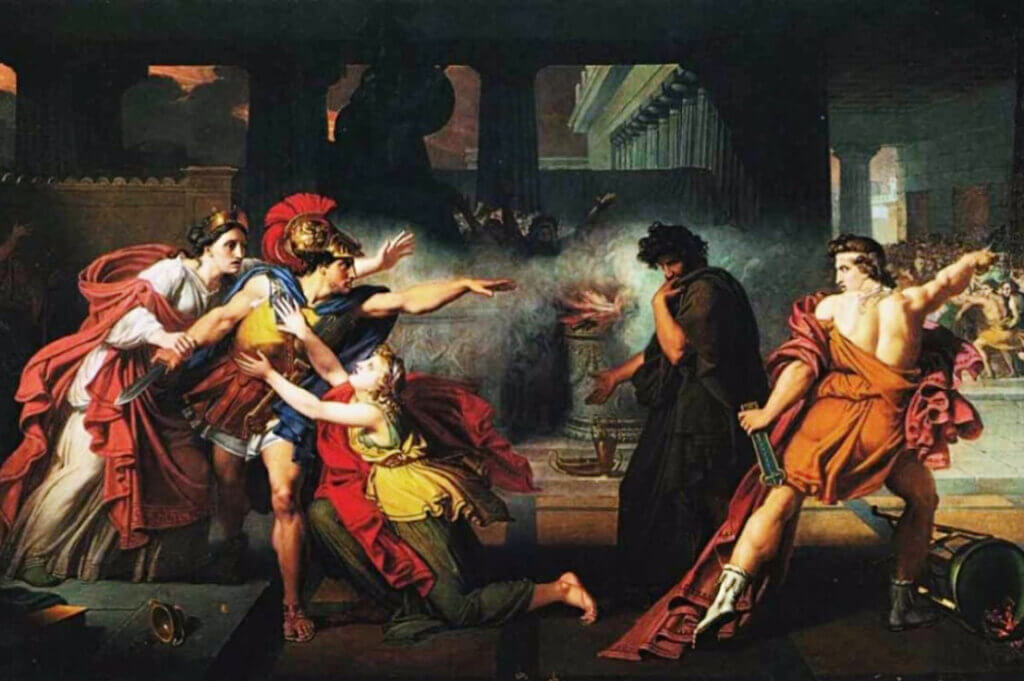 Consider the following passages from the Agamemnon, which might be read in a classroom.

“With gags, her mouth sealed in mute violence.
And then she let fall her cloak of saffron,
And glanced at each face around her
With eyes that dumbly craved compassion;
And like a picture she would but could not speak;
For oft aforetime at home
Her father’s guests, after they had feasted,
Their cups replenished, had sat while with sweet voice she sang
The hymn of thanksgiving, pure and spotless,
Standing beside her father.
The end I saw not. It shall not be told.”

“I stand here, where I struck, over my work.
And it was so contrived, I’ll not deny,
To leave no fissure, no escape from death.
With this vast net, as might be cast for fish,
I sieged him round in the fatal wealth of purple,
And twice I struck him, and with two cries of pain
He stretched his legs; then on his fallen body
I gave the third blow, my drink-offering
To the Zeus of Hell, Deliverer of the dead.
There he lay prostrate, gasping out his soul,
And fourth a sudden spurt of blood
Rained thick these drops of deathly dew upon me,
While I rejoiced like cornfields at the flow
Of heavenly moisture in birth-pangs of the bud.”

“Outrageous!” the Christian minister cries. “How can you put such pagan filth in front of your seventh graders? How can you possibly justify placing such vivid disorder and sin in a school which prides itself on teaching children about Jesus?”

“Welcome to Holy Week,” I say. And then I borrow his Bible and begin reading from Genesis 22:

As the worldwide Church approaches Passion Week, my seventh graders and I approach Aeschylus and his Oresteia. And if we first approach Passion Week with eyes to see, and if we consequently approach the Oresteia with those same eyes, we will be made wise. I wish I had planned to end this week the way I did. I would have felt better about my teaching, about my curricular planning and intentionality as one who seeks to lead his students to the deep truths of Christianity. But what occurred this week was quite unintentional.

I finished the first play, Agamemnon, in Aeschylus’ tragic trilogy Oresteia. And it happened to be Holy Week, the week we consider the passion of Jesus Christ—his arrest, trial, public humiliation, sacrifice, and death. We read how Agamemnon rode into his city, and we contrasted it with how Odysseus arrived in Ithaca. The former arrived in pomp and was cut down. The latter arrived as a humble beggar-king, and his story ends in purification and justice. Jesus rode in on a donkey, not a stallion. He was mocked with a crown of thorns. His story too ends in purification and justice. We read the murderous lines above followed by Clytemnestra’s incessant search to blame shift and then Aegisthus’ cowardly haught as he fights with the old men of the city, the chorus. The old men take up arms because they are the noble ones.

A story like Agamemnon’s is jarring, it is riveting, and it is the kind of thing most Christian schools take out of the library. Not us. Not today. Not ever. Our students need it. They need the truth, no matter how bloody it may be. For if they don’t get it with us, the world will tell them how to deal with sin, how to deal with wrongdoing, and whose blood they need for peace. Our students need the Oresteia, so they can see the Greek gods didn’t provide Agamemnon with a ram. These gods are false, they are neither providential nor Covenantal. Like the world that made them, these gods are ruthless. They conquer by force and make no promises. Manipulate them with sacrifices if you want, or they will do what suits their heavenly agenda.

As Toby Sumpter so elucidates in Blood-bought World, there will be blood; there must be blood. This is what the Oresteia teaches, and this is what we face during Holy Week. Who will be the guilt offering? If we follow Aegisthus and Clytemnestra, the sacrifice will be our neighbor, and by Biblical import then their blood will come upon our own heads. Or we can look to Jesus Christ, the Lamb of God, slain to take away the sins of the world. We can enter a tragedy through our own blood or we can enter a comedy through His. We place tragic stories in front of our students so that they avoid tragic lives, the real kind. We have such a time as Holy Week in the Christian calendar so that we can become holy, the eternal kind.