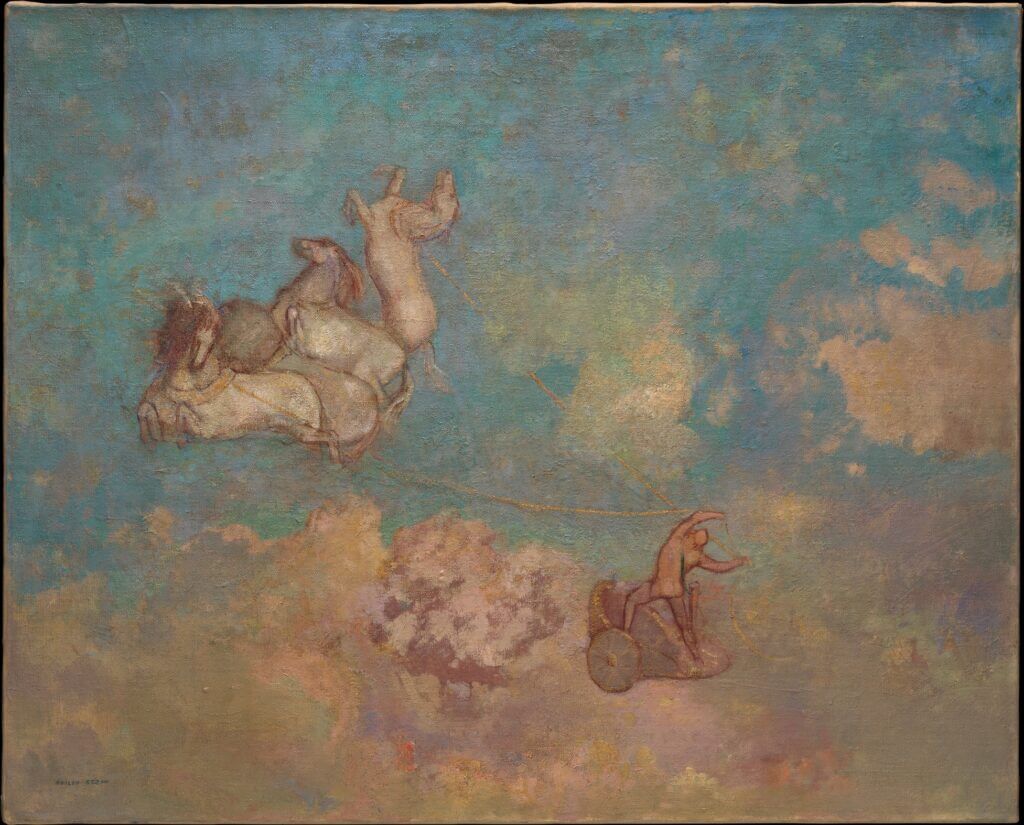 The whiplash while reading wisdom literature like this often leaves one wondering what she ought to do. Do I answer the fool, or don’t I? The answer, of course, is this: It all depends. Sometimes, both happen at the same time.

In Ovid’s Metamorphoses, we get some good samples of folly.

The first is that of Phaethon. Phaethon is the young and foolish son of the nymph Clymene who boasts that his father is the Sun-god and gets called to the carpet by his friends, who, in an ancient Greco-Roman playground taunt, dare him to prove it. So Phaethon goes to his mother, asking her to prove to him that the god really is his father. The boy ends up getting an audience with the Sun-god himself and asks him for proof of his heritage. The Sun-god affirms for Phaethon that, indeed, Phaethon is his offspring, and to prevent him from having any doubt, he will grant Phaethon a favor—any favor at all. He swears this on the river Styx, making an unbreakable vow.

Welp. We never said the gods were wise, did we? This open-ended promise is obviously not a smart move, which is evidenced before the Sun-god can even finish his sentence. One fool begets another, and Phaethon asks to drive his father’s chariot with the winged horses across the sky. This is like your untested teenager asking to drive your fancy car, only much, much worse. Generally, when your teen asks for the keys, the whole world isn’t in danger of dying or catching on fire.

The Earth herself entreats Jove, begging him to make this destruction end, and he does. He sends his lightning bolt, strikes the charioteer, and sends rider, horses, and cart wheeling and careening, scattering a cosmic wreckage through the heavens in order to save the earth. Phaethon, for his folly, loses his very life, and the Sun-god, for his, loses his son.

A second story of folly is that of Midas. While Phaethon’s story takes place over books I and II, the story of Midas is at the other end of Ovid’s premier work. The story of Midas begins further along, in book XI. You’d think everyone in this epic would have had a chance to learn from those who preceded them, but no. That would make too much sense.

King Midas does Bacchus a solid: When Silenus, a member of Bacchus’ party, becomes separated, Midas offers him hospitality on his sojourn and reunites him with Bacchus. Bacchus, like the Sun-god, in his happiness and gratitude, offers Midas anything he wants.

Yes, the gods have learned nothing from each other. Midas, no wiser than Phaethon, asks that everything he touches should turn to gold. Bacchus, knowing and sorry, grants the gift. Midas begins touching everything, testing his newfound glory. Twigs, stones, grains of wheat, apples from trees—they all turn to gold. He will be the richest king alive.

We know the story. He sits down to eat and chokes on his food as it turns to gold the instant it passes his teeth’s barrier. His wine turns to molten gold upon swallowing. He will die, hungry and thirsty, and his riches will not save him.

Midas shows slightly more wisdom—or perhaps just luck—than Phaethon. He has the presence of mind and the ability to beg forgiveness for his foolishness. Midas lifts his hands to heaven and prays, “Forgive me, father. I have sinned. Have mercy upon me, save me from this loss that looks so much like gain!”

Ovid tells us that the gods are kind. Bacchus owns his fault and forgives Midas, takes back the gift, and tells him to go bathe in the stream that flows by Sardis. “There duck your head and body under the foaming white of the fountain and wash your sin away.”

“Wash your sin away,” the god says. Go get baptized, he says. “One baptism for the remission of sins.” Yes, this is familiar territory. Sin is foolish, is it not? Midas does as he is told, and his sin is indeed washed away. He doesn’t truly learn his lesson and ends up with ass’s ears, but that’s a story for another time.

What’s the point here, though? Both Phaethon and Midas were foolish to ask for things beyond their ability and scope of understanding. The gods, also, were fools to make open-ended promises to mortals who lacked wisdom and did not know better how to use such gifts and privileges.

Ovid is giving us a pair of cautionary tales. Yes, let’s not be fools to ask for things beyond what we can handle or understand. But let us also not be the fools who enable other fools and grant that which we cannot—either to our children or to our students. Let’s not make vain attempts to prove our love, our gratitude, our happiness, or our hipness, lest we reveal our own folly.

Let us seek wisdom in dealing with those who depend and rely on us to be wise. We should not make promises on things we cannot deliver, and we should not give ruinous gifts which we know will bring the recipients to destruction. Love demands more from us. We should not always give or get what we want, no matter how eloquently or persuasively we ask or answer.