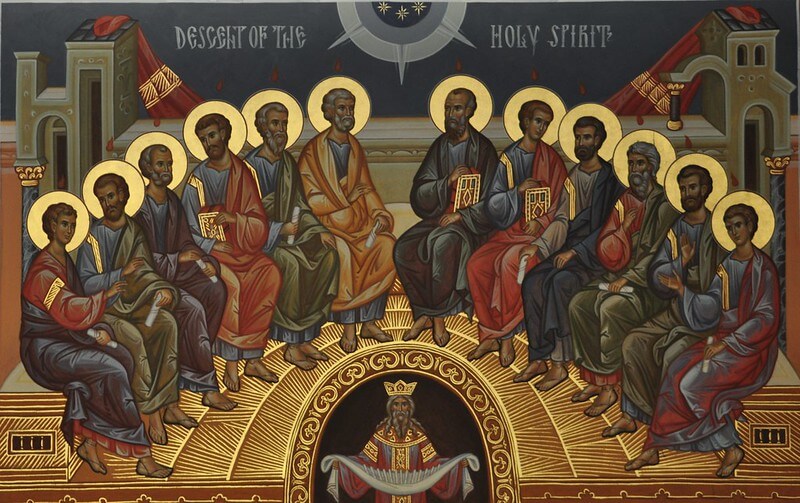 Recently, the Church celebrated the feast of Pentecost, when God fulfilled His promise by giving the gift of the Holy Spirit, who is sent to teach, comfort, and strengthen the Church as we carry out the Lord’s commission (Matthew 28:16-20, Acts 1:8). And, when we see the manner in which God fulfilled that promise, we again hear several echoes and connections with the Old Testament.

“When the day of Pentecost arrived, they were all together in one place. And suddenly there came from heaven a sound like a mighty rushing wind, and it filled the entire house where they were sitting. And divided tongues as of fire appeared to them and rested on each one of them. And they were all filled with the Holy Spirit and began to speak in other tongues as the Spirit gave them utterance” (Acts 2:1-4).

As the Lord did for Job (38:1) and Ezekiel (1:4), He answers out of the wind. The sound of a mighty rushing wind sweeps through the house and “divided tongues as of fire appeared to them and rested on each one of them.” The tongues are divided, not as sign of deception (a “forked tongue”), but because they are going to be able to speak languages that they did not know.

The following verses make that clear: “Now there were dwelling in Jerusalem Jews, devout men from every nation under heaven. And at this sound the multitude came together, and they were bewildered, because each one was hearing them speak in his own language. And they were amazed and astonished, saying, ‘Are not all these who are speaking Galileans? And how is it that we hear, each of us in his own native language? Parthians and Medes and Elamites and residents of Mesopotamia, Judea and Cappadocia, Pontus and Asia, Phrygia and Pamphylia, Egypt and the parts of Libya belonging to Cyrene, and visitors from Rome, both Jews and proselytes, Cretans and Arabians—we hear them telling in our own tongues the mighty works of God” (Acts 2:5-11). These were not “unknown” tongues, but “other” tongues.

Pentecost & the Tower of Babel

The coming of the Holy Spirit at Pentecost is a reversal of the Tower of Babel. Genesis 10 began with the gathering of nations. They gathered in disobedience to God’s command to scatter and fill the earth, and their disobedience resulted in being scattered and having their languages confused.

By contrast, in Acts 2, the nations gathered for Pentecost and, after hearing Peter’s sermon and call to repentance, they believed and obeyed God, and were united and made part of one body, the Church. At Pentecost, God is healing the division of Babel through the proclamation of Christ and the work of the Holy Spirit.

These divided tongues were “of fire.” In Matthew 3:11, John the Baptist said, “I baptize you with water for repentance, but he who is coming after me is mightier than I, whose sandals I am not worthy to carry. He will baptize you with the Holy Spirit and with fire.” (Side note: Compare the baptism of the Holy Spirit in Acts 2 and the baptism of Jesus in Matthew 3. What similarities do you see?)

This is certainly not the first time fire is used in connection with the removal of sin. In fact, it seems that Acts 2 is connected with Isaiah 6. There, the prophet Isaiah sees a vision of the Lord on His throne, high and lifted up, and he heard the angels proclaim, “Holy, holy, holy is the Lord of hosts; the whole earth is full of his glory!” (v. 3). Isaiah’s response to being in the presence of God was awe, to the point of pronouncing a “woe” (sentence of destruction) upon himself – “Woe is me! For I am lost; for I am a man of unclean lips, and I dwell in the midst of a people of unclean lips; for my eyes have seen the King, the Lord of hosts!” (v. 5). One of the seraphim flew to Isaiah and took a burning coal from the altar, placed it on the prophet’s lips, and his guilt was taken away, enabling him to go and speak for the Lord when he was sent.

Going back further, we see Moses encountered the same. When God called him to speak to Pharaoh in God’s name, He appeared to Moses as a Burning Bush. After the Exodus, God led the people in a pillar of cloud by day and fire by night – and when God met with Moses on Mount Sinai, it “was wrapped in smoke because the Lord had descended on it in fire” (Exodus 19:18). Moses went to the fire and God met with him there, and he was enabled to speak for the Lord afterwards. The fire is the presence of God among His people, enabling them and equipping them to speak, to gather before Him, and to serve Him. (Side note: if you have wondered why so many traditions use candles in worship, this is one significant reason.)

The same thing happens at Pentecost, when the tongues of fire appear over the disciples and rest upon them. And once the fire is upon them, they are able to speak when God calls them to do so.

Yet, the sermon at Pentecost has shaky beginnings. I never had to begin a sermon assuring the congregation that I was not drunk. When some of the attendees hear the disciples speaking in their own language, they say, “They are filled with new wine.” Being drunk is unlikely to enable you to speak languages you did not previously know, so Peter dismisses the mockery (vv. 14-15) by clarifying that that is not the case because it was only 9:00am. I’ll leave you all to sort that explanation out.

Peter says this is the work of the Holy Spirit, as Joel prophesied – “And in the last days it shall be, God declares, that I will pour out my Spirit on all flesh…” The Spirit was poured out, and then Peter preaches Christ to the crowd – “Men of Israel, hear these words: Jesus of Nazareth, a man attested to you by God with mighty works and wonders and signs that God did through him in your midst, as you yourselves know – this Jesus, delivered up according to the definite plan and foreknowledge of God, you crucified and killed by the hands of lawless men. God raised him up, loosing the pangs of death, because it was not possible for him to be held by it” (vv. 22-24).

“This Jesus God raised up, and of that we all are witnesses. Being therefore exalted at the right hand of God, and having received from the Father the promise of the Holy Spirit, he has poured out this that you yourselves are seeing and hearing. For David did not ascend into the heavens, but he himself says, ‘The Lord said to my Lord, “Sit at my right hand, until I make your enemies your footstool.”’ Let all the house of Israel therefore know for certain that God has made him both Lord and Christ, this Jesus whom you crucified” (vv. 32-36).

They were cut to the heart by Peter’s words, and he tells them – “Repent and be baptized every one of you in the name of Jesus Christ for the forgiveness of your sins, and you will receive the gift of the Holy Spirit. For the promise is for you and for your children and for all who are far off, everyone whom the Lord our God calls to himself.” That day, 3000 souls were baptized and added to the Church.

In the salvation of 3000 souls, Pentecost is shown as a reversal of the golden calf in Exodus 32. The Hebrews made a golden calf to worship when Moses ascended Mount Sinai and, for their idolatry, “3000 men of the people fell” (Exodus 32:28). The division and pride of the nations (Babel) and the idolatry of the nations (golden calf) will be broken, undone, and redeemed by the work of the Spirit as the Church faithfully proclaims and lives the Gospel in word and deed.

Pentecost gives hope. At Pentecost, the Spirit of God resided with the disciples, who just days before were frightened and hiding, full of despair behind locked doors. And the Spirit gave them the strength and boldness they needed to do what God called them to do. The fire came and gave them what they did not have on their own, enabling them to do what they could not do before.

And every day brings such challenges – to speak of Christ, to do our duty, to have faith in God and people; to love, teach, and model Christ before our children; to love our spouse, to love our neighbor as ourselves; to trust the promises of God. But, the Holy Spirit has come, not just to enable men to preach bold sermons at grand occasions – but to enable us to fulfill what God has given us to do each day. We do not labor in vain, we do not labor alone, and we do not labor without comfort and help.