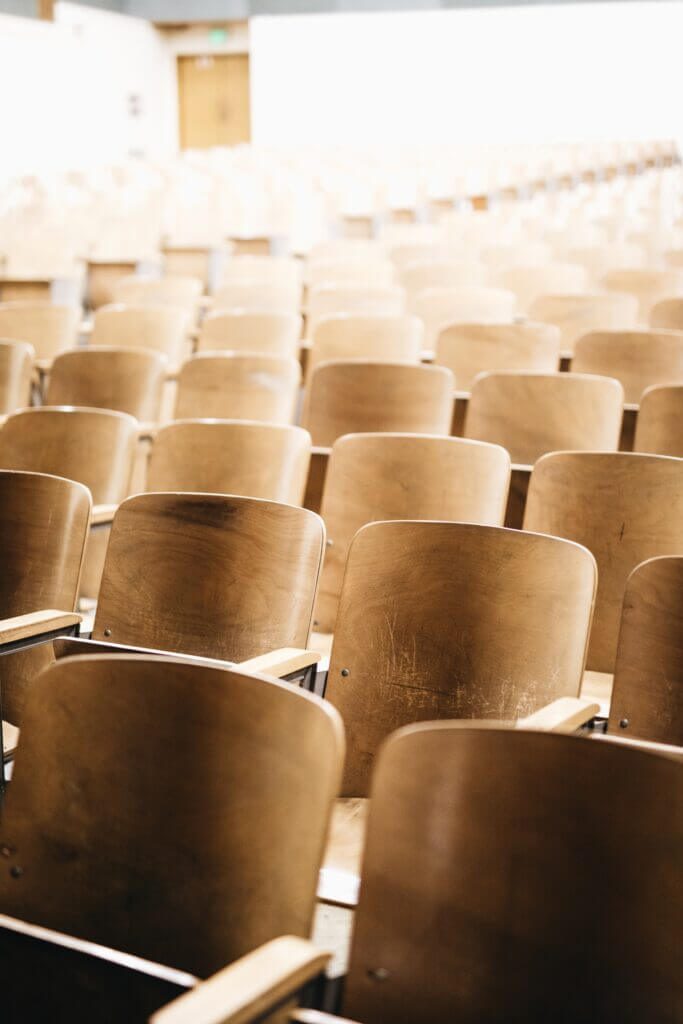 The one thing that secular and classical Christian education has in common is the dismissal of lecturing. Could it be, however, that the problem isn’t lecturing? Maybe the problem is bad lectures. Lots of bad lectures. Not just bad lectures delivered by bad lecturers, but dreadfully bad. Duller than “on hold” music. Dryer than dehydrated jerky. More monotone than the guy at the funeral parlor.

The reputation of lecturing is besmirched. In public schools, teachers are programmed to facilitate “student-based” and “project-based” learning. In classical Christian schools, the Socratic method is favored. The problem is that sometimes—indeed, a lot of times—teachers are required to actually deliver information to students, information that students simply can’t arrive at by a bread crumb trail of questions. This is obviously true in math, but also in the humanities.

Qualification is required. I am not saying lecturing and only lecturing. I am not assassinating class discussions, activities, projects, group work, or written comprehension questions. I’m merely proposing that lecturing be embraced as part of the motley assortment of necessary methods to be used in the classroom.

Since lecturing is now more passé than two-parent families, teachers are not taught to develop the skill of lecturing. There is no course in teacher college about how to be an effective lecturer, which is like medical school offering no class in pharmacology. Even worse, during my five years as an undergraduate, I had precisely one good lecturer, which is to say I had precisely one good professor. He worked in the history department and he changed my life. He taught me how to think. His classes were the hardest, and yet I rearranged my schedule to take them. My only regret is I didn’t take more. The difference between him and all the rest is he actually cared about being a good lecturer. He was passionate, interesting, clear, and suspenseful. His lecturing made him the most popular professor in the department.

1. The Socratic method is effective because it leads the learner through a process of discovery.

The process of discovery is the process that leads to maximal learning. But why is this the case? The reason is that in the process of discovery the learner sees, as Pascal said, “the clash of opinions in debate.” The contest of opinions appeals to us, not the conclusion. The tournament of arguments attracts us, not the trophy ceremony. We enjoy the debate, the passions of colliding opposites. We enjoy the journey more than the destination. The movie with no villain is played to an empty theater. We want to see a winner and a loser.

What if this process of discovery was mimicked in the lecture form? What if, for instance, when learning about Truman dropping the atomic bomb on Japan, the teacher framed it as a moral question with two schools of thought—the traditionalists and the revisionists? What if the teacher showed the clashing opinions of the historians, how traditionalists like Richard B. Frank argue that the United States’ decision to drop the bombs actually saved lives and ended the war in the Pacific? Then the teacher brings the revisionists into the ring, arguing that the Japanese were on the brink of surrender but the United States dropped the bombs anyway to gain a regional advantage over the Soviets. Who can resist eavesdropping on a good quibble?

As those two sides do live battle with arguments as ammunition, the facts are revealed, a drama unfolds, and discovery happens. As Pascal said about the truth, “If we are to enjoy it, we must see it arising from the debate.” The place where truth arises from conflict is the place where discovery happens. And the Socratic lecture need not contradict John Milton Gregory’s law of teaching, “Excite and direct the self-activities of the pupil, and as a rule tell him nothing he can learn himself.” When you remember that lecturing is reserved primarily for new information that cannot be deduced through the Socratic method, you realize that you are laying the foundation upon which the house is built. If Socratic lecturing lays the foundation, then the Socratic method frames the house, installs the sheetrock, and hangs the chandelier. The two are not in competition with each other.

2. The Socratic method is effective because it embodies that ancient truth: Asking the right question leads to the right answer.

But the Socratic method can take students only so far. It depends upon prior knowledge. Understanding the complex causes of the Civil War, for instance, requires gobs of historical knowledge that students simply don’t possess. Some effective form of information delivery is needed. Why have students look at their iPads and read generic articles when the teacher can, well, teach? While the teacher is weaving together the complicated mess of the 1850s American politics—abolitionism, sectionalism, compromises piled atop compromises, Supreme Court decisions, and elections—they can navigate students through a series of fact-finding questions where answers lead to the next question. In so doing, teachers can help students see the problem, showing those minds of mush what the right question sounds like. Students might even develop an ear for good questions so they can lead the next Socratic discussion.

3. The Socratic method is effective because it pulls students out of superficiality.

Students want substance, they just don’t know how to achieve it on their own. They know what substance looks like only because it is so different. It sounds different from tweets and Lady Gaga. Substance sounds weird, foreign, and unfamiliar. And they want it. In a relentless pursuit of “why,” the Socratic method is like the never satisfied coach who throws his headset to the ground in anger when his team is up 28–0. There is more! Indeed, on most topics, there is always more to be said, more assumptions to identify, more viewpoints to consider, more self-criticism to employ. For most high school students, the default is to take a topic and summarize their thoughts on the matter in one hastily written paragraph. We might call this the bag of superficiality, and untrained teenagers tend to carry it with them everywhere they go, even as they simultaneously wish to be rid of it. The Socratic method reveals to students how to think through a topic and how to have empathy and respect for their opponent. There is so much more than what’s in the giant bag of nothing. The Socratic lecture achieves these goals and adds another—exposition.

In Neil Postman’s 1985 book Amusing Ourselves to Death, he lamented the increasing lack of exposition in the classroom. Exposition is superficiality’s opposite. Exposition models mature thinking, the sort of thinking marked by proofs and refutations, thinking abstractly, objectively, and sequentially, valuing reason and order, and the Basset Hound–like ability to sniff out contradictions. The humanities classroom needs to be about arguments. Not the John Dewey mode of arguments, which nurtures reason in the biosphere of emotions and feelings. Not the technology-push of visual stimulation and student sovereignty, which sounds too hoggish so we call it “project-based” learning. The classroom needs arguments that have the maximum number of axioms and enigma that the grade level can handle; arguments that come from stories told not for entertainment, but as a prerequisite. Exposition that functions, as Postman says, like “a mode of thought, a method of learning, and a means of expression.”

All of this can be achieved through a well-organized Socratic lecture. Imagine the topic is “What are the religious beliefs of the Founding Fathers?” Imagine, then, that the teacher shows the students that there are two common schools of thought—the Christian America Advocates and the Secularists—who each study the same people living during the same time. Yet the historians from each group come to profoundly different conclusions. The teacher quotes from biographers that claim James Madison was a Christian. Then the teacher quotes from others who claim he was a deist. “How can this be?” the teacher asks. In the process, students discover the debate is flawed because of the historian’s binary categories of Christian and deist, categories that historians leave so undefined and amorphous that they are virtually useless. As students discover how those two categories ought to be defined, and then compare them to the actual beliefs of individual Founding Fathers, students not only see the religious beliefs of the Founding Fathers, but they have learned a perfectly simple technique for escaping superficiality: pay more attention to the dictionary.

Conclusion
I sometimes wonder if the educational intelligentsia pooh-poohs lecturing because it’s such hard work. Here’s a far-fetched conspiracy that I probably half-believe: Lecturing is unpopular because it takes precisely no preparation time to deliver information by reading from a textbook or an information sheet. But to give one—one!—coherent, searching, nuanced, and researched lecture in an interesting fashion requires untold hours of work. That reminds me of what a wise half-brother once said, “Not many . . . should become teachers.”

Jason Cherry teaches history and literature at Providence Classical School in Huntsville, Alabama. He graduated from Reformed Theological Seminary with an MA in religion and is the author of the book The Culture of Conversionism and the History of the Altar Call, now available on Amazon.