Shakespeare’s Julius Caesar and the Spirit of the Age 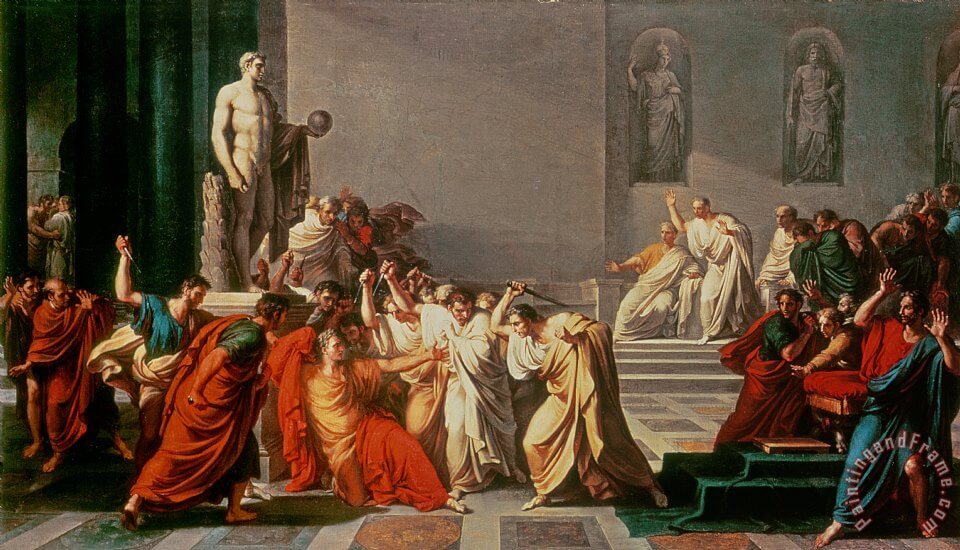 At a crucial moment in Shakespeare’s Julius Caesar, protagonist Brutus bemoans the “spirit of the age,” a disposition toward tyranny that allows Caesar to assume the power of a king over Rome’s erstwhile republic. Brutus and his friends conspire to defeat this insidious evil by murdering Caesar and restoring popular government to Rome.

As modern audiences, we root heartily for the conspirators in their attempt to save Rome, because we see obvious parallels to our own time. It’s easy to imagine Caesar with the face of Donald Trump or Hillary Clinton, and to see their followers as a perfect mob of self-interested fools. To cast down such irresponsible power seems like the height of patriotism. Brutus would be proud!

Once he kills Caesar, however, the victory quickly turns to ashes in his mouth. The mob that exalted Caesar is easily led to oppose his executioners, and Brutus realizes that Rome doesn’t want the deliverance he has wrought. Driven from the city as traitors, the conspirators are forced to raise an army to defend themselves. To make matters worse, they begin arguing over who will enjoy the spoils of victory and who will occupy the highest seat. In the midst of this growing anxiety, the ghost of murdered Caesar visits Brutus in a dream on the eve of battle:

BRUTUS. Speak to me what thou art.
GHOST. Thy evil spirit, Brutus.
BRUTUS. Why comest thou?
GHOST. To tell thee thou shalt see me at Philippi.
BRUTUS. Well, then I shall see thee again?
GHOST. Ay, at Philippi.” (4.3.281-285)

Brutus doesn’t actually see Caesar’s ghost at Philippi the next day. What he does see is the truth: that his own actions in saving Rome have been no less tyrannical than Caesar’s. In assuming absolute power by force, he has succumbed to the very “spirit of the age” that he had sworn to kill. In killing a tyrant, he has become a tyrant himself.

Shakespeare’s condemnation of tyranny is aimed not only at Brutus and Caesar, however, but at the mob that exalts them. Three times, the mob offers Caesar the crown, begging him to rule them. When they hear that he has left them money in his will, they riot against the conspirators with insane fury. Shakespeare suggests that the mob itself is the real source of tyranny, because it draws a tyrant and raises him up as its proper ruler. Both rulers and ruled alike participate in the spirit of the age.

In my anxiety, I often forget Julius Caesar’s lone encouraging theme: the crisis has a spiritual cause.

This brings up an uncomfortable question: if Hillary Clinton and Donald Trump stand in for Caesar in my modern reading of the play, who stands in for Shakespeare’s mob? To put a finer point on it, are we citizens more like Brutus, or more like the mob that dotes on Caesar? Do we offer the crown of our submission to any demagogue that promises largesse from the public treasury? Do we desire to be ruled most of all? Julius Caesar derives it power from this revelation: we are the tyrants. That “spirit of the age” that troubled ancient Rome lives on in us today, whether we offer the crown or take it.

Shakespeare ends his play with the forlorn hope that tyrants can see the error of their ways and stifle the spirit of the age. The honorable Brutus, who famously “reserves a sword for myself when my country shall need my death” (3.2.16), recognizes tyranny in his own heart and carries out an internal revolution, falling on his own sword in Act V.

Maybe Brutus’s era was a more honorable time. Then again, the kind of selflessness symbolized by his act was probably as rare then as it seems to be now. Be that as it may, the weaknesses of character, the frailty and petty selfishness, the thirst for reputation and primacy that plague Shakespeare’s conspirators run rampant in our own civilization – among leaders and citizens alike. Truth be told, I find them in my own heart, and I grow uneasy at the implications. Do I belong to that mob as well? Am I fit for no ruler but a tyrant?

Thanks to the genius of the American electoral system, the people usually get the leaders they deserve. Unfortunately, these same people often constitute a Shakespearian mob, that breeding ground of tyrants, and the leader they deserve is Caesar.

In my anxiety about the current political situation, I often forget Julius Caesar’s lone encouraging theme: the crisis has a spiritual cause.

The problem with Brutus’s age is that it is animated by the wrong spirit – in his case, tyranny instead of republicanism. But such a problem has a solution that does not depend upon a mob’s caprice. A spiritual crisis may be averted by a spiritual intervention. Unlike Brutus, who looked into his own heart for answers and, finding only tyranny, murdered himself, we who likewise recognize the evil in our hearts have the hope of salvation from outside, from beyond the hills. God can hear from heaven, forgive our sins, and heal our land. He can give our age a new spirit, a Holy Spirit, and make us fit for righteous government.

May God haste the day.