Raft Building and the Great Conversation

The glory of literature is that it makes the Great Conversation possible across the ages, between men and women from different worlds. 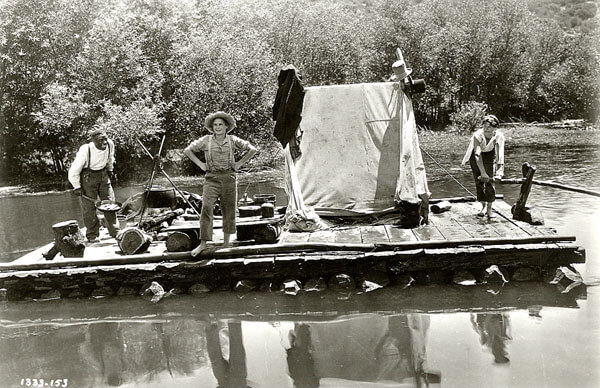 We teach Mark Twain’s Adventures of Huckleberry Finn every year in our American Lit class. Despite its unassailable status as an all-time classic of the genre, my reasons for the choice are as personal as they are professional. I assign it over and over because of how much I loved it as a boy.

I must have read this story a dozen times before the tenth grade. In my imagination, I camped on Jackson’s Island a thousand nights, glided down the Mississippi on a thousand log rafts, and outwitted crooks in a thousand daring escapes. The atmosphere of the book was intoxicating to me—it seemed that Huck lived the ultimate summer vacation, and I wanted to live it with him. One summer I even convinced my friends to help me build a raft and float it down the little river that ran past our house. Supplied with sack lunches, straw hats, and fishing poles, we spent a glorious vacation reenacting Huck’s adventures.

It would not be an overstatement to say that I entered Huck’s world in my mind’s eye and lived his story in my heart. I recreated all its details as faithfully as I could. This was no English assignment; this was an adventure. I was not doing the work of a literary critic or even the work of a student; I wasn’t working at all. Absorbing Twain’s book wholeheartedly, without preconceptions, without designs of judgment or evaluation, I was reading to experience, the way a hungry man eats. I wanted to see through Huck’s eyes, to be in his world—and I did, and I was.

In his wonderful book An Experiment in Criticism, C. S. Lewis says that this is one of the great powers of literature: the ability to multiply our experience, to draw us into foreign worlds and allow us to experience them from the safety of our own. “My own eyes are not enough for me,” Lewis says. “I will see through those of others.” I would not have put it in those words as a boy, but I remember feeling that hunger for a broader experience.

As I grew up, I never stopped reading Twain’s novel. Every few years I went back and relived my old pleasures—and as I did, I noticed that the story had more to say to me each time. Huck’s world seemed to grow with me, to mature as I matured. I began to understand that Twain’s boyhood adventure story was merely the setting for a deeper, darker tale. Huck’s relationship with the slave Jim and the terrible choices it involved fell on me as powerfully now as the sunny atmosphere of the Mississippi valley had before. I moved gradually from a sensory experience of the story to a mental grasp of Twain’s theme and purpose. Twain had hooked me by the heart as a boy—as I grew up, he began to engage my mind and make a claim on my opinions.

This is not to say that the sensory, setting-related pleasures passed away. On the contrary, they matured right along with me. I noticed Twain’s wry, ironic wit in lines that had gone right over my head as a boy. I laughed out loud now, instead of just reading in wide-eyed wonder. I discovered that Twain was not only a master at weaving an atmospheric spell; he was also hilarious.

But I also found that behind his humor was a bitterness that had been invisible to me before, an argumentative stance toward his characters and their foibles. As I grasped Twain’s theme, I heard his voice more clearly and realized that he had written Huck Finn to grapple with a problem—to identify something deeply wrong with American society and to assign blame for it. He was making a case and asking me to take his side. As I learned my own mind, I found that I could not agree wholeheartedly with every point he made, much as I loved his characters and their story. But perhaps because of that love, the grown-up in me spent as much time and energy thinking about Twain’s argument as the child in me had spent reveling in his story. I was drawn irresistibly into a kind of discussion with Mark Twain in my own mind and heart, and found myself contributing to that discussion, drawing on my own ideas and experience.

Mortimer Adler once described Western civilization as a “Great Conversation” about ideas, carried on through the ages by everyone who has ever puzzled over the good life, human nature, the existence of God, or any other transcendent question. I came to realize that Huck Finn was Mark Twain’s contribution to this Great Conversation, and that my own responses were mine. By embracing his story in my heart, mastering it in my mind, and interacting with its themes, I was participating in a culture-wide, history-long search for Truth.

Lewis suggests that this search is what makes us fully human. “In reading great literature,” he says, “I become a thousand men and yet remain myself…I see with myriad eyes, but it is still I who see…I transcend myself; and am never more myself than when I do.” This is the glory of literature: it makes the Great Conversation possible across the ages, between men and women from different worlds. It allows us to see with the eyes of others.

I want books like Huck Finn to hook my own kids by the heart and engage their minds. If they can learn to imbibe the classics as children, they will be able eventually to contribute in their own ways to the Great Conversation, and live fuller lives as a result. This is my professional reason for assigning Huckleberry Finn every year.