A Pedagogy of Negation: The Nihilism of Modern Education 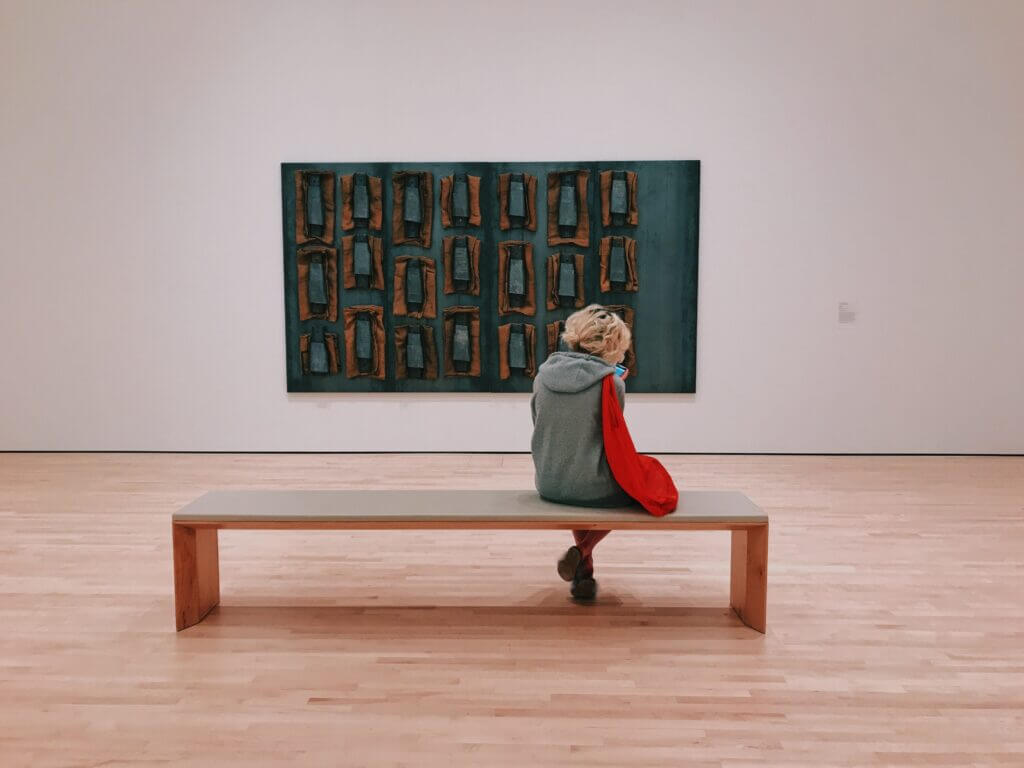 One morning I shadowed a middle-school tour inside the Cleveland Art Museum for half an hour, overhearing the tour guide’s lecture. I had already spent two hours between the medieval and romantic exhibits—a breathtaking experience of history given in full sweep—and now, as though inevitably, I end my round in the late-modern and contemporary gallery. Here I find the group of students sitting on the floor in a huddle, hugging their knees, while a middle-aged woman, the museum tour guide, gestures to a painting behind her. The very instant I enter this gallery, a question rings out in my mind with all the sting of a philosophical proposition or the metaphorical thrust of a parable:

“What has happened to the world?” asks the gallery itself in cynical rhetoric.

This is a gallery of desecration, of what I call “art of transgression.” The painting to which the tour guide points—and in no small gesture, directing the irrecoverable gaze of the children—depicts parallel lines of train tracks running into a reimagined (or de-imagined) Auschwitz. She describes to the children, in no cautious terms, the phenomenon of burning corpses, the blooming mushroom cloud of a nuclear explosion; in short, all the chaotic minutiae of a blind and irrational universe. The painting is made out of lead and ash and rotted wood, intended to degenerate and crumble—and this it does, over time, falling to the floor like bits of flesh returning to the dust. In this way the painting is a kind of performance art in which the performer is that selfsame destructive force that it dares to celebrate.

“This entire gallery is about death and decay,” says the tour guide, waving her hand in a last, empty motion. And this is precisely where she leaves it. “Let’s move along.”

The children stand up wobblingly and the tour guide ushers them away and into the next room, and this is part of the art, I realize, part of the choreography: an acting out of resignation. Next gallery, she sits them down in front of a different canvas, this one divided equally between two solid colors, shades of gray-blue. The bottom half is dark, the top half light.

“But don’t think it’s stupid,” she tells the children. “It represents what you see when you’re out on the ocean, just water and sky. Nothing else. It represents the Buddhist ideal of minimalism. You must open your mind: empty it, free it of values and judgments, and the universe will open up to you. But don’t pray. No. Not prayer. You must clear your mind.”

So, this is your way of being in the world, child. You have been thrown into a universe of ultimate decay in which death is a matter of sooner or later, and there is no lasting reality. Life, while it lingers, is but a gallery of deterioration. This is the world as it is. Let’s move along, while we have the misfortune of being here. Move along, but clear your mind of values. Don’t make judgments. Revel or writhe (whichever you fancy) in your indiscriminate existence. For you have received nothing that will last, and nothing that ought to, and you yourself are like the lead and ash and rotted wood that falls in crumbles in a show of nihilism. Let us not discuss the wages of sin, nor say that art reveals the nature of the human heart. Let us not speak of evil, nor of God. Let us rather commit our minds to meaninglessness. And, above all, let us not be grateful.

This is when I leave. I retreat to the dearly familiar Impressionists, and Monet is like living water. But I fear that my retreat is not enough. If this is the education our children of today, and of tomorrow, are being offered—this spoon-fed nihilism—then fear can only be our beginning. Had Screwtape the demon set out to invent a more destructive pedagogical model, he would have done no better. Such is a pedagogy of despair and negation, of cynicism and ingratitude, of disenchantment and dullness.

This is not at all to say that good education ignores the inherent tragedies of existence, nor of death. The inevitability that all things in this vain world—even the very receptacle of those things, which is the world itself—that these should come to ruin and utter annihilation is not the conclusion of a petty nihilist. It is a recognition of Providence, a certainty of grace, of a grace beyond our reckoning. Ruin is inevitable, surely, but on the other side of ruin is a life so boundless as to belittle the meaning of inevitability itself. And this selfsame life emerges in our dark and death-ridden world through refractions of light, visible to our gaze in even ordinary things: a room of art, a canvas of paint, a huddle of listening children.

Good education bears divine responsibility for the gaze of these children, who offer their delight to the world and only ask that their hope not be returned void. Good education says to them: “Let us not move along so quickly, but let us linger here in this place, where there is still much for us to see, and to love, and to cherish. Therefore, let us focus our gaze. Let us fill our minds with truth. And, above all, let us pray and be thankful.”

Justin Hall is a writer and musician. He holds a Bachelor of Music degree from the Cleveland Institute of Music, where he is currently completing his graduate studies in music performance.