Is Odysseus a Faithful Husband?

My students often blush at the irony of the image of Odysseus' marriage bed for Odysseus himself hardly deserves the appellation “faithful" - but is there more to it than meets the eye? 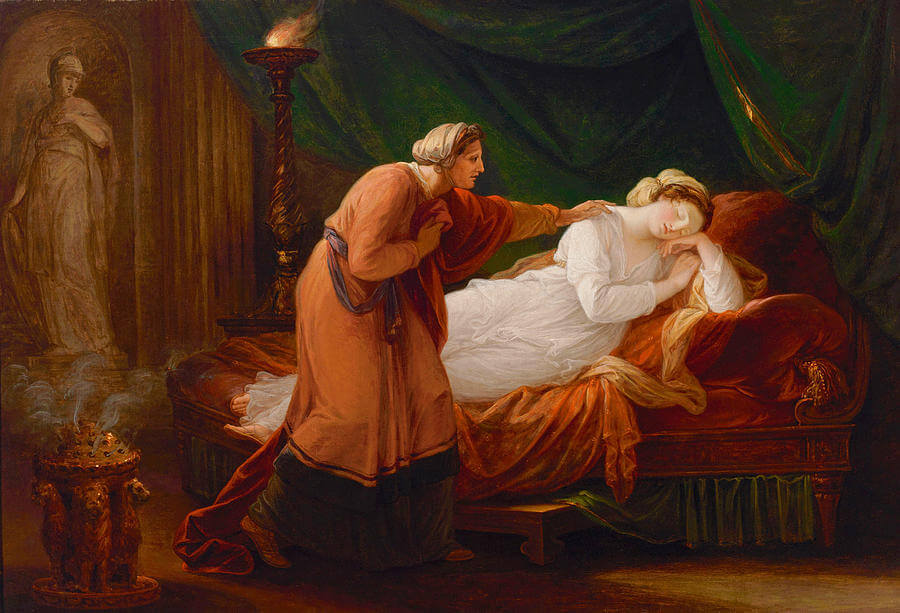 The marriage bed of Odysseus and Penelope gives us one of the most powerful images in Homer’s Odyssey. Carved from a living olive tree still rooted in the ground, it symbolizes the centrality of marriage to the health and preservation of a good society. Odysseus’s struggle to return to this bed and his slaughter of the usurpers who would take his place there form a satisfying climax to one of history’s greatest stories.

My students, however, often blush at the irony of this image, for Odysseus himself hardly deserves the appellation “faithful,” at least as concerns the marriage bed. They have a point, of course. Given his prolonged dalliances with the goddesses Circe and Kalypso, wouldn’t “serial philanderer” be a more appropriate epithet?

In a poem whose main theme is homecoming and whose message praises loyalty and steadfastness – faithfulness, in a word – this is not a minor quibble. On the one hand, Homer teaches us to exalt Odysseus and Penelope as the embodiment of faithfulness. In their marriage, and in the struggle they endure to preserve it, we see Ithakan society, or Greek society – even human society – in microcosm. Civilization is a stake, Homer seems to say. The cleansing of the palace in the final chapters of the story bears witness to the gravity of the threat that the suitors pose by disregarding Odysseus’s marriage.

The problem, on the other hand, is that Odysseus seems to disregard it himself! How can he deserve our praise when his sexual conduct seems to mock the very idea of faithfulness?

One common reply to this problem is to note that ancient Greek concepts of marital fidelity were obviously quite different from modern Christian ones, and to warn students against reading their own ideas of morality back into a foreign period.

This reply is an evasion, however.

In most ways, Odysseus and Penelope’s concern for marriage looks a lot like ours. “Nothing is better than this, or more steadfast,” Odysseus says, “that when two people, a man and his wife, keep a harmonious household…” (6.182) The fact is, Odysseus’s actions on the islands of Circe and Kalypso give the lie to his own words. He appears to be unfaithful by any definition, ancient, Christian, or otherwise.

Maybe the problem is not a clash of ancient and modern ideas about marital fidelity, but a clash of simple definitions. What does “faithful” really mean?

If being faithful means being trustworthy, then despite Homer’s epithets to the contrary, Odysseus comes up short, at least as concerns his marriage bed. This has troubling implications for readers, leading them to condemn Homer for inconsistency or sloppiness, or a lack of concern for detail.

On the other hand, if being faithful means having faith – trusting in another – then things make a lot more sense, for Odysseus has this quality in abundance. In fact, you could argue that as concerns his marriage, “trust” is the assumption behind his entire journey. Just as Penelope trusts that he will return to save his family and his city, so Odysseus trusts that Penelope is waiting for him. He depends on it utterly. He has no plan B should he arrive to find his throne despoiled. His future rests in Penelope’s hands, as hers rests in his.

This idea of faithfulness boils down to a reliance on the other, rather than an ordering of the self. It is not the presence of correct conduct, but rather the absence of other resources. The faithful one depends for his identity on the work of another. “I am what you do in my behalf,” he says. The only act that makes someone faithful by this definition is believing in, or depending on, someone else. Odysseus’s own behavior, questionable as it may seem to modern readers, cannot therefore make him unfaithful; he is faithful because he depends upon Penelope. This dependence, and Penelope’s worthiness of it, draws a praiseworthy response from Odysseus: despite (and even in the midst of) his dalliances, he longs for home.

Penelope herself exhibits this kind of faithfulness as well. She waits for Odysseus like a pillar in his house (1.333) All her actions are negative: she declines to finish the burial shroud; she declines to move the marriage bed; she declines another proposal of marriage. She draws her identity not from her own stratagems, but from Odysseus and the hope of his homecoming, over which she has absolutely no control. Some readers call her a secondary character because of this lack of initiative, but with respect to the marriage that is such a central theme of the Odyssey, her inertia is the essence of her faithfulness.

This understanding of “faithfulness” allows my students to hear Odysseus wailing for his homeland from Kalypso’s island without blushing at the irony. His good name, it turns out, doesn’t depend on his performance, but on the vicarious action of those in whom he trusts. It is Penelope’s constancy that makes Odysseus weep, drawing his heart ever homeward to his rightful throne.

I wonder if this definition might also help my students navigate their own homeward journeys. It is always worth being reminded that the world runs on faith, and that in the final analysis, we are not what we do; rather, we are who we depend on. This can be scary, but also comforting, depending on whom we trust.

I hope my students learn this kind of faithfulness from Homer’s Odyssey. I hope they learn to depend, like Odysseus, on Someone whose steadfast love draws them inevitably to a triumphant homecoming, and who has prepared a place for their souls to rest. I hope they learn to wait, like Penelope, on a husband who hastens home to give them a royal name and a kingly inheritance. In the end, I hope they discover the Good News that His gifts include faith itself, for He always creates what He requires.