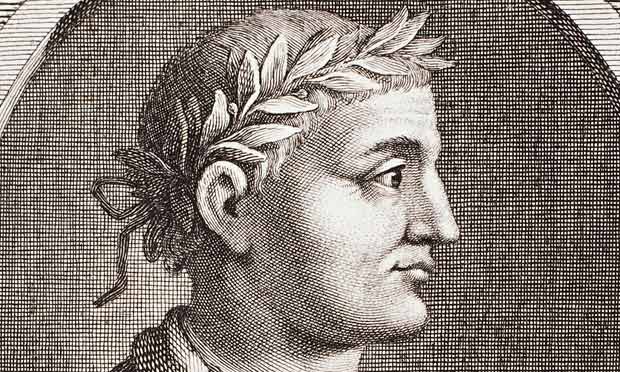 Known best for his odes, Quintus Horatius Flaccus cuts one of the best odd-luck stories for the son of a former slave in first century Rome (B.C.E.). Though he was likely of mixed heritage, Horace met surprising fortune. His father worked as an auction agent and had bettered himself, so well in fact that he owned his own farm. With steady income, he wisely had Horace educated in Rome rather than in his native village with the sons of centurions.

With the completion of his education, Horace made the grand tour of his time with other wealthy young men and traveled to Athens. The story, however, quickly changed. While there at the Forum, young Horace was enraptured by the words of Brutus, Caesar’s assassin. Brutus was passionately pleading with the crowd to join him in his battle for the empire, and twenty-year-old Horace was promptly made a legionnaire! With no military training, he joined in the first major battle at Philippi where Brutus’s forces were promptly routed.

Somehow Horace wasn’t executed when captured. He returned to Rome to find that his father had died and his home, possessions, and land had all been given to an honorable war veteran. Penniless, Horace found a secretarial job in the treasury, likely writing letters and copying page after page of accounts.

He was alive, and he was furious at his own naivete, so much so that he began to write about it as a vindictive hobby. Some of his friends just happened to share his negative verse with Maecenas, nobleman and trusted advisor to emperor Augustus. Within a year, Maecenas became Horace’s patron and offered him wealth and a rural estate outside of Rome. Thriving as a writer of both critical and noble verse, Horace had arrived. He quickly won the Emperor’s attention, yet Horace was never constrained by a desire to please those in power. A handful of odes makes that clear. What does stand out is his ability to sermonize.

Sermones. Most often translated as satires, in Latin, they are pithy moral lessons. Our English word “sermon” derives from the same. Yet in first century Rome, they are some of the best poetry Horace wrote. True, we lose the beauty and rhythm of the Latin verse, but in English, Horace’s imagery and tone are clear. In the third sermone of Book I, Horace tells us about the singer Tigellius:

A flair of contradictions that fellow.
Sometimes he raced as one who flees the enemy;
Sometimes he walked solemn-slow as one who bears second offerings to Juno.
Sometimes attended by two hundred servants, sometimes by ten.
Now he spoke of kings and tetrarchs, and only of the great.
And now he would say: Had I but a three-footed table, a shell of pure salt,
and toga which though rough would shelter me from the cold.
Had you given this fellow, so frugal, so content with little ten times a hundred thousand sesterces,
within five days there would be nothing left in his coffers.
All night he carouses, all day he snores.
No one ever contradicts himself so much.

As in many of his odes, Horace’s disapproval is clear, but there is a lesson to learn. He continues with a rhetorical dialogue where fictional Maenius counters that we all have faults. Horace retorts that, “Your own faults you observe with bleary eyes, daubed with ointment. Why then do you pounce on your friends’ faults with the eyes of an eagle or a serpent of Epidaurus?” It’s hard not to hear Christ’s words here about the dust speck in our friend’s eye and the log in our own. And that perhaps is one of the lasting values of Horace’s writing—the element of truth.

Consider what Horace offers next in the same sermon. He harshly lists examples of friendship and family:

Let’s turn rather to the blind lover unaware of the brutal defects of his beloved . . .
I wish we had made the same mistake in friendship.
And virtue had bestowed an honorable name on errors of this sort.
Like father to son, so we would not become irritated with the faults of our friend.
Is the son short-sighted?
“O, he squints a little bit,” says Daddy with affection. . . .
Here’s a friend who is too brusque and outspoken.
Let him then be judged frank and fearless.
Hot-headed is he?
Let him be accounted a man of spirit.
This is how to make and keep friends. . . .
For no one is born without defects.
The best is he who is afflicted with the least.
An indulgent friend weighs my good qualities together with my faults, as is just,
and tips the balance to those most numerous if he wishes to be loved.

Horace may still be speaking of man’s contradictory nature as he did about Tigellius, but he identifies something familiar to us all. One might think that love, or even favor, is blind; but in fact, we choose to see what we want to, whether through the eyes of love or criticism. Horace’s version is rather selfish, saying almost manipulatively that a good friend should see the best in him if he wants to be loved in return. This is what prompts our own reflection and discussion. Do we agree with what he says?

Horace may delight in scoffing as in Proverbs 1:22, but at the same time he dissects human nature with ease. His insights allow us not only to see ourselves, but also to judge our own thought and actions