The Forscoff Lectures: A Greek Hope 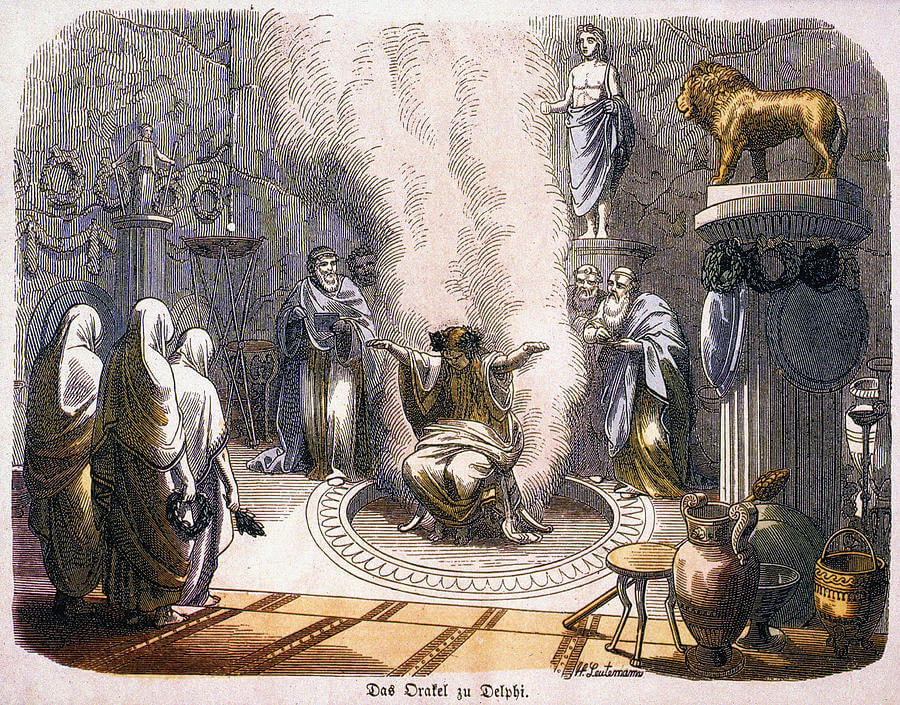 Last week, we ended with the Greek world and the pride of this ancient people. As always I demand you take notes, as the whole premise of sprite school is to learn from the triumphs of our Father, improve your tactics against the Enemy, and win more patients for our cause, coffers, and confines. Our lesson tonight focuses on the willingness of patients to help us, as demonstrated in the most cherished of Greek institutions, the Delphic Oracle.

Behind every successful oracle in our Father’s service were scores of fiends and the Delphic Oracle proved no exception. We’d lurk in the caverns of Mount Parnassus for the priests and priestesses to mumble whatever religious jargon they thought might work, then release gas from every cleft and crevice available to us and with such vehemence we loosed scree from the mountainside. As the Oracle breathed it in, she would be lulled into a trance and uttered whatever vague pronouncements we whispered to her. And this worked for a thousand years!

Such practices show our Father’s foresight against the Enemy’s intransigence. You see, the Enemy refuses to countenance other ways that sheeple might reach for him, other than what he has prescribed in his precious, little book. Our Father recognized that if we helped the humans every so often, we may lose a battle and still win the war. Soon, we ceased proffering vague messages that might destroy a single patient in favor of clear, positive pronouncements from our stooge Apollo. Ones so stirring they’d rally every patient to the banner of our Lord and convince them of their ways rather than the Enemy’s rules.

Our opportunity came when one rather odd fellow named Chaerephon arrived at Delphi one day. He asked the Pythian priestess who was the wisest man on earth, and upon his inquiry we demons were so stunned we could scarcely break any wind at all. Who should we say was the wisest? Should we confirm the methods of those wily Sophists, a movement after my own heart if I had such an organ? Or someone else?

Thankfully, our Father knew of the perfect patient, one who had sadly survived the recent war between Athens and Sparta. The patient was one of the ugliest men in Greece, but this detriment only spoke in his favor, for our Father instructed us that if we conferred the appellation of the “wisest” on anyone who believed they deserved it, the pronouncement might end there. We would give the title upon someone who would act on it, and so the honor fell upon a crotchety, homely-looking patient named Socrates.

As expected, Socrates dropped everything to test the oracle and caused more damage than we ever could have hoped. He consulted everyone from politicians to artisans, badgering them about the nature of wisdom until they made him drink poison to rid themselves of his loathsome person. But, before Socrates died he inspired other patients who could write. He awakened in his own patient Plato a world of possibilities previously unknown to the sheeple, but one in which we demons have long since dwelt.

You see, Socrates realized he could find something called truth in and by himself. He rambled on about an unseen world of forms where ideals like justice, love, and beauty existed in some amorphous blob untainted from decay. The world around him the Enemy really made was inferior to this world of forms Socrates fabricated, with forms of friendship and garbage floating by in pathetic tranquility. Socrates found such Forms through the Enemy’s Mark upon him, but—and this is the ruse—without the Enemy’s aide. His ideas, inventions of his own mind, would become powerful idols, even if the patients never carved them out of wood or stone.

Socrates discovered a way “out of the cave,” but fell into the abyss. He found something he called truth, but he never repented. He pursued a kind of morality unheard of Greece, but the sheeple can be as wise or moral as they wish, so long as they stray from the Enemy. A religious system based on the rains or Delphi could not work forever, but we could wisdom on far easier terms than the Enemy ever would. The life Socrates found worth living then we find worth giving them, because without Him they’re vulnerable to us. While we’d gild the semblance of wisdom in boundless freedom, the Enemy smothers the fool’s submission in the promise of meaning—and what patient wants that?

It’s no wonder our trick worked so well, but we must prolong the rest of our discussion for tomorrow’s class.

Until then I remain your unyielding professor,

Winston Brady is a Humanities teacher and Curriculum Adviser at Thales Academy in Apex, North Carolina. Having graduated from William & Mary, he lives in Raleigh with his wife and baby boy, and is currently working on a Master in Divinity from Southeastern BTS in Wake Forest, NC. He has taught at Thales since 2011 and loves teaching, reading, and writing in the Classical tradition.