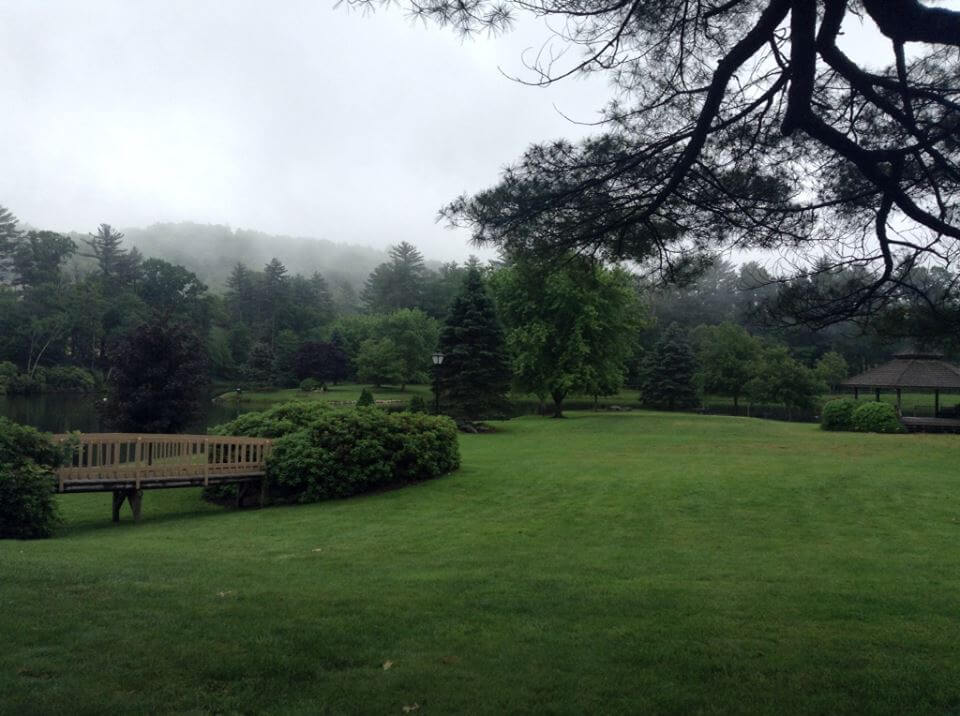 As you perhaps know we are currently at the beautiful Chetola Resort in Blowing Rock, NC for the CiRCE Summer Institute, this year a conversation about Homer’s epic poem, The Odyssey. Mr. Jonathan Councell, our friend from Veritas Classical School in Asheville, NC volunteered to journal his experience here at the retreat. The following is his day 2 experience.

Andrew began this retreat with an invocation to shallowness. I–as a literature teacher–was incensed: “the Odyssey is ancient, mythic, ethical, archetypal, anagogical, and normative; any reading must have depth–what are we going to do? Outline it and talk about its context and our feelings?”

Note for the reader: the aforementioned is a typical mental tantrum that my gluttonous personality is capable of in the context of CiRCE. I am like a child. At the end of a long school year, having given seemingly all that I can to others, I want–nay–DEMAND to be fed copiously at the table of CiRCE. Unfortunately, like many a famished child that finds candy and is told they cannot have it, my anger and desire to apply analytical tools to pry apart the Odyssey is not really what will do me any good; nor achieve the “depth” I want. In my hunger to be refreshed with what Hick’s calls, “streams too deep for taint,” I ignored the paradox that is tantalizingly there. Why not call what the Odyssey offers “rivers,” “lakes,” or–ironically enough– “Seas/Oceans to deep for taint?” Once again, life had distracted me with its goals and ends, its pragmatic and practical, and I was out to–especially this year–save my life…only to lose it.

There is a reason many pass over these streams within Homer in today’s world; its meaning seems trivial–mere myth.

I pause here to laugh ironically at the pairing of those two words.

Resuming thought: They want works that speak “deeply,” or at least claim to do so, about what really and truly matters in todays world; Gender, Race, Power, and Sex. The imaginative reason that could portray man’s journey, the pagan gods, women weaving, days beginning with “rosy fingered Dawn” are lost on the modern, smacking, it seems, of primitivism and shallowness. We would rather a “cultivated reflection” upon books of a length that are conducive to such sophisticated tools of thinking; viz. short. In our lives, nature and story–if considered at all–are meant to be internalized and translated into subjective thoughts (see Reader Response, Marxist, Homosexual, Feminist, and many other forms of subjective criticism). This is the way many Christian’s read the Bible–translating its objective narrative into subjective categories and personal applications. All this does is starve us from the universal, trapping us in a prison of our own making. Not so the Homeric man, he translates the interior mind into the external forms of myth in order to understand his thoughts: subjective to objective.

I say all of the above to come back to myself, tainted and frustrated by a modern mind, as I angrily considered this “shallowness” to be a mean-spirited Kern-ism; to taunt me with a potential “book club” experience. His praise of superficiality was an invitation to myth. Myth is what heals and clarifies, what cleanses and refreshes. Man wanted the logos (inner logic) of the universe, but the Father gives him the incarnation–logos and mythos. We wanted freedom, He gives us Glory. Homer takes what is deepest in man–his most deeply subject and mythic parts–and gives them form and color, connecting us to the universal again.

Donne metaphorically states “no man is an island,” yet Homer understands that we feel that we often are–and we find Odysseus on the island of Calypso (the hider). He then images forth an entire journey whereby a man may be reconnected and restored, how and what he and his son must learn, what he has and must find valuable. The grand scope of myth is life, the universe, and the Logos Himself. All of this has washed over me today in the mythic form of this majestic sea-poem. Andrew invited me to get on a small raft, and allow the currents of the sea to take me home, while I wanted to dive in and get nowhere. I surrender. Let me see the picture, the appearance, the fire, the wind, the earthquake, the thunder…and I will hear the “still small voice.”

Like the stranded Menelaus, who catches hold of the changing of the god Proteus, I must hold fast through all the shifting colors and forms of myth to get my answer. For, as his daughter Eidothea (Goddess of Appearance) says of him: “he is the true, the immortal; without error, without death; he knows the depths of all the sea.” This sea that encircles me with its subjective mystery is beyond my ken to plumb. But this is the true role of story and myth. As Shakespeare writes in the chorus’ lines: “then sit and see, minding true things by what their mockeries be” (Henry V).

So, we have read superficially in Homer, and here are a sampling of topics that arose without plan as we floated along the surface. Through Andrew’s moderating, I finally know what “streams too deep for taint” means.

“Men without Chests” and the quest for the Soul.

The Problem of Pain: Zeus’ apology for man’s heresy.

Xenia: the sacred stranger and the sacrament of hospitality

The Assembly at Ithaka: from Liberalism to Deconstructionism

Telemachus and the formation of Youth

The Return: for Helen, for Eve, for the sake of the Church

Proteus: how appearances lead to essence.

Menelaus and the Exodus: Biblical parallels, and cultural antecedents.

The Iliad and the Odyssey: Song of Deeds, Songs of the Soul

Obstacles of hate, Obstacles of love: The Suitors, Penelope, and the coming of age of Telemachus.

The Island of Calypso: from lesser Goods to Greater Goods.

The Breakdown of Institutions: Personal, Religious, and Civic.