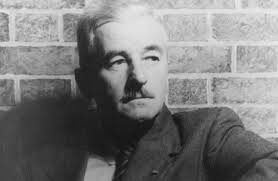 I’ve long claimed that very few people actually love William Faulkner, unlike, say, Hemingway or O’Connor, whose dedicated followers are legion; but most anyone who cares two hoots about American letters at least admires him. Faulkner, like a rich smoky Scotch whiskey, is an aquired taste. New readers have to be willing to submit to his work and few readers, new or otherwise, are truly willing to give a complex work of literature the wide berth it needs to be what it is.

Faulkner’s stories are loaded with difficult and often unlikeable characters whose collective voice make up the complex world of his Yoknapatawpha County, Mississippi. And that voice is presented in a sort of anachronistic prose more akin with the great epic poems of ancient literature than the work of his modernist contemporaries. Indeed there is an anachronistic sensibility to the whole of Faulkner’s aesthetic that allows him to successfully capture the tragic decay of the post-Reconstruction American South.

I realize, of course, that Faulkner is probably most known for a decidedly modern and experimental use of stream of consciousness to reveal the inner turmoil of his many broken characters. But I would argue that his use of SOC is a vehicle for something far richer and more complex than characterization. It’s the modernist vehicle by which he presents the diction and cadence, the specific intonations of regional speech with which he was obssessed and by which he revealed the life and heart of his place. Even in his time so much of the way his people spoke was growing increasingly anachronistic, to the extent, in fact, that by Flannery O’Connor’s time readers found the way her characters spoke nearly cartoonish.

And so Faulkner wraps the decaying cultural traditions of his region in the decaying linguistic tradtions of that same region, which, in turn, he wraps in a modernist literary device. Thus he bridges an aesthetic gap between the world for which his work mourns and the future for which it trembles.

It’s a complex approach and it takes some getting used to.

“A Rose for Emily”, his first published work, is so abundantly readable because, on the one hand, this unique aesthetic sensibility was not yet fully realized. Stylistically, it’s his simplest story and it’s not a hard read. But it also manages to clearly elucidate the themes that would eventually define his canon. And so it’s the place to start.

The store in which the justice of the Peace’s court was sitting smelled of cheese. The boy, crouched on his nail keg at the back of the crowded room, knew he smelled cheese, and more: from where he sat he could see the ranked shelves close-packed with the solid, squat, dynamic shapes of tin cans whose labels his stomach read, not from the lettering which meant nothing to his mind but from the scarlet devils and the silver curve of fish – this, the cheese which he knew he smelled and the hermetic meat which his intestines believed he smelled coming in intermittent gusts momentary and brief between the other constant one, the smell and sense just a little of fear because mostly of despair and grief, the old fierce pull of blood. He could not see the table where the Justice sat and before which his father and his father’s enemy (our enemy he thought in that despair; ourn! mine and hisn both! He’s my father!) stood, but he could hear them, the two of them that is, because his father had said no word yet.

Here you have the voicey-ness that defines Faulkner’s work, the reliance on the perspective. The dependence on the sensory experiences of his characters. The stream of consciousness.

I’m not going to review the story’s plot. If you haven’t read it yet you can do sohere. If you have then you likely dont’ want 500 words of summary.

“Barn Burning” isn’t a quintessential Faulkner – and classic American – short story for it’s plot, but rather for the way it captures the unique challenge its protagonist faces and how he responds to that challenge.

Young Sarty, like so many of Faulkner’s characters, is torn between the obligations and duties of family and the hauntings of conscience and rage. And, ultimately the rationalization that his father is brave (in a way) can’t overcome the realization that in the man is devil and demon too.

And so the boy acts. He does what the moment demands of him, or what he thinks it demands of him, as so many of Faulkner’s characters do. It’s not that he’s right to reveal his father’s misdeeds – indeed one could, I think, read his decision as quite misguided – but he does for reasons both noble and selfish, because of conscience and rage alike.

“Barn Burning” is the story of a particular moment, a particular decision, what causes it and what it means. And in that decision there’s the possibility of both redemption and terror . Young Sarty does not look back, though he wants to, though Faulkner does. He walks on, ” into the dark woods within which the liquid silver voices of the birds called unceasing”, into the “rapid and urgent beating of the urgent and quiring heart of the late spring night”, the brutality and dishonor of his father behind him.

Yet, for all that, there’s not much to do next. Perhaps he returned to his family and their tragic situation, now without their leader. Perhaps the demands of their lives together even led him to become like his father.

Or perhaps he went on to make something of himself. Perhaps he simply kept walking, alone, into his uncertain future, a poor boy without guidance or means, one of his sleeves missing and his face bruised, and despite all that became something more than the sum of his past.

But all that’s certain is that the “slow constellations” will “wheel” on, “that it will be dawn and then sun-up after a while” and then he’ll “be hungry”.