Book of the Week: Doomed Bourgeois In Love 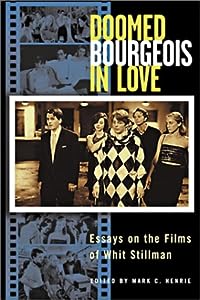 Our Thoughts:
I have heard it said that Whit Stillman is the WASP Woody Allen. I take that to mean that he tells fast-talking, dialogue driven morality films about manners, class, and the fear of death but from a less morally ambiguous perspective. In a way this is true. Like many of Allen’s most memorable characters, the characters that make up the canon of Whit Stillman are often upper class, monied preps who lack direction. Unlike Allen, however, Stillman’s films are connected by a thread of hope; he never seems to fall into the depressing nihilism that Allen tends towards. This collection of essays, which includes work by E. Christian Kopff, Mark C. Henrie, R.V Young, and Peter Augustine Lawler, among others, unpacks that hope and helps to make it accessible and recognizable.

Unlike Allen, Stillman’s films – Metropolitan, Barcelona, and The Last Days of Disco – are true comedies. Allen’s films, while surely full of tongue-in-cheek, irony-tinted laughs, are not comedies. Not really anyway (unless they are comedies of misery). In fact, they operate much more like tragedies. Stillman’s films are, however, without a doubt, comedies. Indeed, what most sets them apart from Allen’s work is a belief that as, Mark C. Henrie writes in the introduction to this collection, “we may hope for redemption after all”. In Shakespeare, comedies end in marriage. The comedy of Whit Stillman is comedy of Christian humanism, a comedy that ends in the marriage of redeemer and redeemed.

Consider this from Henrie: “perhaps in an age such as ours, it is not tragedy but comedy which is the truly illuminating artistic response. Not the ridicule-ridden ancient comedy of an Aristophenes, but the gentle and ironic comedy of Thomas More…at present such comedy is a rarified taste, but its discreet charm may lead one day to a common grace.”

Summary:
Doomed. Bourgeois. In Love. With these words, used in advertising copy to promote his first film, Academy Award-nominated writer-director Whit Stillman debuted his peculiar comic genius. At once class-conscious, theory-laden, nostalgically romantic, and deflatingly ironic, Stillman has charmed thousands (though he doubtless hope for millions) of viewers. His three comedies of manners – Metropolitan, Barcelona, and The Last Days of Disco – sparkle with urbane and ironic wit. But they also betray the presence of a profound social commentary.

Themselves charmed, and therefore intrigued, by Stillman’s art, the writers gathered here by Mark C. Henrie have each applied their considerable critical intelligeneces in an effort to uncover the political, social, and religious purposes so cleverly hidden in the comedy. These essay contend that Stillman’s art is an effort to “ironize” our ironic age; as such, they constitute a major achievement of Christian humanism in our time. (from the publisher)

What’s Being Said:
“Anyone who enjoys Whit Stillman’s movies – which really ought to be everyone, East Side, West Side, Uptown, Downtown – will be greateful for this thoughtful and highly readable collection of essays on his art and inner meanings.”
– Christopher Buckley, author of Wry Martinis and Thank You For Smoking

“One often hears literate people sigh, ‘Why are movies today so awful? What happened to dialogue, to manners, to depth?’ Then along came Whit Stillman. This fine collection of essays, as wide-ranging as they are well written, does what the best criticism always does: whets one’s appetite for Whit.”
– Roger Kimball, The New Criterion

About the Author:
Mark C. Henrie is Senior Editor of Modern Age and author of A Student’s Guide to the Core Curriculum.

Read the First Chapter:
Thanks to ISI