An Interview with the editor of the ISI College Guide

John Zmirak is the editor of Choosing the Right College, the award-winning college guide published by The Intercollegiate Studies Institute. Mr. Zmirak was kind enough to answer some of our questions about the evolution of the book, why it is published, and how the reviews are written. 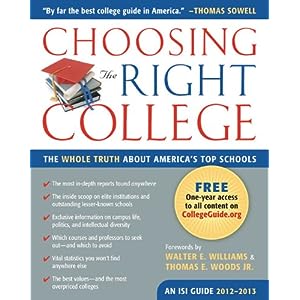 1. When was CTRC first published? Who was the original brain behind the madness?

Our first edition was produced by ISI but published by Eerdman’s in 1998, but as our publishing operation grew, we published all subsequent editions ourselves. We now publish a physical book every two years, and in the intervening years update our online guide (which book buyers can access free), bringing our coverage to more than 200 colleges.

The idea for bringing out the guide originated with Jeffrey Nelson, who founded ISI Books, and is now Vice President at ISI. The first editor was Winfield Myers, who assigned and edited the essays. I took over in 2004, a few years after finishing my Ph.D. and after several years working with The National Catholic Register, and have been Editor in Chief ever since.

2. What was the original mission/vision?

There was a great deal of concern, starting as far back as the late 1980s, over how “tenured radicals” were hijacking college classrooms for political purposes, gutting curricula, demoting Western civilization and religion in favor of multiculturalist ideology, and generally betraying the liberal arts mission of the American university. College dorms were turning into either dens of iniquity or politicized communes (sometimes both!), and religious people and conservatives were lodging hundreds of complaints every year about violations of free speech, harassment, and other abuses of academic freedom and civility. These tended to appear in the conservative press and the nascent Internet, but there was no good, systematic overview of these problems—much less any resource for parents and students who wanted to protect themselves. We wanted to make sure that our guide didn’t just list grievances or warn people away; instead, we wanted a book that reported on the abuses, but also looked for the best things at American colleges, and helped students find the good professors, the good departments, and the best colleges overall. So our profiles are a healthy mix of criticism and appreciation, pointing to the real strengths and weaknesses of a wide range of schools—from big state universities and elite colleges, to tiny liberal arts schools founded by religious conservatives. Our vision of what a college should be is grounded in John Henry Newman’s classic The Idea of a University: a place where students go to broaden their intellects, expand their range of knowledge and sympathies, and deepen their knowledge of the civilization in which they live.

Our vision hasn’t changed since the beginning. If there has been a development, it has been that we place a little less emphasis on chronicling leftist atrocities—though we certainly give all the requisite warnings—and more emphasis on finding good “alternative” colleges, and on giving students who do attend modernized, rather decadent schools, guidance on how to craft the best college experience by finding good faculty, worthy programs, and organizations where they can go for support and fellowship—such as chaplaincies, pro-life groups, and independent student newspapers. We convey the political flavor of each school and the state of academic freedom there by giving each college as either a Red, Yellow, or Green light.

4. How are the college reviews compiled? Who are they written by?

Our essays are written or revised each edition by journalists, many of them with graduate degrees themselves, whom we bring up to speed on our vision of liberal arts education and guide carefully with a detailed list of questions and concerns that they should bring to their evaluation of each school. We rely for information on a wide variety of sources, but the most important one is our network of friendly faculty members and students who have signed up with ISI as members. We send out to them detailed questionnaires on the state of academic life, student life, and civic/religious freedom at each college. The contributing editors check and update all the facts—such as faculty members and programs we recommend, changes in administration, the state of the dorms—and also help us compile the list of recommended courses. Perhaps the most important resource we provide is a “do-it-yourself” core curriculum for each college—a list of courses currently offered there which, if a student takes them, will give him a broad and sound introduction to the liberal arts. Most schools used to require courses like these and a still—such as the University of Chicago—still do. But the vast majority of colleges followed Harvard’s lead in the early 1970s and turned their curricula into a Chinese take-out menu of electives and “distributional” requirements. We do the work that academic deans really should be doing at each school, and offer students a balanced, intellectually serious program that they can choose to take. Students who do so often come back to thank us!

You can purchase a copy of the College Guide here.