The Grammar School Curriculum in Context

The language, which is to say, the meaning of the creation account in Genesis is an endless fascination to me. Fascinated with opening sentences, I cannot avoid ranking the opening words of Genesis among the greatest and most powerful opening words of any recorded text: “In the beginning God created the heavens and the earth.” (Talk about world’s created in a single sentence!)

The first thing we learn about God is that He creates.

Then at the end of Hs creation, He says, “Let us make man in Our Image.” So the first thing we learn about man is that He was created to be the image of a creating God.

Part of the Human display of the image of God is his role in the creation: “Let them have dominion over the fish of the sea, and over the birds of the sky…. Be fruitful and multiply, and fill the earth and subdue it; and have dominion….”

We speak now of conquering nature, which seems to be one of the core drivers of the Enlightenment. But I must ask, does one conquer what one loves? There is a great difference between subduing something to bless it and conquering it, though I recognize that one could use the language of conquest in that way. That is not the impression I get, however, when I read the Enlightenment.

In reaction, the post-modern has determined that this man who fails continually in his dominion is wrong about himself – unworthy to take dominion (on this they are right) and not fit to do so. Man has become a part of the creation – the dust of the earth – and nothing more.

It’s the nothing more I have to plead with my fellow humans about. If we are nothing more, then maybe we won’t be so abusive of the creation, though I doubt it. Instead, I expect we would act like the creation does – fight to survive.

That is not our role. Our role is to exercise the dominion of fruitfulness. We can only faithfully execute that dominion if we recognize that it is both our blessing and our duty. It is how we become men and women, putting away childish things (like shirking responsibility).

If we are merely part of the creation, which we are, then we will act like the beasts and become bestial, following our instincts, demeaning reason, and losing the dignity of defined sovereignty for the fantasy of unlimited power.

But if we stand above the creation, which we also do, then we have taken on the awful responsibility of the well-being of the creation that God spoke into existence. If this is not humbling, there can be no hope. 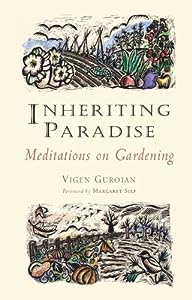 Adam and Eve were placed in a garden where they walked together with God and did not need to garden. But when they sinned and were expelled gardening began. Gardening symbolizes our race’s primordial acceptance of a responsibility and role in rectifying the harm done to the creation through sin.

While I would like to take Vigen up on two points (what he means when he says they “did not need to garden” before they sinned and whether gardening symbolizes or is our acceptance) the thought we need to understand is that it symbolizes (or is) “our race’s primordial acceptance of responsibility and role in rectifying the harm done to the creation through sin.”

The industrial age has always seemed to me to include, if not to be, a flight from precisely that responsibility. We don’t like working with our hands. We are the Thurston Howell’s of the world. Remember him, from Gilligan’s Island.

I am thinking of the episode where he did some digging or something and a pearl of sweat formed on his brow. If I remember correctly, his wife wanted to put it in a bottle. It’s fascinating to me that they were proud of that drop of sweat, which he had assiduously avoided all his life.

Just as death is not only our punishment but God’s mercy, so our sweat is not merely punishment but grace. The brow of the first Adam would sweat when he laboured in his garden, where thorns and thistles would be borne as well.

And on that day of days, that we will remember this coming Friday, the second Man, the New Man, the only Real Man so far, fulfilled punishment and discipline as life and grace.

To garden or to support gardening (you can extend garden and gardening to farm and farming – though not, I think, to agribusiness) is to take the responsibility for the creation given to us.

For all of these reasons and more, I believe that gardening must be a significant and integrating element of the elementary curriculum of a Christian school. I don’t think the Bible or the Christian tradition is comprehensible to people who shirk this duty. I know that many of its beauties are lost.