Lewis, Berry, and the Great Symphony 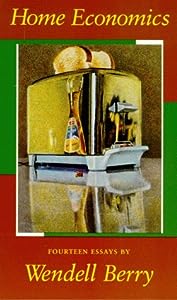 I returned from my Christmas holiday with family in Wisconsin to discover that my network is down, so I’m miles behind in communications – but I also found the reason why Wendell Berry is such an important writer. The preface to his collection of essays entitled Home Economics (North Point Press 1987) includes this paragraph, which I take to be a key to all his writings:

The essays in this book continue an attempt to construct an argument that I began twenty or so years ago. The subject of the argument is the fact, and ultimately the faith, that things connect–that we are wholly dependent on a pattern, an all-inclusive form, that we partly understand. The argument, therefore, is an effort to describe responsibility.

The application he makes at the end is fitting, but I would suggest that it expresses a very small fragment of the insight contained in this paragraph. “We are wholly dependent on… an all-inclusive form, that we partly understand.” Anything you read by Wendell Berry – poetry, novels, short stories, essays – explores this simple point.

Nor is it just Wendell Berry. CS Lewis, in his Chronicles of Narnia, The Discarded Image, and all of his works, operates on the same recognition. Indeed, until the early 17th century nearly everybody did.

It may be that here we have the simplest expression of the modern/post-modern mind in contrast to the ancient, classical, and Christian mind. To the modern, existence is an experiment, testing options to see which work. To the classical Christian, and really to any pre-modern philosopher apart from a few pre-Socratic Greeks (maybe), being is a symphony.

The limits to the implications of this distinction lie beyond the horizon of my vision. No matter that rests within my perspective can escape them, whether we speak of education (the locus of the modernist experiment), politics (that grand social experiment of the modern global era), entertainment, religion, business, advertising, raising children, economics, linguistics… whatever. I can see nothing unaffected in its very core by this distinction.

It used to be that people tried to figure out the relation of things to each other in a universal symphony, now people run experiments to expand their control.

Perhaps nobody understood this distinction better than CS Lewis in the previous generation. It seems that nobody understands it better than Wendell Berry in this one. That is why Christian classical educators need to read his works, especially Standing By Words and The Art of the Commonplace, though I also recommend Home Economics.

CS Lewis argued in The Abolition of Man that when you see through everything there is nothing left to see. Berry shows us that when we see through surfaces, there is a form left to behold. Behold it we must, for it is the source of wisdom.