The Gnostic Revolution in Which We Live 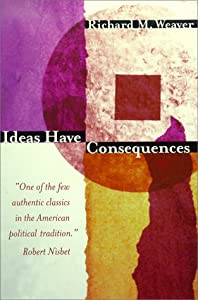 If you can read only one book for next sumer’s conference, make it The Abolition of Man by CS Lewis. Because it is short (63 pages including appendix and notes in my version), you can take your time and repeat your reading.

If you can read a second book, I recommend you make it Richard Weaver‘s Visions of Order. You may have heard of Richard Weaver because of his book Ideas Have Consequences, one of the most profound analyses of the wrong paths we have taken over the past century.

Visions of Order develops similar ideas in regard to specific areas of folly in the 20th century. I would particularly draw your attention to the last two chapters, Gnostics of Education and The Reconsideration of Man.

If you have read or been indirectly helped by Norms and Nobility, then you have benefited from this book. David Hicks quotes Mr. Weaver twice in his text, but the latter’s insights permeate Mr. Hicks’ book. For now, I will leave that as an undemonstrated assertion and leave it to you to judge whether I’m blowing smoke.

I have to do so because I want to draw your attention to some points Weaver makes in his impressive chapter seven and this is a blog, which means of course that it is hastily written and full of the author’s regrets.

What Weaver demonstrates in this chapter is that Progressivism is a Christian heresy, and he goes so far as to name it: it is that ancient, childish pain in the neck for the gospel called gnosticism – a silly, fantasy religion for those unable to accept reality as the place that provides all we need to be and do what God invites us.

He identifies two critical parallels between gnosticism and progressivism and then lists eight assumptions behind both that have permeated American education. The parallels, which I will not go into right now, are the doctrines of man and creation. In particular, the doctrine that man is essentially good, in a state of grace as it were, and that creation is not good enough for man and is, therefore, the source of evil. We accept the latter error, for example, when we blame the environment for human behavior or when we try to control people by controlling the environment.

Here I am going to list, without comment in this post, the 8 assumptions that gnosticism and progressivism share. See if you can find these in your own head or in your practice or in the way your school operates or in the political scene:

1. There is no such thing as a body of knowledge which reflects the structure of reality and which everyone therefore needs to learn. Knowledge is viewed as an instrumentality which is true or false according to the way it is applied to concrete situations or the way it serves the needs of the individual. Since… the essence of the world is change, there is no final knowledge about anything.

2. This being so, the object of education is not to teach knowledge, but to “teach students.”

3. As a corollary of the above principle, the child should be encouraged to follow his own desires in deciding what he should study, and what aspects of what subjects, and at what times.

4. The teacher must not think of himself as being an authority, because authority is evil.

5. The student should never be made afraid of anything connected with the school. Marks and competitions are bad because they instill feelings of superiority and inferiority which are undemocratic.

6. The mind is not to be exalted over the sense: democracy requires that sensory and “activist” learning be valued on a par with intellectual learning. The mentally slow or retarded are not to be made to feel that they are lacking; it is better to impugn the whole tradition of intellectual education than to injure the feelings of the less bright and the lazy. [emph. added]

7. Consequently there should be less education through symbols like language and figures and more through using the hands on concrete objects.

8. The general aim is to train the student so that he will adjust himself… to society conceived as social democracy.

That’s enough to think about for a day or two. In fact, Weaver argues convincingly that,

Progressive education is a wholesale apostasy, involving abandonment of the fundamental and long-held beliefs about man and the world.

That being so, all of us who are involved in education are bound by our love for Christ, the Incarnate Word and the transcender of every heresy, to examine our own curriculum, teaching approaches, and beliefs about man and cosmos.

Perhaps this helps to underscore the importance of our 2011 conference (not to mention 2009 and 2010). I spoke yesterday with Ken Myers and Dr. Vigen Guroian about their plenary sessions (Friday and Saturday morning) and both agreed that we must tackle this destructive heresy of gnosticism, whose utopian fantasies permeate our politics (Progressivism), our entertainment (e.g. The DaVinci Code), our morals (the sexual revolution, Peter Singer, etc. ), our arts (e.g. painting to manipulate the viewers emotions rather than tell the truth), our education (see above), and, I would argue, even our churches (self-centered appetite driven or hyper-intellectual Christianity, but especially marketing and music).

May I urge you: